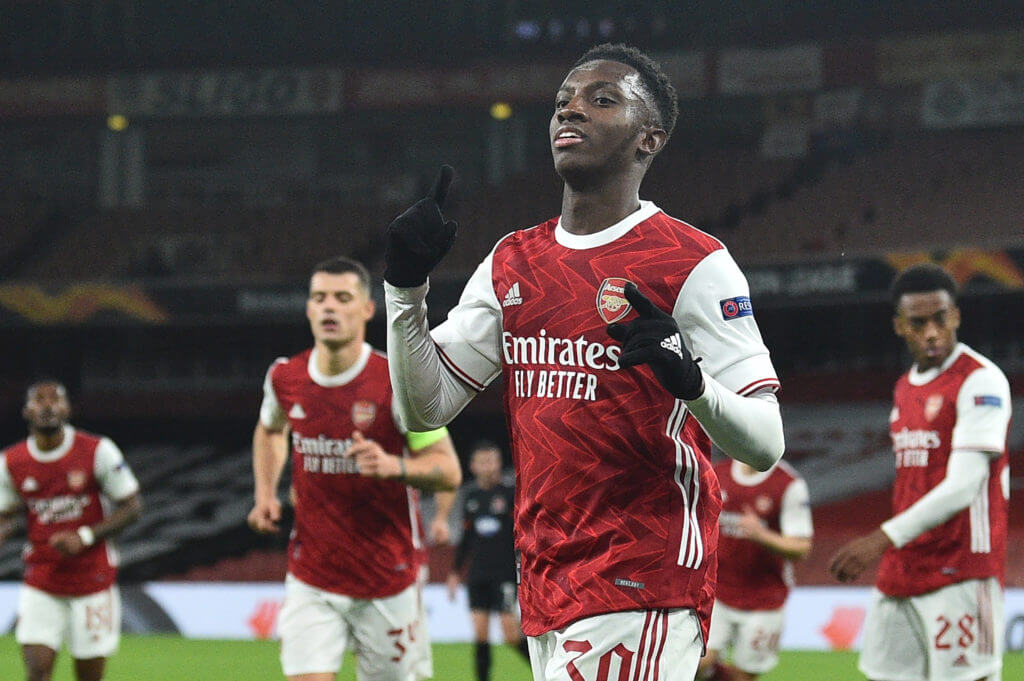 Arsenal secured back to back wins in their Europa League games, while Tottenham Hotspur suffered a 1-0 defeat against Royal Antwerp on Thursday.

Arsenal 3-0 Dundalk: Mikel Arteta will be pleased to see how his squad players stepped up to the plate and secured all three points to consolidate their top position in Group B.

Eddie Nketiah scored from close range to give the Gunners the lead, and Joe Willock scored shortly afterwards. Nicolas Pepe’s brilliant effort just after the break killed off any hopes of a potential comeback from the visitors.

AEK Athens 1-2 Leicester: Jamie Vardy scored from the spot in the 18th minute after he was fouled by keeper Panagiotis Tsintotas to give Leicester the lead.

Hamza Choudhury doubled the advantage a few minutes later. Although Muamer Tankovic netted after the break to keep the game exciting, Leicester did well to preserve the lead and maintain their perfect start in Group G.

Royal Antwerp 0-1 Tottenham: A mistake from Ben Davies ensured the Belgian side went top of Group J. Lior Refaelov smashed past Hugo Lloris with Dieumerci Mbokani providing the assist for the goal.

Although Jose Mourinho made four changes at the start of the second half, Spurs struggled to create enough clear-cut chances. Mbokani blazed over from three yards out while Simen Juklerod also missed a fine chance for the hosts.

Rangers 1-0 Lech Poznan: Alfredo Morelos scored the only goal of the match after coming on as a second-half substitute, and equalled Ally McCoist’s European goalscoring record for Rangers.

With his victory, the Gers have made a strong start in the competition. Steven Gerrard’s side have now secured their eighth straight win in all competitions, and they are now in a commanding position alongside Benfica in Europa League Group D.

Lille 2-2 Celtic: The Bhoys let slip a two-goal advantage to salvage a draw against the French outfit. A brace from Mohamed Elyounoussi and a Scott Bain penalty save meant Celtic were heading towards their first win in four games.

However, goals from Zeki Celik and Jonathan Ikone meant, the Bhoys have now picked up just one point in Group H.