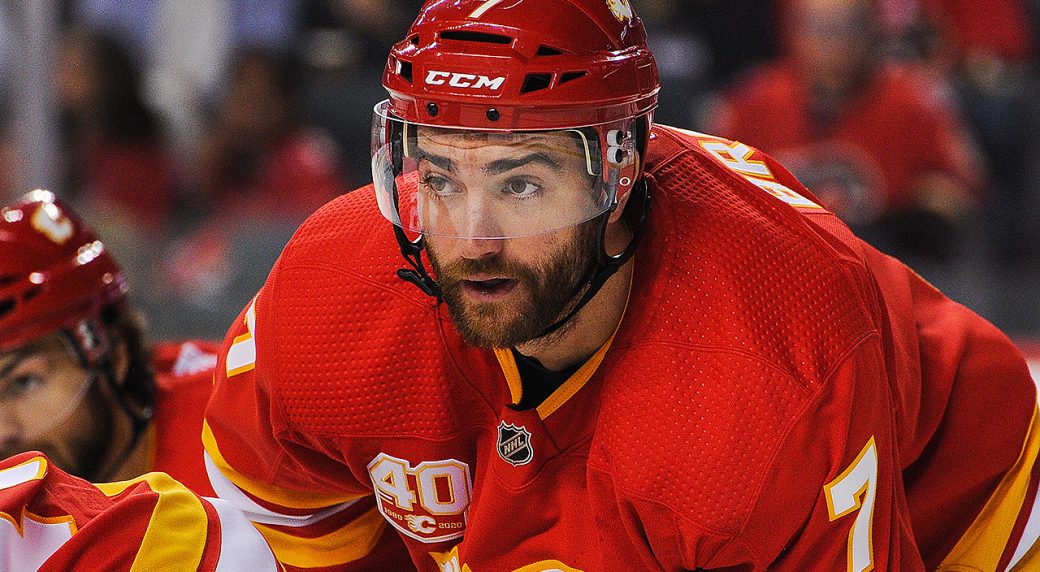 With Day 1 of NHL free agency in the books, Justin Bourne shares his quick-hit thoughts on each of the notable moves made.

T.J. Brodie to the Leafs for four years at $5 million per: Given the Leafs’ proximity to the salary cap and their pressing need for someone who could play top-four RD, this was quite literally the best Oct. 9 add they could’ve made. Anytime you acquire a guy like Brodie for no assets – as in, a straight UFA deal where other teams would covet the player as well – it’s not going to be a bargain deal, per se, but it’s still reasonable.

Think we should sign this kid? Just did pic.twitter.com/0jQOHGtepV

Corey Crawford to the Devils for two years and $3.9 million per: On SN’s Signing Season show, Kris Versteeg made the case for Corey Crawford as the most underrated goalie of his generation (he compared him to Grant Fuhr), and it’s a sound one. By eye test, his teammates say he rose up and made the big saves when they needed him most, and the fancy stats say he’s been better than league average in goals saved above average in five of the past six seasons, so any way you want to look at Crawford he’s a good bet at that term and those dollars.

Jacob Markstrom to the Flames for six years at $6 million per: There are certainly goalies who excel into their late 30s – Pekka Rinne won a Vezina at 36 and Marc-Andre Fleury was fourth in voting at 35 – so giving a 30-year-old six years isn’t definitely a bad idea. And even though it probably is a bad idea, I still think he’s a top-half-of-the-league starter (for less per than Matt Murray!) and will be for a few years, meaning the Flames should have stability at the one position you crave it the most, for at least a few seasons to come.

Braden Holtby to Vancouver for two years at $4.3 million per: I love this for the Canucks, who have a guy who might be ready to be a starter in Thatcher Demko, but just in case he’s not yet, they now have a guy who can almost certainly give them league-average goaltending while he gets there (note: I do not consider “league-average goaltending” remotely an insult). And if Demko is ready, it’s a lot easier to stomach $4.3 million in back-up/tandem insurance than it would’ve been Markstrom’s ticket.

Henrik Lundqvist signs for one year and $1.5 million with the Capitals: I realize I’m heaping a lot of praise on goaltenders here, but these are primarily short-term, reasonable cost deals for proven performers we’re talking about here (and often to mentor a young guy). Hank fits the mold, and maybe in the best way possible – his deal is even shorter and cheaper than the ones mentioned above.

Torey Krug to St. Louis for seven years at $6.5 million per: GMs get in trouble when they go, “I don’t care if this is the most prudent move, I love the player and I want him,” and I want you all to know that if I was a GM, Krug would be the guy I’d get burned on – I’m a big fan. That said, I don’t think the Blues will get bad value back from this deal as he’s cheaper and a year shorter than Pietrangelo would’ve been (and they’re a cap-pressed team), and while they aren’t the same level of player, it keeps the Blues from taking an overly large step back.

Mark Borowiecki to Nashville for two years at $2 million per: Every time I want to completely write Nashville off, David Poile finds a bunch of value guys who are tough to play against and will compete – it’s like his super power. Finding elite scorers, however, is not, so guys like Boro just ensure that Nashville will stay competitive, while never really threatening for the Cup.

Nick Cousins to Nashville for a year and $1 million: My thoughts. You already have them.

Cam Talbot to Minnesota for three years and $3.66 million per: I don’t really loathe any goalie deal given out so far. I don’t have Talbot as a top-end starter – it may even be generous to say he’s mid-tier – but that opinion seems fairly commensurate with the modest cap hit and term, so again, this looks entirely “fine.”

Paul Stastny got traded to Winnipeg for a pick: This isn’t a UFA signing, but I do feel the need to mention it because, way to go Winnipeg. UFAs don’t generally seek out the ‘Peg, so you may have to overpay one to get what you want … unless you just trade for a guy who fits your needs perfectly and who only has a single year of term left on his deal.

Wayne Simmonds signs a one-year, $1.5-million deal with Toronto: This one checks all the boxes for the Leafs, like the Brodie deal. They wanted to get harder to play against, but Dubas wants those guys to be able to play too, so yeah, “need” boxes get checked here (and you have to feel good that he’s not rehabbing this off-season, he’s able to train properly).

Bobby Ryan takes a one-year, $1-million deal in Detroit: What I love about this move is that it’s two sides “taking advantage of each other” for mutual benefit. Yzerman and the Wings get a motivated, healthy skill guy who can help drag their team up from the depths of the league for dirt cheap, and Ryan gets an opportunity to play good minutes in an advantageous roster slot to prove he’s got a lot left to offer in his career.

Pat Maroon signs back in Tampa for two years at $900K: I imagine there was a lot Maroon liked here aside from the dollars (given I’m sure he could’ve earned more elsewhere), and Tampa keeps a nice fringe piece because of those perks. In Tampa he won’t pay taxes, the weather is lovely all winter and he’ll once again have the chance to compete for the Cup.

Radko Gudas signs a three-year, $2.5-million per deal with Florida: It remains to be seen what Gudas has left to offer, given there’s been some real signs of decline in his game over the past few years. But the things he offers – a physical edge on top of being a capable player – aren’t going to entirely disappear overnight, meaning he should provide something Florida could use more of on their back end (with the third year clearly being the trouble part of this deal).

Kyle Turris signs a two-year deal with the Oilers for $1.65 million per: This is brilliant by the Oilers, grabbing a buy-low guy for two years with real upside (like the Ennis deal!). And with a cap hit that low, and the low expectations that come with it, it’s almost hard to see a scenario where Turris underperforms this contract.

Anton Khudobin signs for three years at $3.33 million per season back with Dallas: I would’ve loved basically any Khudobin deal (near these dollars or even a bit higher) that was two years long. I don’t hate the money, but this isn’t exactly a proven starter in the NHL, and he’s not exactly young, so a third year seemed unnecessary here.

Mark Jankowski to the Penguins for a year at league-minimum $700K: I mention this one because I love it for Pittsburgh. Very useful player who’s just 26 and can fulfill their needs in their bottom six in terms of both style and cost.

Derek Grant to the Anaheim Ducks for three years at $1.5 million per: The Ducks UFA day had big “we need guys, we’re not a destination, so we’re gonna have to pay guys” energy. A third year for Derek Grant, who’s fine enough and can score some goals for an NHL team, seemed unnecessary (there’s a trend with a lot of these deals here, isn’t there?).

Kevin Shattenkirk to the Ducks for three years and $3.9 million per: This is at the very top-end of what I thought would be reasonable for Shattenkirk in both term and dollars, so, kudos to him for gettin’ his (again) after a “prove it” year. For teams teasing the bottom of the league, you just need some decent guys to give your kids the chance to develop, and Shattenkirk will provide them that.

Jack Johnson to the Rangers for a year and $1.15 million: I root for Johnson to get paid given some of the things that have happened in his personal life off the ice. Now that we’ve gotten that out of the way, he’s not a very good NHL defenceman anymore and it’s doubtful the Rangers got better with this addition.

Justin Schultz signs with the Capitals for two years at $4 million a season: This feels like a lot of money for what the Caps might get in return through 2022. I like Schultz’s skill set, this just feels like a case of paying a player for what he’s done, not what you expect him to do.

Chris Tanev to the Flames for four years at $4.5 million a season: They lost a 30-year-old right side defenceman in Brodie, they gain a 30-year-old right-side defenceman in Tanev, for a savings of $500K per season (and the correlating small drop in talent). The situation here is clear: if they get Tanev for four years and 75 games a season, you love the deal, but he’s only hit 70 games in a season once, and has been below that (sometimes well below that) in each of the five seasons since.