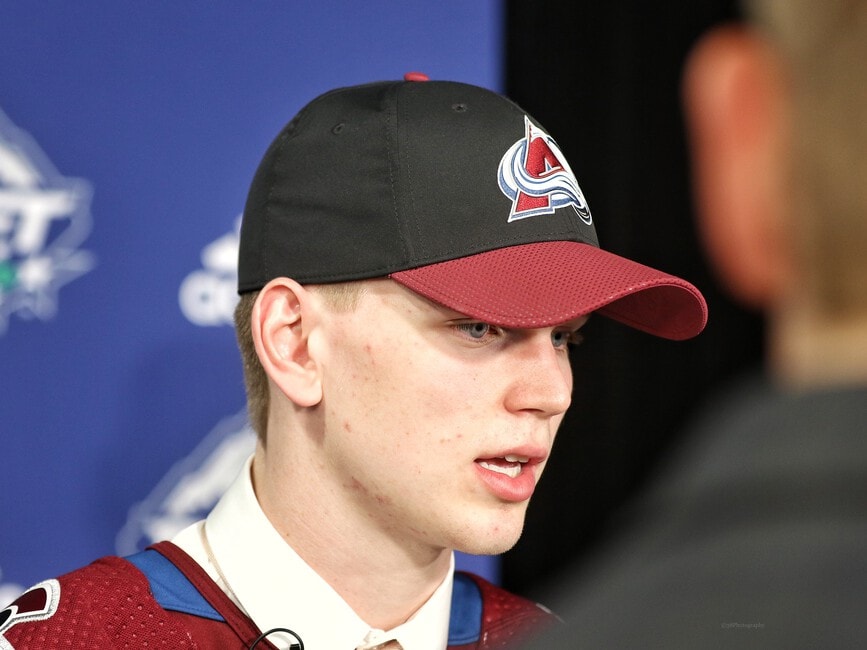 The 2020 NHL season has been one to remember (or forget) for obvious reasons.

Every season has its storylines that make them unique from the others. But it’s hard to compete with a season that was postponed mid-March, and didn’t resume until August with a brand new playoff format that included an extra round. Top it off with a five-round playoff bracket between two bubbles with no fans in the building, and you’ve got yourself a type of season we may never see again.

Because the playoffs were pushed until August, we were treated to an NHL Entry Draft that took place in October. But not just any draft, a virtual one that saw the superstars of tomorrow celebrating with their family via video call instead of inside a packed arena.

Despite the strange circumstances, the draft proceeded as normal and each team got a healthy new batch of prospects as per usual. And today, we’re going to have a look at the Colorado Avalanche and some of their most promising up-and-comers to eventually don the burgundy and blue.

The Avalanche didn’t have too many picks to work with in the 2020 Draft, but they used the third-rounder acquired from the Toronto Maple Leafs in the Tyson Barrie/Nazem Kadri trade to take Jean-Luc Foudy at 76th overall. The younger brother of Columbus Blue Jackets prospect Liam Foudy, Jean-Luc burst into the league in 2018-19 and made an immediate impact. He finished his 2019-20 campaign with 43 points through 59 games.

He has been said to possess the best speed in the draft class, which seems odd considering he slipped until midway through the third round. But the fact that his speed is praised this much could do wonders for him as his development continues. He won’t turn 19 until May, so the Avalanche have lots of time to work with him and furnish his all-around game before bringing him to the pros.

Despite being a native of Naantali, Finland, Sampo Ranta is no stranger to North American hockey as he’s been playing/developing here since 2016. Coming up through the ranks in the USHL and spending the last two seasons with the University of Minnesota, Ranta has proven to be nothing but consistent ever since his draft year.

After posting 16 points through 36 games in his freshman season and 20 points through 35 the following year, Ranta has simply been a solid offensive player year in and year out. He also represented Finland at the World Junior Championship (WJC) last year and posted a goal and an assist through seven games. His numbers may not be eye-popping, but with consistent production and a good mix of size and skill, he’s looking like a pretty safe pick for the Avs.

You could call the Avalanche’s 2019 Draft a good one solely based on their two first-round picks in Bowen Byram and Alex Newhook, but Alex Beaucage is looking more and more like he shouldn’t have slipped to the third round. He finished last season with 40 goals and 70 points through 63 games, and he’s off to a sizzling start for the Huskies this season with six goals and nine points through four games, albeit a small sample size.

One quick look at Beaucage’s game tells you that he’s a bona fide goal scorer. He has a lethal wrist shot and good size to go along with it, standing at 6-foot-2 and 192 pounds. Since the Avalanche already have tons of pieces to work with up front, there’s no rush to get Beaucage to the NHL. A couple more seasons in the juniors/minors to work on his skating and develop his all-around game could see him make an immediate impact if he ever reaches the show.

In every draft, a couple of teams go off the board in the first round, which results in a few projected first-rounders seeping into the early second round. The Avalanche took note of this and grabbed Conor Timmins with the first pick of the second round. The 6-foot-2 blueliner went off the map for about 18 months after suffering a head injury in the 2018 OHL Finals, and it was a long road to recovery. But to say he bounced back strong is an understatement.

After missing the entire 2018-19 campaign due to recovery, he jumped into the Colorado Eagles’ lineup in 2019-20 and instantly made an impact, finishing the season with 27 points in 40 games. He also got a tiny taste of NHL action both in the regular season and the postseason, playing in two games apiece. It’s tough to say if Timmins will start the season with the Avalanche this year, but there’s no doubt in my mind he will be given a look at the very least and will be one of the first phone calls barring injury to the defensive core.

As if the Avalanche didn’t pillage the Ottawa Senators enough with the acquisition of the pick that would become Byram for Matt Duchene, they also managed to acquire Shane Bowers in the deal. A native of Halifax, Nova Scotia, Bowers was selected 28th overall by the Senators in 2017 and followed up the draft with two successful seasons at Boston University.

He made his pro debut last season and didn’t fail to impress, putting up 27 points through 48 games in his rookie AHL campaign. Bowers is said to be a dangerous presence near the front of the net, and at 6-foot-2 and 187 pounds, he uses his size to get in tight and score the “ugly” goals. It’s unlikely we see Bowers in the NHL full time for at least one more season, but he’s a power forward who could make an instant impact when he gets the call.

The first prospect on this list drafted outside of the first round and the only goalie to make the list, I believe Justus Annunen could be the most underrated prospect here. After an impressive playoff run with Karpat U20 of the Liiga Junior League, the Avalanche took Annunen with their third-round pick in 2018. His first year after being drafted wasn’t anything to write home about, sporting a 2.77 goals against average (GAA) and a save percentage (SV%) of .891 with Hermes of the Mestis league, but he truly broke out in 2019-20.

In his first full SM-Liiga season, he posted a record of 15-5-3 with a 1.77 GAA and a .929 SV%, making him one of the league’s best goalies that year. The Finnish netminder also represented his home country at the 2020 WJC where they would fall to Sweden in the bronze medal game. Annunen is far and away the best goaltending prospect the Avalanche have, and as of now he holds the best shot at becoming the next big thing between the pipes.

It’s far too early to deem anybody from the 2020 Draft a steal, especially considering the draft was only a week ago. However, I am extremely high on this pick for the Avalanche. Justin Barron was initially projected to be a top-15 pick, but after being diagnosed with a blood clot in early December, his draft stock plummeted. He was cleared to play almost three months later, and finished his 2019-20 campaign with 19 points through 34 games.

Barron is a right-handed defenseman who has good size at 6-foot-2 and just shy of 200 pounds, and it could be argued that he has almost as much upside as fellow 2020 Draft pick Jamie Drysdale, who went sixth overall to the Anaheim Ducks. Avalanche general manager Joe Sakic didn’t appear to be worried about the blood clot impacting his future health, since they decided to take a flyer on him with their first rounder. And the reality is, the risk is well worth the potential reward. Having Barron right behind Cale Makar on the right side could be a dangerous combination.

Based on the style of game he plays, his path before and after the draft, and where he was selected, Newhook reminds me a lot of what the Avs thought they were getting with Tyson Jost back in 2016. Newhook absolutely terrorized the British Columbia Hockey League in his draft year with 102 points through 53 games for the Victoria Grizzlies. He then followed up his performance with an impressive freshman season at Boston College with 42 points in 34 games.

With the one-two punch of Nathan Mackinnon and Nazem Kadri up the middle, there’s no reason to rush Newhook’s development. He’s expected to return to Boston College for his sophomore season and when the Avalanche feel he’s ready for the big leagues, they’ll bring him back. His explosive speed and relentlessness chasing the puck suggest he could become a key part of the team’s offensive core when he gets to that point.

An impressive sophomore season with HC Dynamo Pardubice of the Czech League and an outstanding performance at the 2018 WJC earned Martin Kaut a selection in the first round. And since then, his development has been sure and steady. He immediately moved to North America to play for the Colorado Eagles of the AHL and really upped his game in his second AHL season, putting up 18 points through 34 games. He also got his first taste of NHL action where he posted three points through nine games.

Standing at 6-foot-2 and 190 pounds, his size along with his shooting and passing ability make him a potential offensive threat at the NHL level. He’s currently back in the Czech Republic playing for HC Dynamo where he has one point through four games. Whenever the NHL/AHL seasons get underway again, it’s possible Kaut could challenge for a spot in the bottom six. And if he doesn’t make it, a little extra time in the minors never hurt anyone. Either way, the Avalanche have an exciting winger on their hands.

After robbing the Ottawa Senators of a top-five pick in the Duchene trade, the Avalanche were given an opportunity to bolster an already good-looking prospect pool. And they did just that in selecting Byram. The 6-foot-1 blueliner finished his COVID-shortened 2019-20 season with 14 goals and 52 points through 50 games for the Vancouver Giants.

There really isn’t much to dislike about Byram as a prospect. He’s a workhorse in all three zones and can help prevent goals just as effectively as he can contribute offensively. Plus, if he’s anything like the defenseman the Avalanche took fourth overall in 2017 (some guy named Cale Makar, you may have heard of him), then I’m sure they’ll be more than happy with the outcome of this pick. With Sakic sending defenseman Nikita Zadorov to the Blackhawks and the departures of unrestricted free agent defensemen such as Mark Barbeiro, it’s hard to imagine the Avs won’t at least give Byram a look to start next season.

Overall, the Avalanche have a prospect pool that’s absolutely worth getting excited over. Sakic has done nothing short of an incredible job stocking the cupboards both through the draft and trades, and given that the Avalanche are already one of the league’s top cup contenders, the sky is the limit with the amount of talent they have waiting in the pipelines.

Benning, Canucks salvage their weekend with Nate Schmidt trade
Maple Leafs’ TJ Brodie on his new team, his new number and his game