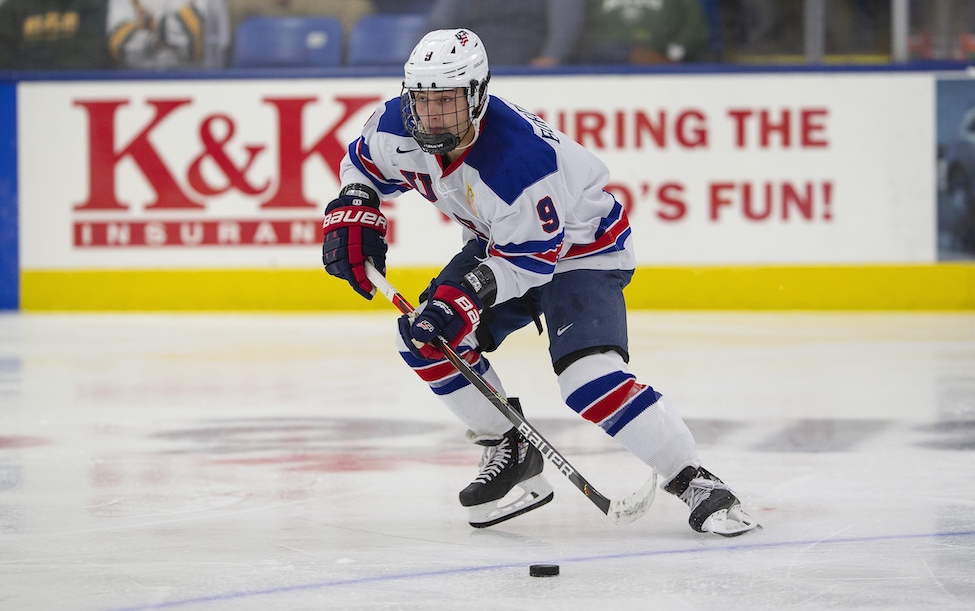 The Ottawa Senators sign one of their second-round picks from the 2020 NHL Entry Draft, a San Jose Sharks’ second-round selection from the 2020 Draft excels in his first NCAA season and two top prospects from the Ontario Hockey League (OHL) are seeking loans to Switzerland.

The Senators announced on Monday that they’ve agreed to a standard three-year, entry-level contract for Egor Sokolov. Drafted 61st overall in the 2020 NHL Entry Draft, he spent the 2019-20 season in the Quebec Major Junior Hockey League (QMJHL) with the Cape Breton Eagles. He amassed an impressive 46 goals and 46 assists for 92 points in 52 games played, which was good enough to finish third in league scoring and first in goals scored. Representing Russia at the 2020 World Junior Championship, he won a silver medal and registered three goals and one assist in seven games played.

In a press release from the team, Senators general manager Pierre Dorion had this to say about the signing.

To Egor’s credit, he’s worked especially hard for this. Despite initially being undrafted, he applied himself to improve many facets of his game to the point where he led the Quebec league in goals last season. We were pleased to be able to select him where we did last month and look forward to seeing his career progress.

Sokolov will have to wait to begin his 2020-21 season considering he didn’t return to the QMJHL. He’s slated to play in the American Hockey League (AHL) with the Belleville Senators. Sokolov looks like the definition of a late-bloomer and the Senators will be hoping he can adjust quickly and make his way to the NHL as soon as possible.

Sharks prospect Thomas Bordeleau is off to a fantastic start to his NCAA career with the University of Michigan. Drafted 38th overall by the Sharks in the 2020 NHL Entry Draft, he spent the 2019-20 season with the United States National Team Development Program. He amassed 16 goals and 30 assists for 46 points in 47 games played and led the U.S. National U18 Team in scoring.

Through four games played, Bordeleau is tied with 2021 draft-eligible forward Kent Johnson for both the team and NCAA lead in points with two goals and five assists for seven points. He scored a beautiful overtime winner in Friday’s 2-1 victory over Wisconsin. Michigan has now started the season 4-0 and are one of the NCAA’s best teams early on. If allowed to leave, Bordeleau will be a key player for the U.S. at the 2021 World Junior Championship.

After Brandt Clarke’s loan move to Sweden fell apart, it looks like two more top prospects from the OHL could be on their way to Europe. Flint Firebird’s forward Brennan Othmann is on his way to Switzerland to play for EHC Olten of the Swiss League. He was drafted second overall by the Firebirds in the 2019 OHL Priority Selection and amassed 17 goals and 16 assists for 33 points in 55 games played during his rookie season. Othmann is the nephew of the former EHC Olten player Robert Othmann who played for the team from 2002-2007. Brennan has a Swiss passport, which made the move possible.

On the other hand, EHC Olten were also attempting to secure the loan of another top prospect from the OHL Mason McTavish. The Peterborough Petes forward was born in Rapperswil, Switzerland, where his dad played professional hockey for 10 seasons. He was drafted fifth overall by the Petes in the 2019 OHL Priority Selection and amassed 29 goals and 13 assists for 42 points in 57 games played during his rookie season. Unfortunately, McTavish does not have a Swiss passport and was not allowed to enter the country from Canada. If the pandemic situation improves, then he might be able to fulfill the loan in the future.

How 10 NHL players and prospects are faring with European clubs
Forged in the crucible of the courtroom, Allan Walsh won’t stay quiet