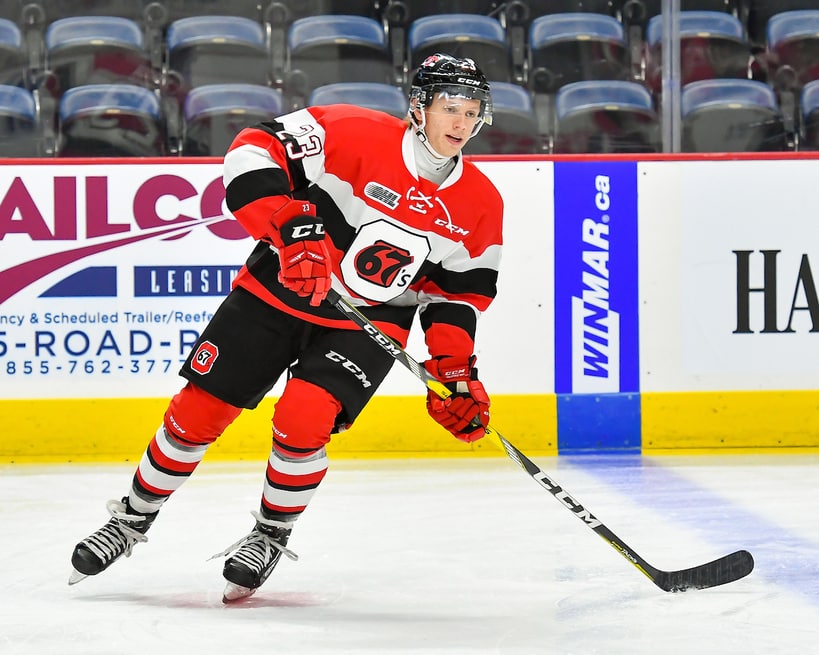 Red Savage, son of former NHL forward Brian Savage, recorded a hat trick in the U.S. National Under-18 Team’s 9-1 victory over Adrian College on Sunday Night. He recorded a goal in each period to record his first hat trick with the USNTDP. He’s been heating up lately and has five goals and two assists for seven points in his last four games played. On the season, he has amassed nine goals and 12 assists for 21 points in 19 games played. The Scottsdale, Arizona, native is eligible for the 2021 NHL Entry Draft and should hear his name called sooner than his dad who was drafted 171st overall by the Montreal Canadiens in the 1991 NHL Entry Draft.

During the 2019-20 season Savage played for the U.S. National Under-17 Team in which he registered eight goals and 17 assists for 25 points in 30 games played. He represented Team USA at the Under-17 World Hockey Challenge where he won a silver medal and posted one goal and three assists for four points in six games played. Red will follow in his Dad’s and brother Ryan’s footsteps when he attends Miami University for the 2021-22 season.

2021 draft-eligible prospect Matthew Coronato is off to an unbelievable start to the 2020-21 United States Hockey League (USHL) season. He’s currently on an 18-game point streak that dates back to the beginning of the season, he has goals in all but four games and is currently riding a five-game goal-scoring streak. Through 18 games played, he has amassed 17 goals and 22 assists for 39 points. He leads the entire USHL in scoring and is one of three Chicago Steel players who hold the top three spots in league scoring.

He has 11 multi-point games this season including three four-point games. Coronato is one point off of achieving his point totals from the 2019-20 season in 27 fewer games played. During the 2019-20 season he amassed 18 goals and 22 assists for 40 points in 45 games played. This will be his final season in the USHL as he is committed to Harvard University for the 2021-22 season.

Rossi Out Indefinitely With Injury

Wild prospect Marco Rossi is out indefinitely with an upper-body injury. Considered a dark-horse candidate for the Calder Trophy, he was slated to have a big impact on a Wild team that is in the midst of a transition. Former captain Mikko Koivu has moved on from the team and Russian phenom Kirill Kaprizov has finally made the journey over from the KHL. The team lacks a true number one center and are relying on Nick Bonino, Nick Bjugstad and Joel Eriksson Ek to carry the load this season.

Rossi was one of the top prospects eligible for the 2020 NHL Entry Draft, but fell to the Wild at ninth overall likely due to his size. The 5-foot-9 center dominated the Ontario Hockey League (OHL) during the 2019-20 season, amassing 39 goals and 81 assists for 120 points in 56 games played. He was the Canadian Hockey League Top Scorer and was awarded the Red Tilson Trophy for OHL Most Outstanding Player.

Wild general manager Bill Guerin had this to say about the chances of Rossi making the team in an interview before Christmas.

It’s kind of a delicate balancing act with a young player like that. You want him to make the team, you want him to have success right away, and sometimes you kind of let temptation get the better of you and you put him on the team, and it’s not always the best thing. So, we want to make sure we do the right thing for him at the right time.

Rossi represented and captained Austria in the 2021 World Junior Championship. He finished pointless in four games as Austria failed to secure a victory at the event. There has been no update on how severe the injury is and how long it will keep him out, but nonetheless it’s a big blow to the Wild who were entering the season with optimism.