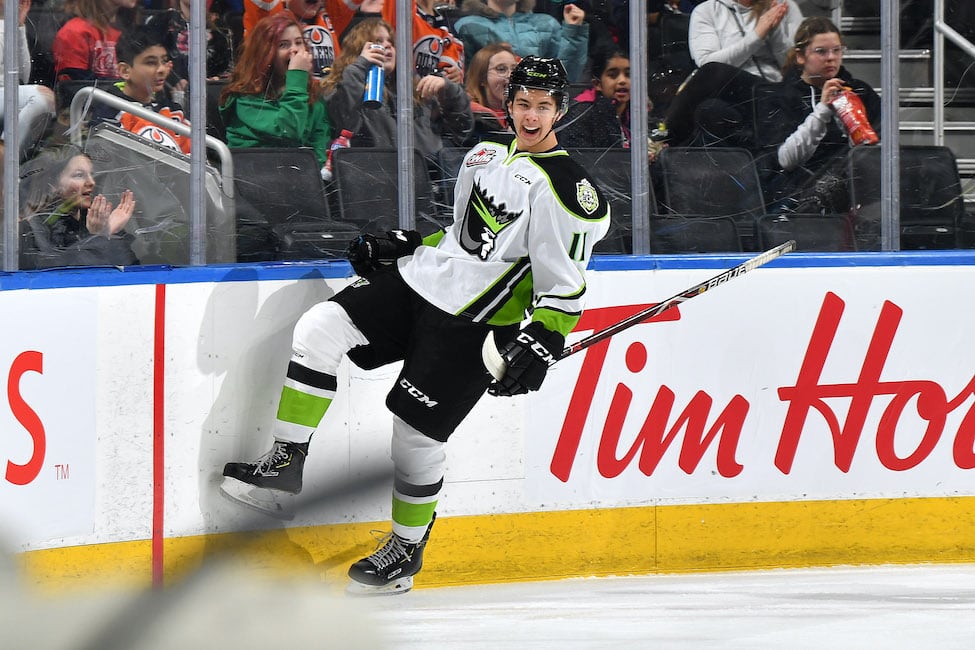 A top prospect for the 2021 NHL Entry Draft gets on the board in the Finnish Liiga, a budding Western Hockey League (WHL) superstar dominates on loan in the Alberta Junior Hockey League (AJHL), and an Anaheim Ducks goaltending prospect continues to excel playing in Finland.

Räty On the Board in Liiga

The battle for first overall in the 2021 NHL Entry Draft is underway and the early favourite, dating back to last year, has been Finnish forward Aatu Räty. Playing for Kärpät in the Finnish Liiga, he had gone pointless in his first three games of the season before scoring two goals on Saturday in a 4-3 victory against Ässät. The goals are his first of the Liiga season, but not the first of his career as he had two goals and two assists in 12 games played with Kärpät during the 2019-20 season. His first goal, shown below, showed some nice positioning in front of the net as he buried a pass from behind the net.

THW’s Mathieu Sheridan had this to say about Räty in his “5 Finnish Players to Watch” article.

With bigger ice surfaces in Finland, Raty has taken the space and used it to his advantage. He is able to corral a pass from his defenders while breaking through the neutral zone and doesn’t even lose stride. He uses his momentum to drive the net and create a high danger scoring chance. When the puck is in the defensive zone, Raty is very effective and cutting opponents time and space off and limiting their scoring chances. He plays with an active stick and drives his opponents to the outside and effectively closes passing lanes in the process.

During the 2019-20 season, Räty primarily played for Kärpät U20 in Finland’s Jr. A SM-liiga in which he amassed two goals and 19 assists for 21 points in 30 games played. He featured for Finland in the 2020 World Junior Championship (WJC) and was the youngest player in the entire tournament. He produced two goals and one assist in seven games played. He’ll be an impact player for Finland in the 2021 WJC when it begins on Dec. 25.

On Wednesday, Dylan Guenther was loaned to the Sherwood Park Crusaders of the AJHL until Dec. 20. (from ‘Top NHL prospect Guenther comes to the Cru,’ Sherwood Park News, 10/30/2020) Guenther is a member of the Edmonton Oil Kings and he’s another player who could challenge for first overall in 2021. Fast forward to Sunday and he’s torched the league in his first two games with the Crusaders. The AJHL is currently playing exhibition games to start the season and Guenther has three goals and four assists in two games played so far. His debut against the Spruce Grove Saints on Friday showcased the talent that earned him the Jim Piggott Trophy for WHL Rookie of the Year during the 2019-20 season.

He has one goal and and three assists in that game and followed that up with two goals and one assist against the Saints on Saturday night. He’s proving to be a nightmare for AJHL competition and the fact he’s on loan until December means we’ll see many more nights like these. It wouldn’t be surprising to see him finish his time with the Crusaders producing over two points per game.

During the 2019-20 season Guenther amassed 26 goals and 33 assists in 58 games played for the Oil Kings. Despite being a rookie, he finished third in team scoring and first in goals. He’s one of the top prospects out of the WHL for the 2021 NHL Entry Draft and all eyes will be on him one he returns for the start of the WHL season.

Dostal On Fire in Finland

Ever since joining Ilves in the Finnish Liiga, it’s been smooth sailing for Lukas Dostal. The Czech Republic native was awarded the Urpo Ylönen Award for the league’s best goaltender after an impressive 2019-20 season. He finished with a 27-8-6 record, a .928 save percentage (SV%), and a 1.78 goals against average (GAA). If you thought it couldn’t get any better you would be wrong. Through nine games in the Finnish Liiga this season, he has an 8-1-0 record with a .947 SV% and a 1.57 GAA. He won his sixth game in a row on Saturday, making a season-high 33 saves in the process.

He is by far and away the best goaltender in Finland at the moment and it won’t be long now before he makes his way to North America to try his luck in either the NHL and AHL. With Ryan Miller potentially moving on, the path is a little bit clearer for Dostal in the Ducks organization. With nothing left to prove in Finland the Ducks could opt to bring him over to the AHL once the season starts in February.