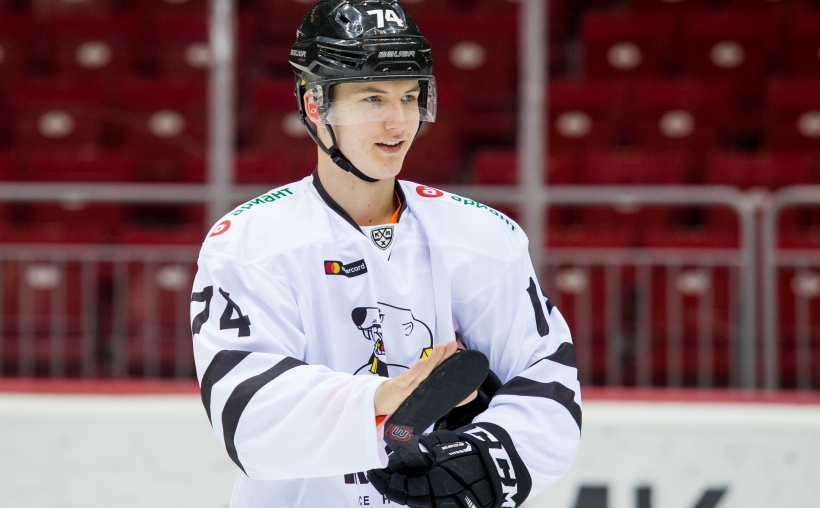 A New York Rangers former ninth-overall pick is excelling in his start to the 2020-21 KHL season. A top Detroit Red Wings prospect registered his first goal in the Swedish Hockey League, and a recent draftee of the Philadelphia Flyers had a night to remember in the Quebec Major Junior Hockey League.

Rangers prospect Vitali Kravtsov is off to a hot start in the KHL despite missing seven games. He has goals in back-to-back games since returning and has eight goals and ten points in 13 games played. Kravtsov is on loan to Traktor Chelyabinsk until the start of the 2020-21 NHL season.

Drafted ninth overall in the 2018 NHL Entry Draft, he spent the 2019-20 season split between the American Hockey League and Russia’s KHL and VHL leagues. With the Hartford Wolf Pack, he put up six goals and nine assists in 39 games played. He played 11 games with Traktor amassing two goals and one assist, as well as two assists in three games with Chelmet Chelyabinsk in the VHL.

His offensive production has increased significantly this season. He’s tied for third in the league in even-strength goals with seven and tied for seventh in goals with eight. Kravtsov has always been known as a volume shooter, so it’s no surprise he’s ranked fourth in shots on goal per game with 3.8. He became the 11th KHL player in history to reach 40 career points before the age of 21. Rangers fans have a lot to be excited about with the addition of Alexis Lafreniere, the sophomore season for Kappo Kakko and the emergence of Kravtsov.

Earlier this month the Red Wings loaned German defenseman Moritz Seider to Rögle BK of the Swedish Hockey League for the full season. He’s played in four games and picked up one goal and four points. His first goal came against Skellefteå AIK on Saturday, a seeing-eye shot that found the back of the net.

Drafted sixth overall in the 2019 NHL Entry Draft, he spent last season in the American Hockey League with the Grand Rapids Griffins where he amassed two goals and 22 points in 49 games played. He also starred for Germany at the 2020 World Junior Championships, posting six assists in seven games played. It was his first season in North America after coming over from Adler Mannheim in the Deutsche Eishockey Liga.

There was no mention of an NHL out-clause for Seider, but he could return to the Red Wings before the end of the SHL season. He’s off to a nice start and a full season playing against men will be great for his development. Seider is also in line to be an important player for Germany at the World Juniors again. Paired with Tim Stuetzle, John-Jason Paterka, and Lukas Reichel, Germany should be a dark horse to win the gold medal.

Flyers prospect Elliot Desnoyers had a night to remember for the Halifax Mooseheads in the Quebec Major Junior Hockey League. The Saint-Hyacinthe, Quebec native scored four goals in a 10-2 victory over the Cape Breton Eagles. The performance earned him CHL Player of the Night honors and likely a place on the Team of the Week.

Drafted 135th overall in the 2020 NHL Entry Draft, he spent the 2019-20 season in the QMJHL with the Moncton Wildcats where he amassed 11 goals and 35 points in 61 games played. Desnoyers was traded to Halifax in June as a follow-up to the Benoit-Olivier Groulx and Jared McIssac trade between the two teams. During the 2020-21 season, Desnoyers has six goals and six assists in eight games with the Mooseheads. He leads the team in scoring and ranks sixth in the league.

Desnoyers’ four-goal performance was the first one of 2020-21 in the QMJHL. He’s paired with Zachary L’Heureux, expected to be a top prospect in the 2021 NHL Entry Draft, so don’t expect this performance to be an anomaly. If he can significantly improve his production from his draft year, the Flyers will have earned value from a fifth-round pick. Desnoyers and the Mooseheads return to action on Thursday against the Wildcats.

Coyotes, Shane Doan have talks about potential return to organization
8 NHL RFAs who could be offer-sheet targets this off-season