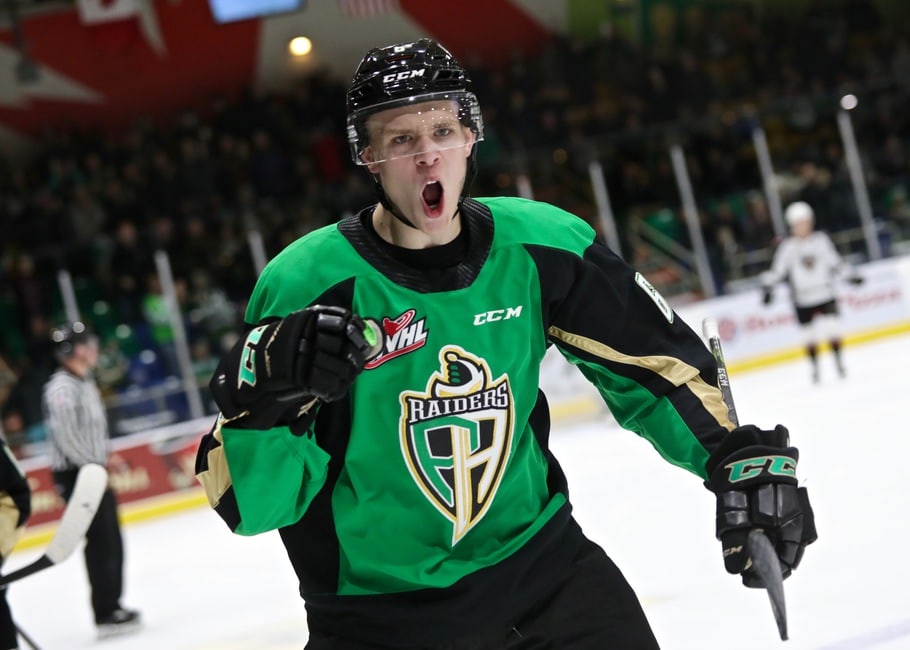 The Canadiens announced on Saturday that they’ve agreed to a standard three-year, entry-level contract for Kaiden Guhle. Drafted 16th overall in the 2020 NHL Entry Draft, Guhle spent the 2019-20 season in the Western Hockey League with the Prince Albert Raiders. The 6-foot-3 defenseman amassed 11 goals and 29 assists for 40 points in 64 games played. He won a silver medal with Canada at the Hlinka Gretzky Cup, in which he was held pointless in five games played.

THW’s own Matthew Zator had this to say about how Guhle fits into the Canadiens’ plans for the future.

The Canadiens continue to rebuild their defense with Guhle. They already traded for and subsequently signed Joel Edmundson and now have a two-way presence and character player in Guhle. Like I said earlier, he will be the most valuable player on the team one day. He won’t play right away, but he adds something they do not have in their pipeline right now, and that’s versatility and being hard to play against.

Guhle will return to the Raiders for the 2020-21 WHL season. The league recently announced that their season would begin Jan. 8, 2021. The Canadiens won’t rush his development, but with an aging core on defense, the hope is that he’ll be able to join top prospect Alexander Romanov on the backend as soon as possible.

With all the focus on 2023 NHL Entry Draft eligible Matvei Michkov, the other half of the race for the first overall pick, Connor Bedard, has made his debut in Sweden’s J20 Nationell for HV71. He was the first player granted exceptional player status in the WHL and the seventh in CHL history, joining John Tavares, Aaron Ekblad, Connor McDavid, Sean Day, Shane Wright, and Joe Veleno. Bedard put up a ridiculous 43 goals and 41 assists for 84 points in 36 games played for West Van Academy Prep during the 2019-20 season.

He was subsequently drafted first overall by the Regina Pats in the WHL Bantam Draft. The Pats approved his move, and it’s treated as a loan until the WHL season begins. He has trained with the team for the last few months and finally made his debut on Wednesday. He finished pointless but produced some impressive plays, including this demonstration of exceptional puck control and skating ability below.

It’s worth noting that as a 2023 draft-eligible, Bedard is still only 15-years old and won’t turn 16 until July of 2021. Meanwhile, 15-year old Russian phenom Matvei Michkov is third in scoring in Russia’s MHL. He has 14 goals and seven assists for 21 points in 19 games played. The race for first overall is on, and the good news is we have three more years of highlights from both of them until it’s decided.

The Jets have loaned former first-round pick Kristian Vesalainen to HPK in the Finnish Liiga. Drafted 24th overall in the 2017 NHL Entry Draft, he spent the entire 2019-20 season in the American Hockey League (AHL) with the Manitoba Moose. He amassed 12 goals and 18 assists for 30 points in 60 games played. It was a disappointing year for Vesalainen. After featuring in five games with the Jets during the 2018-19 NHL season, he was unable to crack a deep forward lineup this past season. In fact, he split his 2018-19 season between the NHL, AHL, and KHL.

Vesalainen should have fond memories of HPK after winning an SM-liiga Championship during the 2017-18 season. He amassed 19 goals and 20 assists for 39 points in 44 games played that season. He finished second in scoring and first in goals scored among his teammates. With the start of the 2020-21 NHL and AHL seasons still undetermined, it’s not surprising that Winnipeg found somewhere for him to play in the meantime. The expectation is he’ll return to the Jets once training camps open for the 2020-21 NHL season.