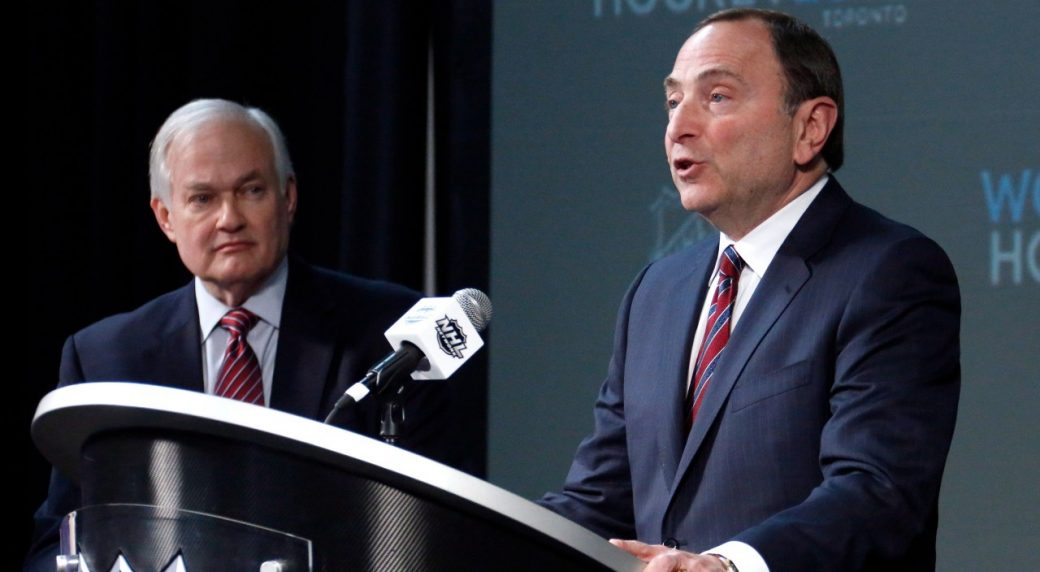 According to Gary Bettman, there’s been no ultimatum.

In fact, the NHL commissioner says it’s not even fair to characterize his recent discussions with the NHL Players’ Association as a renegotiation of July’s labour agreement because so much of the landscape has changed.

There will need to be a complete realignment for the 2020-21 NHL season to be played, including the creation of an all-Canadian Division. The sides will have to agree on a modified schedule, and another batch of health and safety protocols, and determine whether games are played in each team’s arena or regional hubs.

“We’re not actually having negotiations and we’re not seeking to renegotiate,” Bettman said Wednesday during an appearance at the Sports Business Journal’s ‘Dealmakers in Sports’ conference. “We made a number of assumptions collectively over the summer, most of which are not applicable anymore. There are a lot of things that we have to deal with if we’re going to return to play.”

And, yes, those could even include financial considerations if they go ahead with a season that might not even see a single ticket sold. The players clearly prefer the terms included in the July 10 Memorandum of Understanding — which called for them to lose 20 per cent of their paycheques to escrow in 2020-21, with another 10 per cent deferred — but Bettman indicated that two recent proposals tabled on behalf of the owners calling for increased deferral and escrow payments were made in an effort to keep everything in balance during a tough year.

“Under our [collective bargaining] deal, and the one we’ve had for more than a decade with the players’ association, whatever the revenues are the players only get 50 per cent,” said Bettman. “And if we overpay them and they don’t pay us back in the short term, they have to pay us back over time. There will be stresses on the system and we’ve had discussions about what those stresses are and how they might be dealt with, but we’re not trying to say ‘You must do X, Y and Z.’ We’re trying to look for ways to continue to work together.

“I know it’s being portrayed as something else and it’s unfortunate and it’s inaccurate because at the end of day if the system gets stressed it’s going to be stressed for both of us.”

Part of that characterization stems from the chilly reception those offers got from the NHLPA’s executive board last month. They put an abrupt halt to financial discussions with the league for more than a week.

The league submitted two proposals in mid-November. The first asked for changes solely to the upcoming season. Deferred compensation went to 20 per cent; escrow to 25. There were no other alterations.

The second asked for deferred compensation to be raised to 26 per cent for next season. Escrow was not touched until years four-to-six of the CBA, rising from six per cent to between 8.5 and nine.

The issue boils down to who gets paid what and when and, for the players at least, there is a question of principle here because they believe those matters were settled in July. The CBA extension contemplated the players accumulating debt to the owners against their 50-50 share to the point that it calls for an extra year to be tacked on if that debt falls between $125 and $250 million after 2024-25.

So far, the players haven’t shown much willingness to alter the existing agreement.

“If we have to pay out lots of cash — two-thirds of which is going to come back to us — that may cause some stress but we can, or we’ll have to, deal with it if we’re going to move forward,” said Bettman. “And by the same token if the players owe us more money than anybody imagined, the salary cap could well be flat or close to flat for the next five or six years and players into the future will be repaying what we’re owed. So the question isn’t, like, ‘Woah, we demand a renegotiation.’

“To the contrary, it’s ‘we see the way the system’s going to be impacted is it something that makes sense to deal with in the context of everything else that we may have to do, which is out of the ordinary and unanticipated in order to be in a position to possibly play?”

Bettman continues to target Jan. 1 as a start to the regular season even as a number of team sources have been questioning how that would be logistically possible. During his Wednesday chat, he noted that the league’s willingness to put off naming hosts for the return-to-play bubbles in the summer eventually led them to the safety of Edmonton and Toronto, which was an abrupt turn from an earlier plan (which was going to see Vegas and Vancouver host the games).

The NHL is willing to condense training camps, according to Bettman, and will likely have teams play just one or two exhibition games. But the start day for the regular season also hinges heavily on the spread of COVID-19 and regional health restrictions.

“That is a work in progress influenced largely by what we’re hearing from the medical experts and we talk to some pretty highly placed people without name-dropping,” said Bettman. “Covid is going through a second wave, which could be worse than the first wave and between [U.S.] Thanksgiving and the aftermath and what they think is going to happen for Christmas and the aftermath, we are taking our time and making sure that as we look for ways to move forward we’re focused on health and safety and doing the right things.”

The success of the playoffs was built on a spirit of cooperation between the NHL and NHLPA, not to mention the buy-in of players inside the bubble. There wasn’t a confirmed positive test among the more than 33,000 administered over two months.

That’s what makes this maneuvering towards the 2020-21 season so interesting. There doesn’t seem to be quite the same level of goodwill. Bettman was measured during his 20-minute appearance with the Sports Business Journal, but still seemed to hint at the fact the NHL maintained its rights in the MOU to use SPC Paragraph 17 — which is the so-called force majeure clause covering cessation of a season.

“We have been absolutely unequivocal with the players that we’re not attempting to renegotiate, OK?” said Bettman. “And by the way, there are letters in the agreement which we don’t have to get into, that were put in for our benefit in the event things got out of control as well. And so we each have rights which we could adhere to, but the fact is if I’m a player and I’m looking at a cap that’s going to be basically flat for the entire term of what is now a six-year collective bargaining agreement, and players for the next five or six years are going to be repaying what was overpaid, they have to ask themselves ‘does this make sense?’

“Just like there are a lot of issues we have to deal with, where we say ‘does this make sense?”’

The carrot dangling before everyone, according to the commissioner, is the belief that vaccines will allow the 2021-22 season to be played under normal conditions with full buildings. For the NHL, it would also come with the introduction of the Seattle Kraken and a new set of U.S. media rights deals — both of which should significantly boost league revenues.

First the owners and players just have to find a way to get through this nuclear winter.

“Everything you do in this type of situation needs to be a collaboration if it’s going to work,” said Bettman.

Label it as you will, but the collaboration remains very much a work in progress.