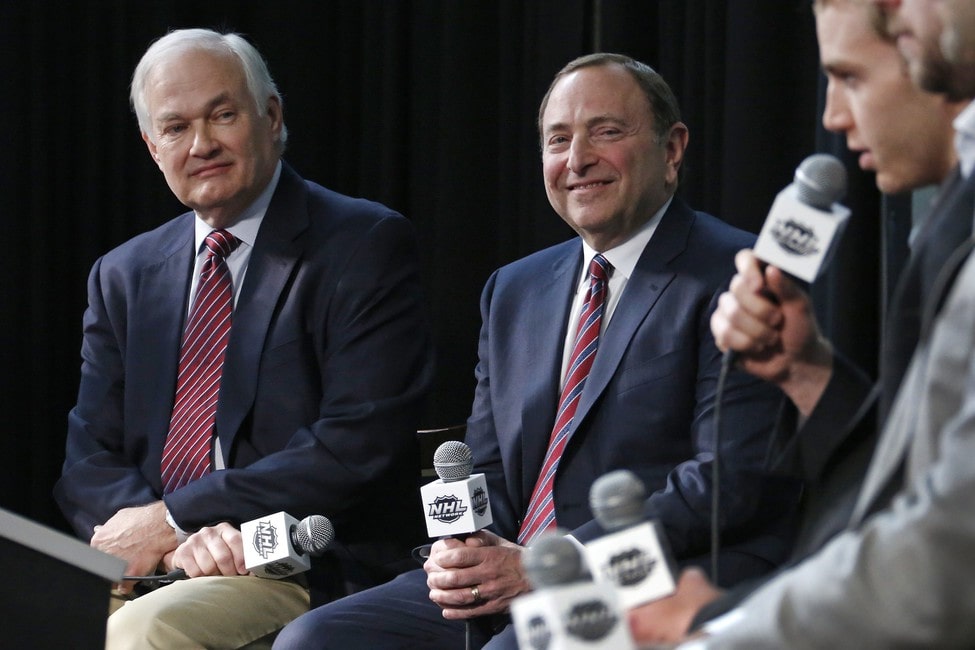 The National Hockey League, like other professional sports leagues around the world, took a major revenue hit due to the COVID-19 outbreak. This year, in a shortened 56-game season with limited or no fan attendance, the NHL has instituted never-before-seen division and helmet sponsorships to help fill the financial void. In this article, I’ll be detailing what new advertisements NHL fans can expect to see come Jan. 13.

For the first time in league history, the NHL has sold division naming rights to corporate sponsors. While the league has been realigned into four new divisions to minimize team travel for the foreseeable future, the opportunity to capitalize on the newly constructed division names is believed to be for the current season only.

The decision to sell division naming rights came not long after the NHL announced that small advertisements would be sold on player helmets — another unprecedented move to help the league recoup lost revenue.

Just like the sponsoring of division titles, the selling of ad space on player helmets is a first for the NHL. According to a report from TSN’s Rick Westhead, the NHL hopes to raise $15 million selling ads on helmets this season.

Unsurprisingly, some NHL teams are able to fetch more than others for helmet ads. Westhead went on to say that richer clubs such as the Toronto Maple Leafs and Montreal Canadiens will draw $1 million deals, while smaller market teams would compel much less. Although it’s still unknown the exact logistics from deals made thus far, over half the league has already unveiled who their helmet sponsors will be.

Here is a list of teams who’ve announced or displayed their helmet sponsors during training camp:

On Jan. 4, 2021, the Arizona Coyotes announced that they would be wearing two different advertiser’s logos on their helmets. For home games the team will dawn a Mountain America logo and for road games it will be that of Dignity Health.

On Jan. 6, 2021, the Boston Bruins announced that they would wear the logo of their arena naming rights holder, TD Bank. They will display the green and white TD Bank logo on both their home black and road white helmets throughout the season.

TD Bank is an American national bank and subsidiary of the Canadian multinational Toronto-Dominion bank.

The Calgary Flames announced that they would be wearing the logo of Scotiabank on their red home and white road helmets in 2020-21.

Scotiabank is a Canadian multinational bank/financial services company and also the naming rights holder of the Flames’ home arena, the Scotiabank Saddledome.

On Jan. 4, 2021, the Columbus Blue Jackets announced that they would be wearing the logos of Nationwide (road) and OhioHealth (home) helmets this upcoming season.

Nationwide is a premier car insurance company, while OhioHealth is a not-for-profit healthcare provider in Central Ohio.

The Detroit Red Wings announced on Jan. 4, 2021, that they will be wearing the initials of United Wholesale Mortgage on both their home and road helmets. Unlike other teams, this deal also included an on-ice logo for Red Wings home games at Little Caesars Arena, ads on the boards and within the penalty box, digital branding throughout the arena and concourse, and the naming rights to the parking garage located at 128 W. Fisher Service Drive.

United Wholesale Mortgage is a premier wholesale lender in the United States and is based out of Detroit, Michigan.

Although the team has yet to release a statement, the Oilers have been wearing the Rogers logo on their helmets during training camp. Rogers also owns the naming rights to their home arena, Rogers Place.

On Dec. 23, 2020, the Florida Panthers announced that they will wear two different helmet sponsors for the season. During gameplay, the team will wear the Ford Motor Company logo on their helmets, while during practice the team will dawn the logo of Baptist Health.

The Canadiens announced on Dec. 23, 2020, that they would wear the logo of their arena naming rights holder, Bell, for both their home and road games this season.

Bell is a Canadian telecommunications company headquartered in Montreal, Quebec.

As one of the first teams to make their sponsorship public, the Nashville Predators announced Bridgestone, their arena naming rights holder, would be the teams helmet sponsor for this upcoming season on Dec. 22, 2020. The Preds will wear the company’s logo featuring a red and black “B” on the side of their home and road helmets.

Bridgestone Corporation is a Japanese multinational auto and trucks parts manufacturer and also the Official Tire of the NHL.

On Dec. 22, 2020, the New Jersey Devils became the first team to announce their helmet advertisement when they said that Prudential logos would be placed on both their home and road helmets this season.

Prudential Financial is a New Jersey-based, American Fortune 500 company whose subsidiaries provide insurance, investment management, and other financial products/services to both retail and institutional customers.

While the Rangers have yet to announce their official helmet sponsor for the upcoming season, the team had announced that Northwell Health would be their “training camp” sponsor. Time will tell who the Rangers decide to go with for the Jan. 13 start date.

The Pittsburgh Penguins announced that they will be dawning a blue and white PPG Paints logo on their home and road helmets for the 2020-21 season. Like many other helmet deals, PPG Paints is also the naming rights holder of the team’s barn, PPG Paints Arena.

PPG Paints is headquartered out of Pittsburgh, Pennsylvania, and is a global supplier of paints, coatings, and specialty materials.

The Blues announced on Jan. 7, 2021, that they will be wearing two different advertisers for the upcoming season — Stifel for home games and Enterprise for road games.

Stifel is a St. Louis-based investment bank and financial services company, while Enterprise is an American car rental company headquartered out of St. Louis, and also the team’s arena naming rights holder.

The Toronto Maple Leafs will wear the Scotiabank logo (along with the Flames) on their helmets for 2020-21. The team will wear a white “S” logo on home helmets and a red “S” logo on their road helmets.

Scotiabank is a Canadian multinational bank/financial services company and also the naming rights holder of the Maple Leafs’ home arena, the Scotiabank Arena.

The Washington Capitals will dawn the logo of their arena naming rights holder CapitalOne on their helmets this year, the team announced on Dec. 22, 2020. Unlike other deals, the Capitals deal is interesting in the fact that their sponsor’s name is akin to the teams’.

While the team has yet to officially announce their helmet sponsor, the Winnipeg Jets have been wearing the Bell logo during training camp.

If the pandemic has made anything clear, it’s that the bottom line matters. In a recent publication from Forbes, it was announced that the average value of NHL franchises declined last year for the first time since 2001. While the further commercialization of the league seems inevitable, many do not want to see the NHL break tradition and follow European hockey’s smothering of advertisements on player jerseys and team gear.

Although new advertising efforts are not welcomed by all hockey fans, the NHL should be commended for continuing to find new and creative ways to keep their players paid and employees employed. The simple fact that the NHL has resorted to helmet and division sponsorships underscores just how dire the situation really is for the league, but how far are Gary Bettman and company willing to go?