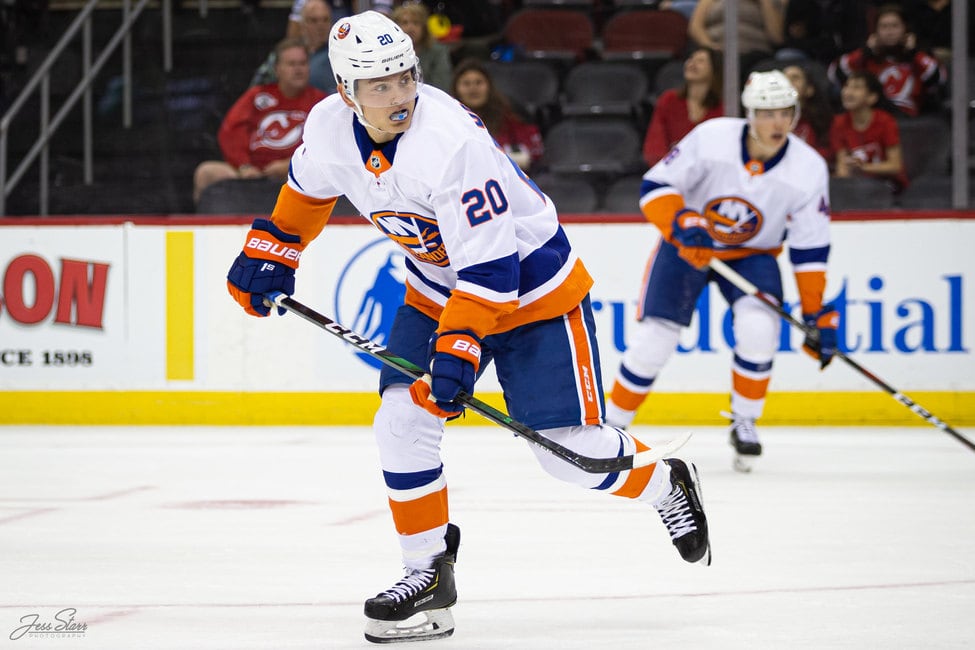 “They look different this year than last year — they’ve closed the gap immensely,” Barry Trotz said. “They’re putting pressure on the veteran guys and they’re putting pressure on the coaching staff to include them. Last year, they looked like boys playing with men. Now, they look like men.” (from ‘Islanders notebook: Mathew Barzal dilemma, young forwards earning praise,’ The Athletic, 01/08/2021).

Ilya Sorokin is also at camp, but we already know he is part of the goaltending tandem going into the 2020-21 season with Semyon Varlamov.

Due to the shortened season, training camp is also short, and there are no exhibition games. Trotz got creative and put the prospects up against the Isles’ established players in intrasquad scrimmages, and was impressed with the results.

The Islanders 2018 first-round draft pick (11th overall) is making a case for himself to be in the opening night lineup.

“Ollie’s looked really good in camp,” Trotz said. “That goal he scored, it was on his stick and gone in a heartbeat.” Goal scoring is just what the Islanders are looking for this season. General manager, Lou Lamoriello, had been seeking a top-six goal scorer, but due to cap restrictions, had difficulty making it work under the flat cap.

However, a goal scorer coming through their own pipeline would be a welcomed addition. Wahlstrom has been skating on a line with J.G. Pageau, and Bellows who is also trying to earn a roster spot. The Yarmouth, Maine, native spent his offseason in Sweden’s second-highest professional league, playing for the AIK hockey club. He accrued four goals and four assists in 10 games played.

His NHL ready shot would be a boost to the Islanders offense who are in need of a pure goal scorer. Look for Wahlstrom to try and break through at the NHL level.

“They’re definitely two really smart players,” Pageau said of Wahlstrom and Bellows. “They have a really good skill set. It’s hard to tell who I’m going to start with. I’ve been on a different line every day, even when Barzal came back… [Wahlstrom and Bellows] have done really good to adapt… Every player is pushing to be in the lineup and that’s a good thing.”

Bellows is an interesting case due to the fact that he was caught using performance-enhancing drugs when play resumed after the NHL pause. Seemingly, he’s doing his best to erase that from everyone’s memory with a strong showing in camp.

The only certainty on the third line is Pageau. Dal Colle and Leo Komarov are the usual suspects the kids will need to beat in order to be in the lineup Thursday night, and both Wahlstrom and Bellows are not making Trotz’s decision easy.

Now, Noah Dobson is not technically a rookie, but after an awkward transition year where he was mostly watching from the press box, he’s drawing high praise as he gears up for his first full-time NHL season.

After Lamoriello was forced to move Devon Toews to Colorado, and Johnny Boychuk was forced to end his career due to injury, it’s Dobson’s time to step up on the blue line.

“He’s obviously a really talented player,” Adam Pelech said. (from ‘Islanders’ Noah Dobson to have bigger role this season,’ New York Post, 01/05/2021) “We all knew that since he was drafted here and we’ve seen him in training camp. He didn’t play as much as I’m sure he would’ve liked to last season but I think that he still developed a ton. We’re all really looking forward to seeing his game continue to develop and we all think he can be a great player in this league.”

Dobson has been getting reps in with the first power-play unit along-side Ryan Pulock. “I think he’s going to do an exceptional job up there,” coach Trotz said of Dobson. (from ‘Islanders show they are giving Noah Dobson a significantly expanded role,’ Newsday, 01/08/2021).

With Toews and Boychuk now out of the equation, it’s next man up for the Islanders, and Dobson is already solidified in the top-six defenseman.

It’s unlikely that Bode Wilde makes the opening night roster, but he sure has made an impression at camp.

Coach Trotz claimed he’s in the mix to claim a seventh defenseman role, or possibly hitch a ride with the taxi squad. However, it might be more useful to have him get everyday reps in when the AHL season starts in February.

Regardless, after a year plagued by injuries, and then cut short due to the pandemic, it’s a welcomed development that another youngster is progressing well in the Islanders pipeline.

Joe Pantorno of amNewYork joined The Hockey Writers’ Nassaumen Hockey Podcast, and had this to say about Wilde:

Teams are still trying to figure out their cap situations, and waivers are certainly a factor. With guys like Bellows and Wahlstrom not requiring waivers, it’s entirely possible that the kids don’t make the cut for opening night. However, they’re making that decision harder every day with a strong showing and possibly forcing coach Trotz’ hand.