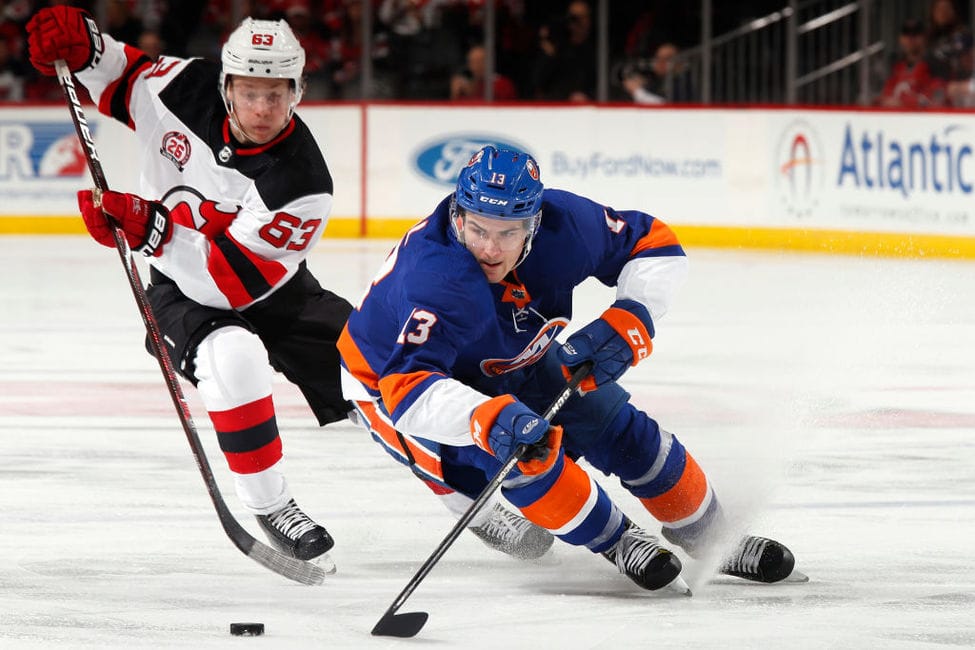 The ’12 Days of Christmas’ is a classic holiday song first published in its current form in 1908. In a nod to the classic carol, join The Hockey Writers as we count down the 12 Days of Hockeymas. Each day, we will provide you with a piece of hockey history as we eagerly await the start of the 2020-21 NHL season. Today, we look at the Islanders’ best player, Mathew Barzal, and the top nine plays of his career so far.

Hockey fans of all ages have tried this everywhere, from their driveway to their local beer league warmup. Our minds quickly turn to Nov. 2005 when Marik Malek scored the between the legs goal in the 15th round of a shootout to win a game. We dream of having the wherewithal to pull it off in just the right moment (bonus points if someone films it). Unfortunately, many of us don’t have the skill nor the opportunity to make this move happen. Barzal, on the other hand, doesn’t have that problem.

Following a waved off goal a minute and a half earlier on the same power play, Barzal has an opportunity of a lifetime. After collecting a rebound off the end boards, he creates space for himself by shifting to his left and goes between his legs with his stick to fire it home and tie the game late in the third period.

Not many players possess both the ability to make high-level plays, the creativeness, and the guts to pull them out during competition.

To close off an amazing 3-0 comeback against the Philadelphia Flyers, Barzal freezes goaltender Carter Hart with an “around the world” move before firing the puck five-hole.

When you think of Barzal, you think of break-neck speeds, and that’s just what he did on this breakaway goal against the New Jersey Devils. After a neutral zone turnover, he picks up the puck, turns the other way, and puts on the jets.

After Long Island native Keith Kinkaid stops the initial shot, Barzal picks up his own rebound and wins the game in overtime.

In a playoff rematch 33 years in the making, the Islanders kept it interesting during the 2020 Stanley Cup playoffs against the Flyers. Late in the second period, Barzal picked up the puck after a forced turnover by Derick Brassard, wheeled around the circle, and picked a corner on Hart to put the Islanders up 4-3.

They would give up the lead and eventually lose the game in overtime but found a way to win Game Seven to advance to the Eastern Conference Finals for the first time since 1993.

One of the best parts of watching Barzal play is his ability to make a play out of nothing. With almost no room to work with, he takes a pass from John Tavares, uses his speed to get past Anton Stralman, and quickly moves towards the net to fire home a backhand past Andrei Vasilevskiy.

This was a disappointing game and season overall in 2017-18 for the Islanders, but this goal was something positive for fans to remember.

They say patience is a virtue, and that couldn’t be more of the truth than on this play by Barzal. After passing the puck back up top during a power play against the Florida Panthers, he finds open space on the backdoor to set up shop. The puck seems to find talented players, and it did here.

Barzal picked up a pass from Brock Nelson and out-waited Aaron Ekblad and Sergei Bobrovsky long enough to lift the puck off of his backhand and into the empty net.

In the second most anticipated game that season — the other being John Tavares’ return to Long Island — the Islanders visited the Toronto Maple Leafs just before New Year’s 2018. Barzal, the next leader on the Islanders in terms of skill, took it upon himself to show Tavares that Long Island would be fine without him.

Not only did Barzal score a natural hat trick, but he also led the Islanders to a 4-0 win.

Everyone loves a nice trick play, but Barzal may be one of the few players in the league who can complete this. Adam Pelech collects the puck in the high slot, picks his head up, and sends an alley-oop for Barzal to find in the neutral zone.

After picking up speed, he’s in all alone and makes no mistake.

A kid who seems to find his way into big moments didn’t disappoint fans on this occasion. After a slick pass from Jordan Eberle, Barzal finds himself all alone in overtime. With a chance to go up 3-0 in the first round of the 2020 Stanley Cup playoffs, Barzal pulls the puck across the crease to his backhand to slide home the game-winner.

“I run that play a little bit in practice, even in games, just try to sneak behind the defense a little bit,” Barzal said in an interview. “[You have] to time it perfectly just on the blue line. Great heads-up play by [Eberle], great touch on the pass. I’ve had that play a few times this year and I’ve looked five-hole, looked short side. I decided to take this one far post and it paid off.”

Just three seasons into his career, Barzal is a bonafide all-star and clearly the centerpiece to an Islanders team on the rise. When he’s going, the team follows. Can you think of other amazing Barzal plays?