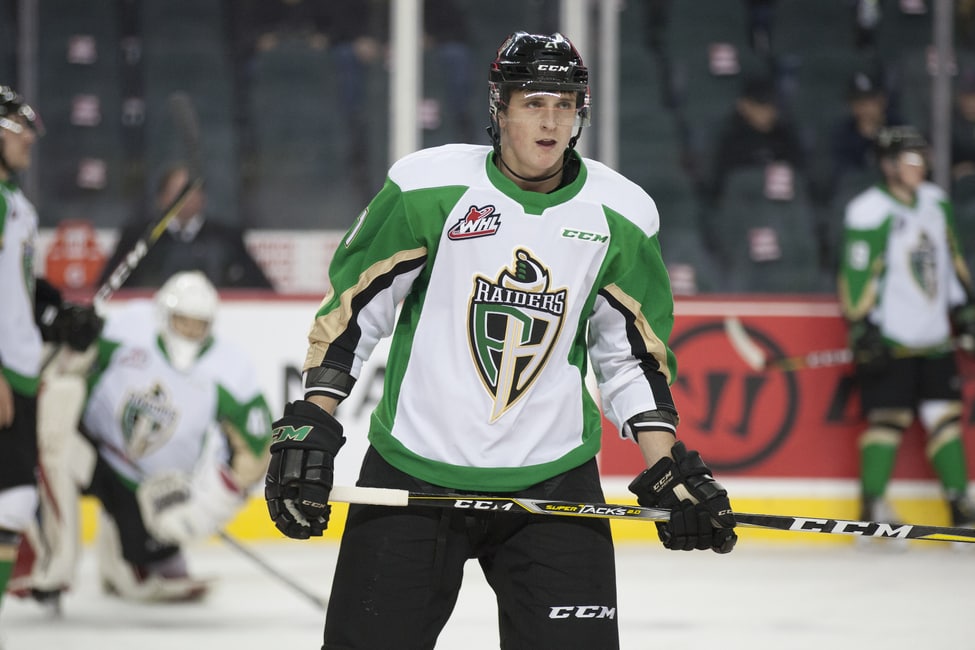 Since being taken with the 91st-overall pick in the 2019 NHL Entry Draft, 6-foot-6 Belarussian centerman Aliaksei Protas is an early front runner for the biggest steal of this draft class. Having finished ninth in WHL scoring last season, “The Viper” has continued turning heads as a 19-year-old playing for the KHL’s Dinamo Minsk. With his combination of size, speed, and skill, it seems as though the Washington Capitals have found yet another diamond in the rough with the drafting of Protas.

In this article, I will detail Protas’ junior career with the Prince Albert Raiders, his recent play with the Dinamo Minsk, and what the Capitals can expect from him moving forward.

Born on January 6, 2001, in Vitebsk, Belarus, Protas began his junior career as the Prince Albert Raiders’ 26th pick in the 2018 CHL Import Draft. Originally listed as 6-foot-3 and 179 pounds, Protas has since grown to a whopping 6-foot-6 and 210 pounds.

In his first year with the Raiders, Protas put up respectable regular-season numbers, notching 11 goals and 29 assists in 61 games. While these weren’t necessarily noteworthy stats heading into the draft, it was his playoff performance that set him apart from the pack. He racked up 22 points (12 goals, 10 assists) in 23 playoff games to help the Raiders become WHL Champions for the second time in franchise history, and put his name on the radar of NHL scouts ahead of the 2019 Entry Draft.

The young behemoth’s first season in the WHL made quite the impression on Brian MacLellan and the Caps, as they traded the 118th and 129th picks to the New Jersey Devils for the rights to select Protas at 91.

‘The Viper’ will be a nickname that Caps fans, like Protas, will learn to love. Following the 2019 Entry Draft, Protas’ head coach Marc Habschieid offered some insight on how the nickname came about during Aliaksei’s first season with the Raiders.

“It’s a Don Cherry night where we had to wear Don Cherry themed jerseys,” Habscheid said. “Part of the thing was to put your nickname on the back. He didn’t really have one, we just called him ‘Alex.’ But his [hockey] billet just decided to put ‘Viper’ on there. He was like ‘what is Viper?’ He didn’t know, but he was such a good sport about it. Just a good guy.”

The potential that the Capitals saw in ‘The Viper’ was confirmed and then some during the 2019-20 season, which saw him explode for 31 goals and 49 assists in 58 games as an alternate captain with the Raiders. Protas ranked ninth in WHL scoring and was ranked first amongst European-born players, not to mention he led the Raiders in both goals and assists. His breakout season earned him a spot on the 2019-20 Eastern Conference’s First All-Star Team and also the Eastern Conference’s Most Sportsmanlike Player of the Year award, having registered only eight penalty minutes all season.

With COVID-19 complicating the start of the 2020-21 NHL and WHL seasons, Aliaksei has since been loaned to the KHL’s Dinamo Minsk, where he seems to have picked up right where he left off.

While he wasn’t brought on to put up the prolific numbers he did for the Raiders, Protas has performed well for the Dinamo, scoring four goals in his first 18 games – placing him amongst the top scorers in the KHL for those under the age of 20.

The Capitals loaning of Protas to the KHL for the 2020-21 season was a smart play on behalf of McLellan and company, as he has continued his development in a men’s league against some of the best players outside of the NHL.

With the future of the WHL and NHL seasons still in doubt, Protas is likely to continue his play in the KHL for the foreseeable future, pending the commencement of the WHL’s 2020-21 season and/or Capitals’ training camp.

What the Capitals Can Expect

With depth at the center position being vital for the Capitals, the drafting of young studs like Connor McMichael, Hendrix Lapierre and Protas sets the team up nicely moving forward. As Nicklas Backstrom, Evgeny Kuznetzov and Lars Eller will carry the load for right now, players like Protas will likely have to wait their turn before seeing big minutes with the club.

How long Protas will have to wait remains to be seen, although his recent play in the WHL and KHL has certainly grabbed the attention of Capitals’ management, who won’t hesitate to give Protas a shot once he is ready for it.

All things considered, had the draft been redone, there is no way that Protas is still available at the end of the third round.