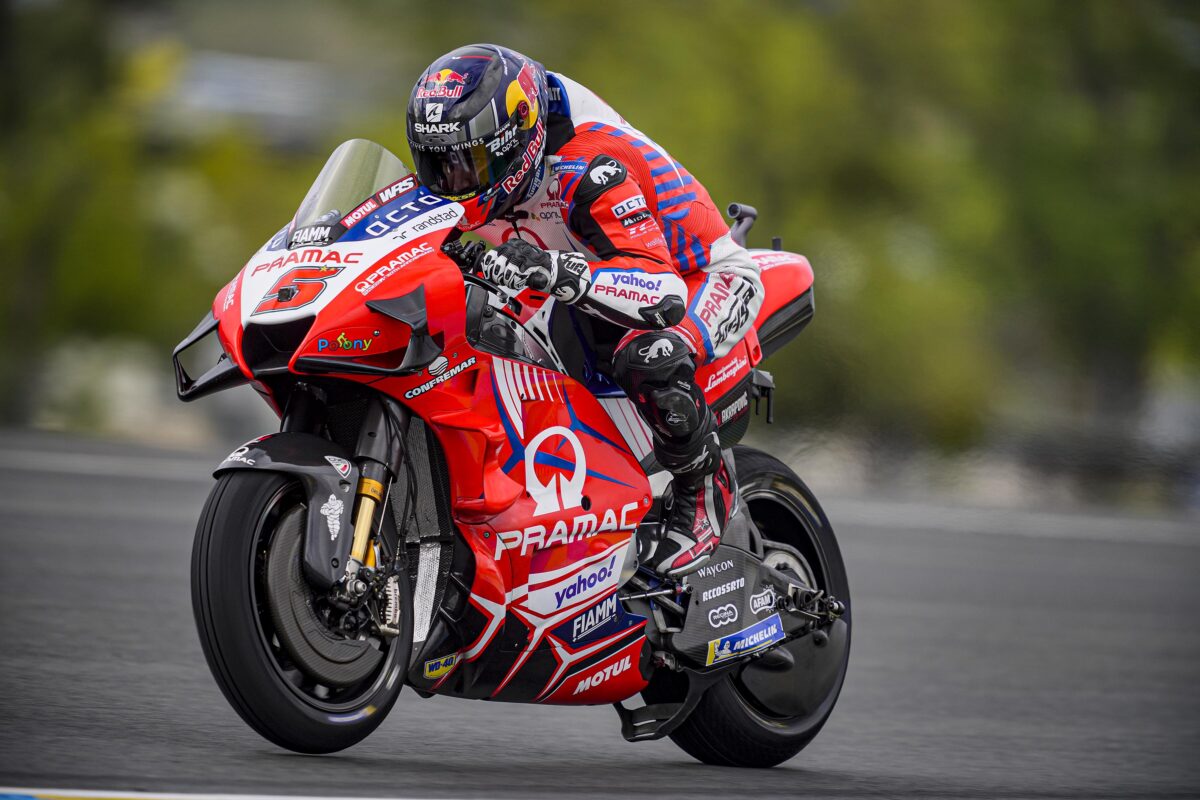 Johann Zarco led the way at the end of the opening day of running for the French Grand Prix at Le Mans after managing the quickest time in FP2.

The home hero continued his strong form at Le Mans whatever the weather after ending the opening practice session second as the fastest man on wet tyres, Zarco firing in a late FP2 gambit to head compatriot Fabio Quartararo at the head of the timesheets.

The Le Mans track surface was bone dry following Friday morning’s damp opening test, thus allowing all riders to venture out on slicks early on to improve their FP1 times.

With rain expected throughout the entirety of Saturday, FP2 could very well be the deciding session that sorts the pilots that will progress directly to the pole shootout and those that will have to contest Q1.

Quartararo looked to be on dominant form in the dry after only managing the 16th best time in the morning, the Yamaha ace lapping over half-a-second quicker than Takaaki Nakagami following the opening sequence of runs.

He managed to lower his benchmark to a 1:31.842s as the session raced towards its climax and the field headed out for a final –potentially crucial-time attack, though he aborted his final effort after looking good to improve once again.

This left the door wide open for Zarco who popped in a 1:31.747s to take over at the top of the timing pylon, an effort that would not be superseded as his competitors completed their final runs.

Quartararo held onto second ahead of team-mate Maverick Vinales, while Honda’s Pol Espargaro was a strong fourth ahead of Franco Morbidelli’s Petronas SRT-run M1.

KTM’s Miguel Oliviera impressed on his way to sixth overall after the RC16’s looked to be in for another tough weekend around famous curves of Le Mans, while FP1 leader Jack Miller bagged the seventh best time.

Marc Marquez was eighth overall ahead of Valentino Rossi who looked to try and put his dreadful start to 2021 behind him with a decent run to ninth and a provisional passage to the pole shootout, while Nakagami completed the top ten.

Both Suzuki’s ended up missing out after both Alex Rins and Joan Mir crashed out in the dying moments of the session, the former completing the test 11th with the latter down in 13th-the pair sandwiching points leader Francesco Bagnaia in 12th.

Aprilia look to be struggling early on in France with Aleix Espargaro able to manage only the 14th best time after crashing twice at Turn 3 throughout FP3, team-mate Lorenzo Savadori a lowly 20th after lapping sixth quickest this morning.

Turn 3 turned out to be a hot-spot for crashes during FP2 thanks in part to lower track temperatures, the bend also catching out title contenders Quartararo and Bagnaia during the session, while it was also the site of Rins’ late get-off.

Miller and Mir managed to at least survive the charms of Turn 3’s gravel trap, though instead fell victim to Turns 7 and 8 towards the latter stages of the test.