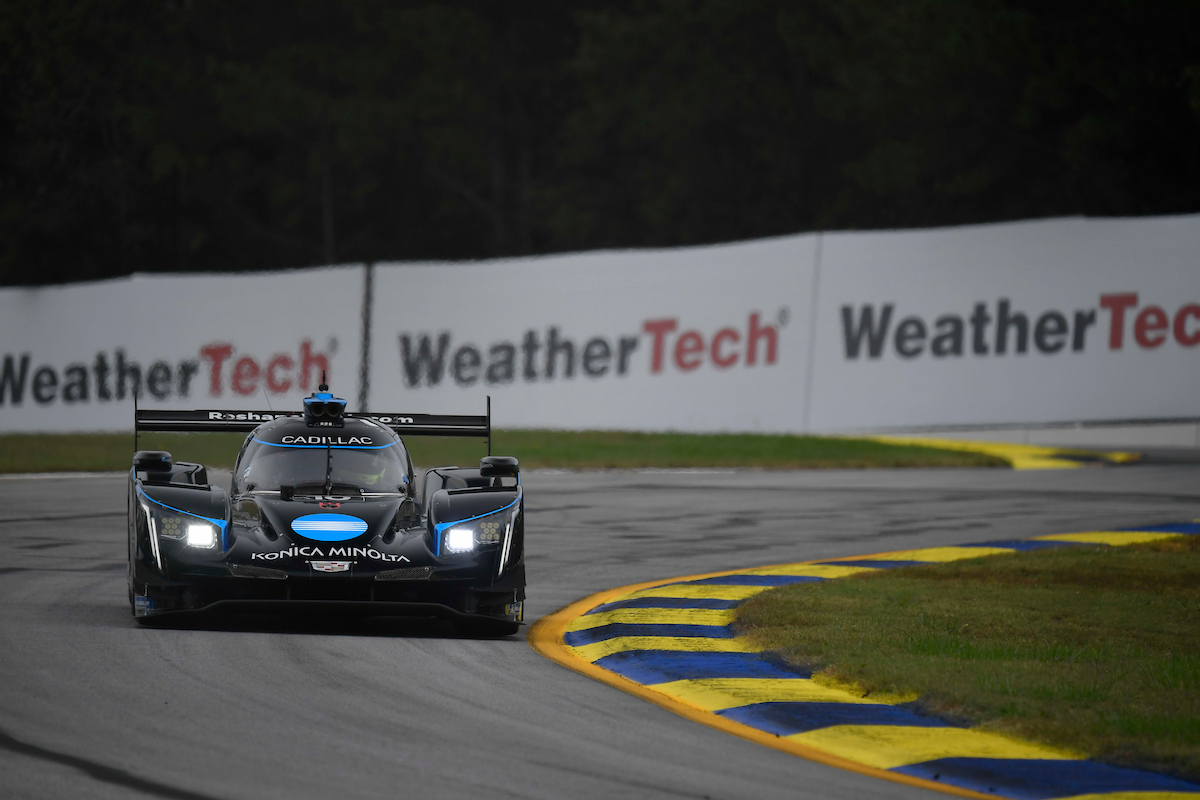 Renger van der Zande, Ryan Briscoe and Scott Dixon have secured victory in Motul Petit Le Mans after a dramatic finish in which Ricky Taylor and Pipo Derani ran each other off the track in the final fifteen minutes of the race.

Acura Team Penske was in control of the race after starting from pole position, with the #6 Acura ARX-05 of Dane Cameron, Juan Pablo Montoya and Simon Pagenaud leading for the majority of the opening hour, apart from a brief period in the lead for Nasr after four hours.

The #6 Acura and the front-running #77 Mazda RT24-P of Tristan Nunez, Oliver Jarvis and Olivier Pla then fell away in simultaneous incidents at the halfway point. After this, the lead battle effectively came down to the #31 Whelen Engineering Cadillac DPi-VR and the #7 Acura ARX-05 of Ricky Taylor, Helio Castroneves and Alexander Rossi.

The Acura led into the night until the eighth hour, until Nasr seized the lead on a pitstop cycle shortly before Rossi retook the lead, after which Derani took the red-and-white Cadillac over.

What followed was an exhilirating battle between Derani and Rossi, which saw the two drivers trade the lead back and forth until Derani decided the battle with a stunning dive down the inside into turn one, capturing the lead and seemingly holding on win. This all came to an end when Taylor attempted to dive down the inside of Derani at turn one, ending in contact and sending both cars spinning into the gravel.

Van der Zande, running third, was there to pick up the pieces and take the #10 Wayne Taylor Racing Cadillac to victory.

Tower Motorsport by Starworks have won the four-car battle in LMP2 after their main rival fell away with mechanical troubles. The #8 ORECA 07-Gibson of John Farano, Job van Uitert and Mikkel Jensen won the race after the #52 PR1/Mathiasen Motorsports ORECA 07-Gibson, which led the race for the vast majority, went behind the wall with a mechanical issue in the final hour.

Porsche have finally brought an end to their rotten 2020 streak with a GTLM class victory for Nick Tandy, Fred Makowiecki and Matt Campbell.

The fight for supremacy throughout the race was mostly between Corvette and BMW, with the pendulum seemingly swinging towards the #24 BMW M8 GTE of Jesse Krohn, John Edwards and Augusto Farfus. The black BMW seemed to be heading for a certain win until it fell apart in the final hour.

Farfus was pushed wide by a prototype on the main straight, forcing the Brazilian to pit and have grass removed to prevent overheating. This promoted the #911 Porsche 911 RSR-19, in the hands of Makowiecki, into the lead.

Porsche looked to even be headed for a double podium, until the #912 Porsche 911 RSR-19 crashed hard after the final restart with Laurens Vanthoor behind the wheel, forcing the race to end behind the safety car.

Antonio Garcia, Jordan Taylor and Nicky Catsburg finished second in the #3 Corvette C8.R, with Krohn, Edwards and Farfus moving back up to third after the second Porsche crashed. Tommy Milner, Oliver Gavin and Marcel Fässler finished fourth in the #4 Corvette C8.R.

The #25 BMW M8 GTE of Connor de Phillippi, Bruno Spengler and Colton Herta finished fifth and many laps down after spending time in the garage with mechanical troubles.

Scuderia Corsa seal it in GTD

Jeff Westphal, Alessandro Balzan and Cooper MacNeil have taken the GTD class victory in the #63 Scuderia Corsa Ferrari 488 GT3 Evo in a thrilling scrap that could realistically seen more than a handful of cars winning.

The Weathertech-liveried Ferrari ended up on top ahead of the #14 AIM Vasser Sullivan Lexus RC F GT3 of Jack Hawksworth, Aaron Telitz and Michael de Quesada, which led the race at various points. Andy Lally sealed third for GRT Magnus in the #44 Lamborghini Huracan GT3 Evo in the final hour for himself Andy Lally and Spencer Pumpelly.

The top five was completed by a pair of Porsches, with the #16 Wright Motorsports Porsche 911 GT3 R of Patrick Long, Ryan Hardwick and Jan Heyleny taking fourth ahead of the returning #6 Pfaff Porsche 911 GT3 R of Zacharie Robichon, Lars Kern and Dennis Olsen in fifth.

Championship leaders Meyer Shank Racing suffered a major blow to their title hopes following a collision with the Heart of Racing Aston Martin Vantage GT3, which damaged the suspension of the #86 Acura NSX GT3 Evo, leaving Mario Farnbacher, Matt McMurry and Shinya Michimi down tenth in class and dropping Farnbacher and McMurry to fourth in the championship with just two races remaining.