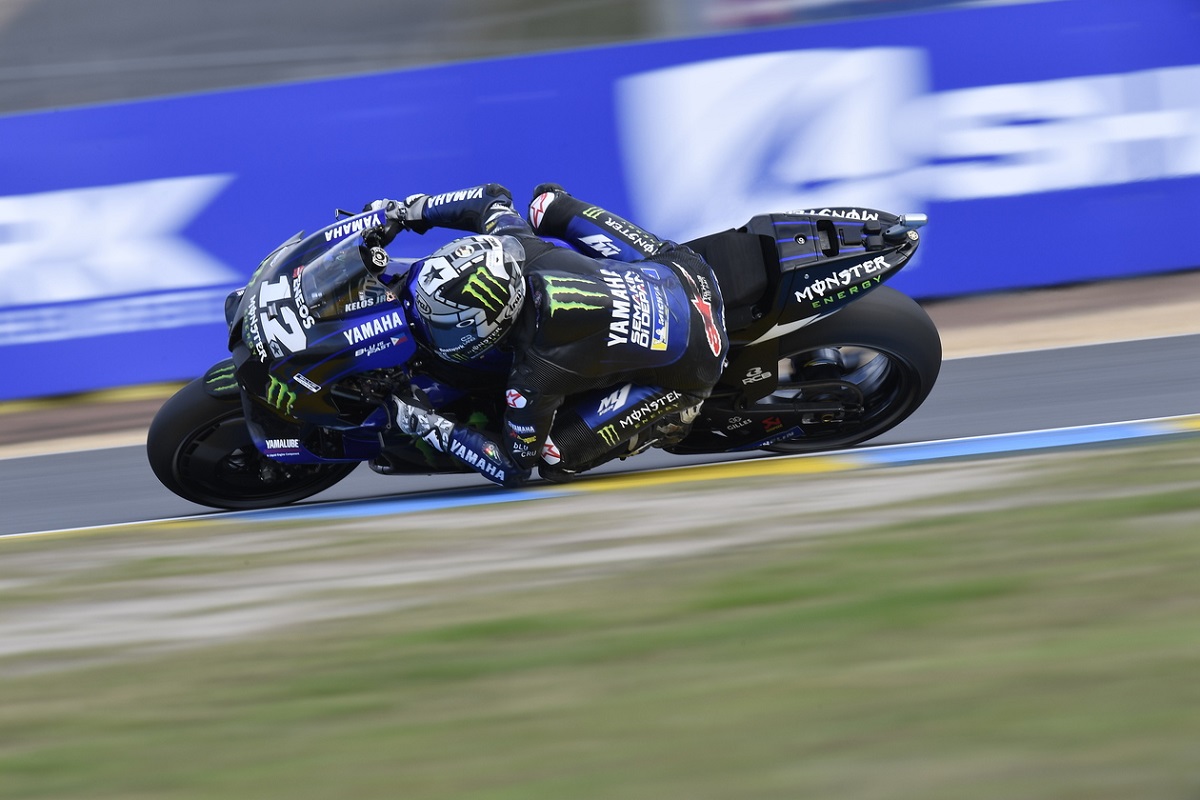 Maverick Vinales led the way for Yamaha in the opening practice session for the Aragon Grand Prix at a chilly Motorland Aragon circuit.

The Spaniard-as the lone factory M1 this weekend due to Valentino Rossi having to miss the event following after being diagnosed with Covid-19- fired to the head of the timesheets with a late flyer over half –a-second clear of anyone else at that point in the session, a time that would ultimately secure him top FP1 honours.

FP1 got underway half an hour behind schedule as a result of the freezing temperatures that coated the Aragon venue, with the track temperature being just 8 degrees celsius at the sessions expected start time.

Michelin’s MotoGP control tyre has a minimum working temperature of around 10-11 degrees, meaning a delay was necessary until the track warmed up.

Fellow Yamaha competitors Franco Morbidelli and Fabio Quartararo closed up to end the delayed session just 0.085 and 0.276 down on Vinales respectively, though both suffered late crashes that prevented any further improvement in the closing seconds.

Championship leader Quartararo went down early into Turn 8-also known as the Corkscrew-on his final push lap, his airbag deploying as he hit the ground hard.

Turns 2 and 14 meanwhile proved to be hotspots for several spills across the chilly session, Johann Zarco the first to fall foul of the conditions early on as he dropped his Avintia Ducati into the gravel as he turned into the down-hill Turn 14.

Morbidelli would follow as the session approached its climax, the Italian suffering an almost identical crash to Zarco.

Alex Marquez and Iker Lecuona meanwhile would also suffer similar incidents to one another at Turn 2 late on, the pair losing the fronts of their respective Honda and KTM machines as they made the transition from the left-hooker of Turn 1 into the sweeping second bend.

All four riders walked away from their spills unharmed.

Despite his crash, Marquez would post the fourth quickest effort for his factory Honda outfit ahead of LCR’s Takaaki Nakagami on his own RC213-V example.

Joan Mir was sixth fastest for Suzuki, while Pol Espargaro followed marginally behind on the highest-placed KTM.

Cal Crutchlow made it three Honda’s in the top ten by claiming the eighth best time, with the top ten being completed by the second GSX-RR Suzuki of Alex Rins and Aprilia’s Aleix Espargaro.

Andrea Dovizioso settled for 17th on the second factory Desmosedici, while Francesco Bagnaia rounded off the field in 21st position.