Vettel: F1 on the Nordschleife would be the ‘ultimate challenge’ 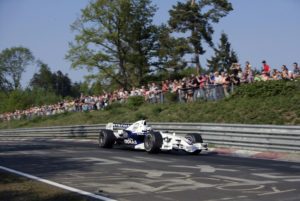 Four-time Formula 1 World Champion Sebastian Vettel believes the Nordschleife layout of the Nurburgring would provide the ultimate driving challenge for the championship.

The initial Gesamtstrecke (whole course) 187-turn behemoth was completed in 1927 before being reduced to the current 160-turn Nordschleife layout we know today in 1973 after the Sudschleife (south section) was removed.

F1 last raced on the Nordschliefe layout in 1976, the year in which Niki Lauda suffered a near-fatal accident at Bergwerk in his Ferrari 312T2.

The original start/finish straight was demolished in 1982/83 to make way for the new GP-Strecke layout that is now used for major circuit events.

“I had a scary moment after the Shwedenkruez corner, I had brakes fading and nearly crashed because I was treating the car like a sports car, which it was, but not made for the Nordschleife.

“It’s a very, very enjoyable track. I think it will be fantastic if we were to race on the Nordschleife.

“Obviously, the track would need a resurfacing and a bit more smooth but that would be the ultimate challenge. I think it’s the best track in the world. I followed the 24h race two weeks ago as well so generally a very big fan of the Nordschleife.”

“There was one part of the track I remember it was a little bit blind left uphill, in the corner really tightened. I was not prepared so I understeered off and went over the curb and cut across the grass. Fortunately I stayed out of the barriers, but that was my last experience!”