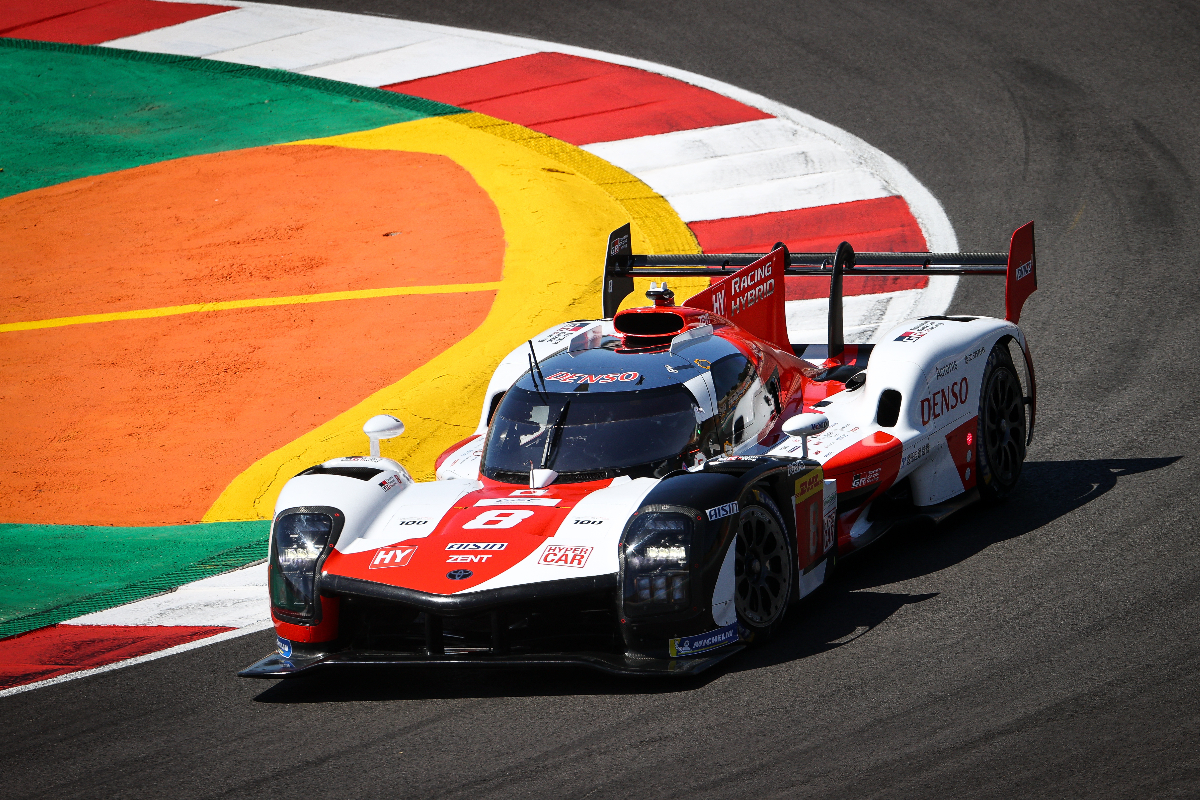 Toyota Gazoo Racing has taken a one-two victory in the Eight Hours of Portimao, fending off a challenge from Alpine to take their second win of the season in a race that saw team orders had the cars swap places twice in the final ten minutes.

The #36 Alpine A480-Gibson started from pole position and outpaced the pair of Toyotas for the first number of hours, but the two hybrid Toyotas gradually closed the gap throughout the race, as the two Japanese Hypercars had far superior fuel efficiency, sometimes going as much as seven laps longer per stint.

Eventually, the shorter stints for Alpine meant that the pair of Toyotas were able to reel in the Alpine in the second half of the race. Apart from a brief challenge from a very quick Nicolas Lapierre after a safety car restart, the two Toyotas had an unchallenged run to the chequered flag in the Portuguese heat.

To some surprise, Toyota then called team orders in the final fifteen minutes to order Sebastien Buemi to drop to second and let Jose Maria Lopez by into the lead of the race.

Buemi complied and let Lopez by, but a few laps later, the Swiss driver was able to retake the lead of the race again.

Glickenhaus had a difficult debut race in the FIA World Endurance Championship. The American privateer started in the middle of the LMP2 pack and spent the opening phase struggling to get by the LMP2 cars.

Their race then took a turn when Ryan Briscoe made contact with a pair of GTE Am cars into turn 5, forcing the #709 LMH into the garage and losing many laps as the car had to be repaired. The team managed to make it to the finish, but did so 53 laps down on the winning Toyota.

The two cars involved in that incident, the #77 Dempsey-Proton Porsche 911 RSR-19 and the #777 D’Station Racing Aston Martin Vantage AMR, both retired from the race as result of damage sustained in the incident.

LMP2 saw JOTA pull off a remarkable comeback to take a one-two victory following a lap one clash. Tom Blomqvist had started the #28 ORECA 07-Gibson on pole position, but was tagged and spun round by team-mate Antonio Felix da Costa in the #38 ORECA.

The #28 car dropped way down the order but gradually worked its way back up throughout the hours, until Stoffel Vandoorne managed to first move the car into 2nd after a fierce fight with Team WRT’s Charles Milesi and then jump United Autosports during a round of pitstops.

The two cars then engaged in a nailbiting fight for the win in the closing minutes, which ended with Da Costa elbowing his way past Blomqvist and take the lead. This enabled the Portuguese driver to take a home win, alongside Anthony Davidson and Roberto Gonzalez.

Blomqvist, Vandoorne and Sean Gelael had to settle for second place as a result.

Paul di Resta, Phil Hanson and Wayne Boyd completed the podium in the #22 United Autosports ORECA 07-Gibson, beating out the #31 Team WRT ORECA of Robin Frijns, Ferdinand Habsburg and Charles Milesi, which ran in podium contention throughout the race but just lost out at the end.

AF Corse took its first race of the season and the first win in GTE Pro since November 2019. The #51 Ferrari 488 GTE Evo of Alessandro Pier Guidi and James Calado started behind the polesitting #92 Porsche, but Calado moved into the lead in the second hour and never looked back.

The #52 Ferrari 488 GTE Evo of Daniel Serra and Miguel Molina made it a one-two for the Italian squad.

Third place went to the Estre, Neel Jani and Michael Christensen, while Gianmaria Bruni, Richard Lietz and Fred Makowiecki completed the class in the #91 Porsche 911 RSR-19.

The Italian squad moved its way out front after the first and only safety car of the race, but were briefly dropped back to second as the #56 Team Project 1 Porsche 911 RSR-19 of Egidio Perfetti, Matteo Cairoli and Riccardo Pera moved into the lead when Pera wrestled his car past Sernagiotto.

The Porsche, however, had to serve a penalty for contact with the #70 Realteam Racing ORECA 07-Gibson, and that handed the lead back to the Cetilar Ferrari.