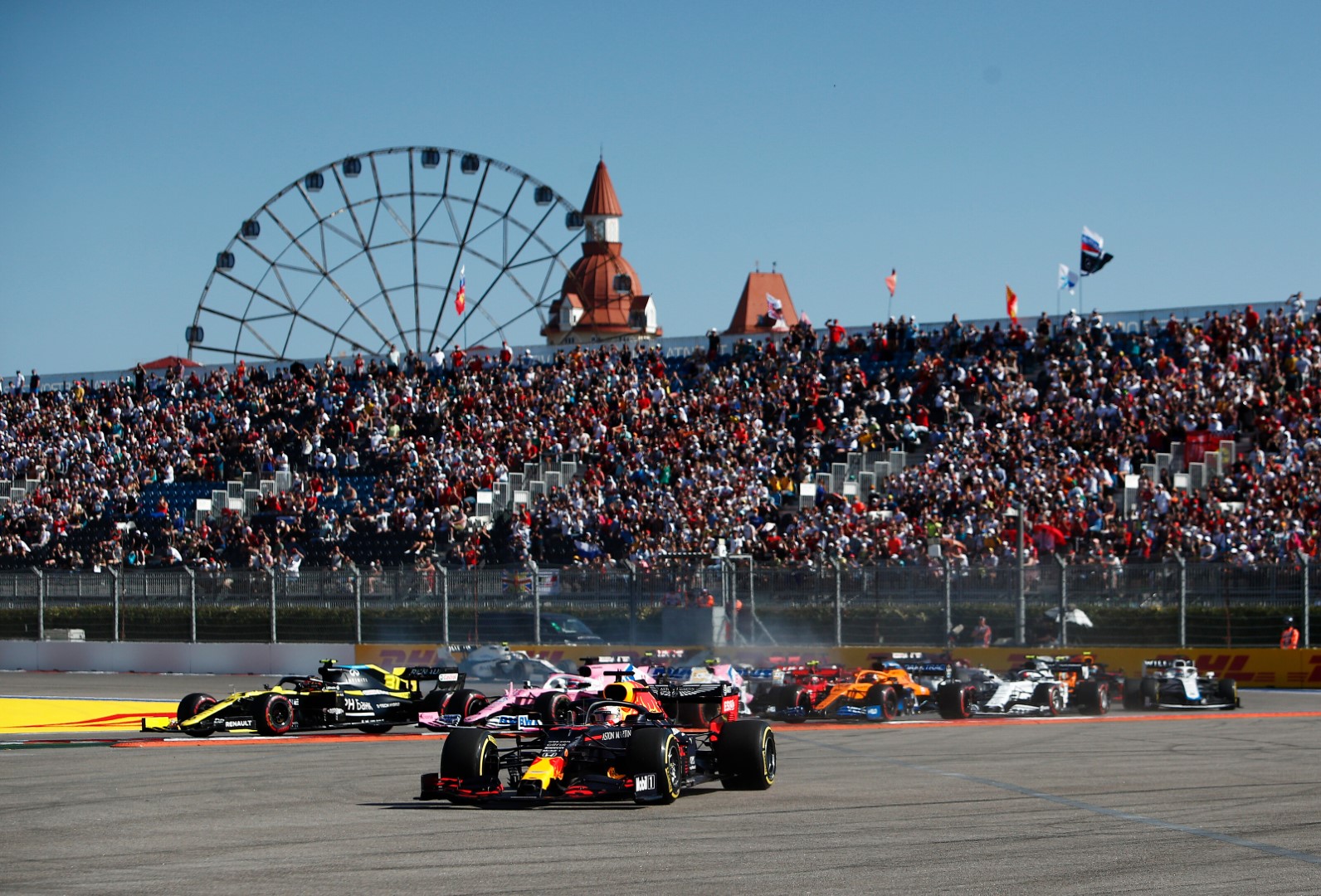 Formula 1 drivers have discussed reprofiling Sochi Autodrom’s Turn 2, according to Williams’ George Russell, who labelled the layout as “terrible” for racing.

Sochi’s Turn 2 is the first braking point of the lap and features a 90-degree right hander that tightens on the exit, where the circuit kinks left, before leading into the long Turn 3.

In recent years the FIA has set up a trio of bollards for drivers to negotiate on the entry to Turn 3 if they run to the left of the orange kerb located on the outside of Turn 2.

If a driver fails to follow the route through the bollards then they risk incurring a five-second time penalty, as was applied to Daniel Ricciardo and Alexander Albon in the race.

The run-off also caught out McLaren’s Carlos Sainz on the first lap as he clattered the inside wall when trying to negotiate the bollards, causing terminal damage to the front-left of his MCL35, and forcing others to take evasive action.

Similar incidents have previously occurred at the start of support events at Sochi.

“Turn 2 at this circuit is firstly one of the worst corners on the calendar and secondly for racing is a terrible design,” Russell said.

“I actually suggested this at a driver briefing earlier in the season: we’ve got the room and the space to create almost a Bahrain-style Turn 1 and 2, almost a hairpin into a kink.

“Firstly that would allow a driver to lunge one another into Turn 1, to give better racing, and also avoid people having to cut the track.

“When you go into a 90-degree corner that actually tightens up when you’re three or four abreast obviously cars are going to get pushed off.”

Renault’s Daniel Ricciardo also suggested that the layout should be addressed.

“The geometry is weird, my situation for example, I locked up, it’s always going to be tight,” he said.

“Just the way it is shaped it leaves you with hope until the very last minute or very last second I should say.

“By the point you have committed you can’t really go back across [to the bollards], you would lose more than five seconds, there is that point of no return and I got to that.

“Turn 2 as they call it, a few of us drivers have been vocal, I think they could do something better with it in general. Even just to allow more overtaking for example. Maybe a different shaped corner, less of a such a short apex.

“They have quite a bit of room to play with, so we have talked about it in the past. So maybe that would eliminate the issue that we are having with this cut through.”

Bottas: Message was riposte to ‘give up’ critics
Kvyat: When we get it right ‘I’m the best, I can fly’