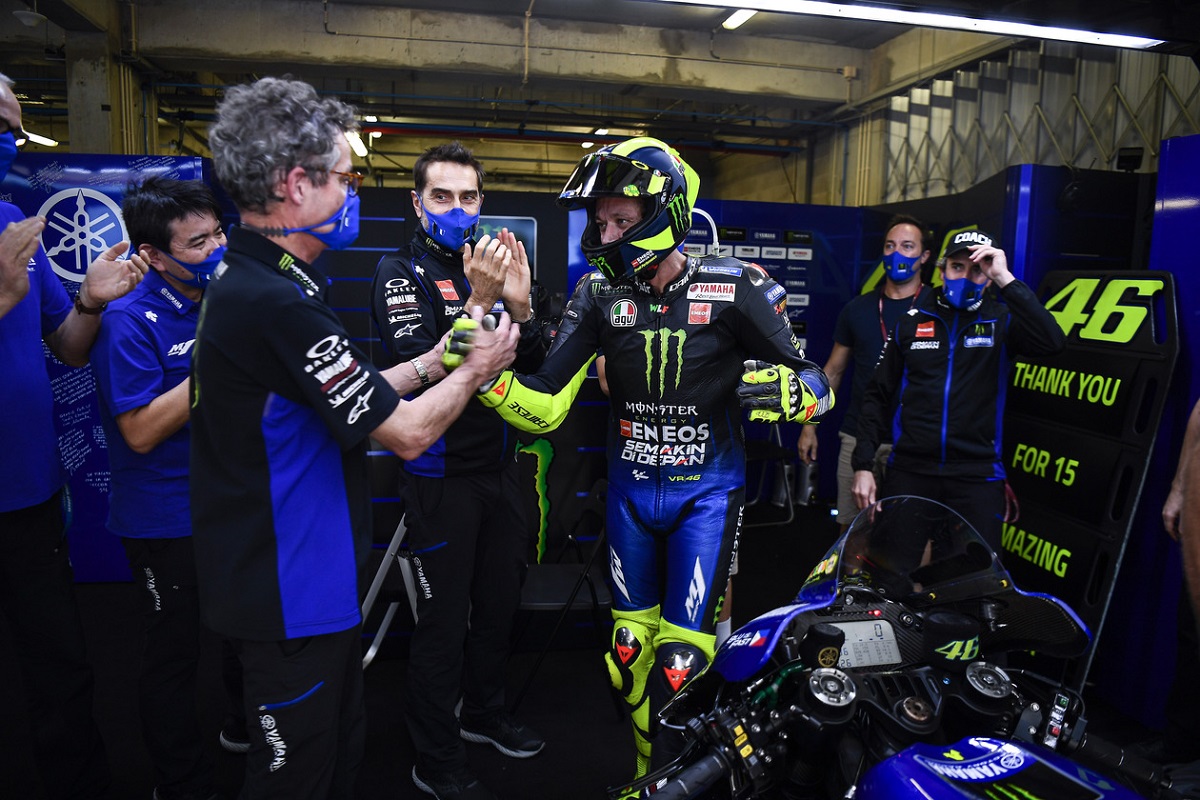 Valentino Rossi says that his swansong as a rider for Yamaha’s factory squad was “emotional”, but a “good story” despite his low-key run to 12th in the Portuguese Grand Prix.

Yamaha announced back in March that Rossi would be replaced in its factory operation by 2019 rookie stand-out Fabio Quartararo, though it was confirmed in September that he would replace the Frenchman in the satellite Petronas SRT Yamaha outfit for ’21 as a factory-contracted rider after months of speculation.

The seven-time premier class champion endured a tough final season at the squad with which he won five of his titles across 15 years-a two year jaunt with Ducati breaking up his two stints with Yamaha-scoring only a single rostrum at Jerez at the start of the year.

The low-light of his farewell campaign was a string of six consecutive non-scores mid-season, with three consecutive crashes followed by him having to miss both Aragon encounters after contracting Covid-19, before retiring from his comeback event in the European GP with a mechanical problem-ending the year 15th overall.

Rossi says he was satisfied with his final performance as a full factory rider in the Portuguese GP despite taking “too much time to adapt to the track” on Friday, taking the chequered flag only a few tenths behind team-mate Maverick Vinales on Sunday after feeling he had “a good pace and I could ride the bike in a good way.”

“It was very emotional (last race with Yamaha), we’ve spent 15 years together which was a great and very important period of my career but also of my life,” said Rossi.

“We’ve had a lot of unforgettable moments and memories, as well as a lot of good friends and relationships so I think today was great, a good story.

“Our weekend didn’t start so well because I took too much time to adapt to the track, but today the result is not fantastic but I was quite strong.

“I had a good pace and I could ride the bike in a good way, so it’s the end of a complicated season for everybody-including me- because we had some good performance but we didn’t finish races, some unlucky and also I made some mistakes so at the end we didn’t have a lot.”

Rossi hopes that Yamaha can up its game in the bike development stakes for next year after its full-’20 spec M1 severely lacked performance in the final part of the year, though Franco Morbidelli’s heavily updated ’19 version allowed him to score two wins in the final three races on his way to runner-up in the riders standings.

The best result across all three ’20 machines -piloted by Rossi, Quartararo and Vinales- across the final seven events was fourth by Vinales in the Aragon GP, Rossi reckoning Yamaha’s rivals “are faster than us” when they fully understand their respective upgrades, thus underlining Yamaha’s need to improve its mid-season development programme “so we can be strong all season”.

“In the last years we’ve been quite strong early in the season, 2017 for example, but we always suffer in the second half,” added Rossi.

“This is mainly because our competitors in the last years have worked very strong, and every year they have a lot of new parts and new bikes so they need quite a lot of time to fix but then when they find the balance they are faster than us.

“We hope that for next year Yamaha work hard and give us more improvement so we can be strong all season.”