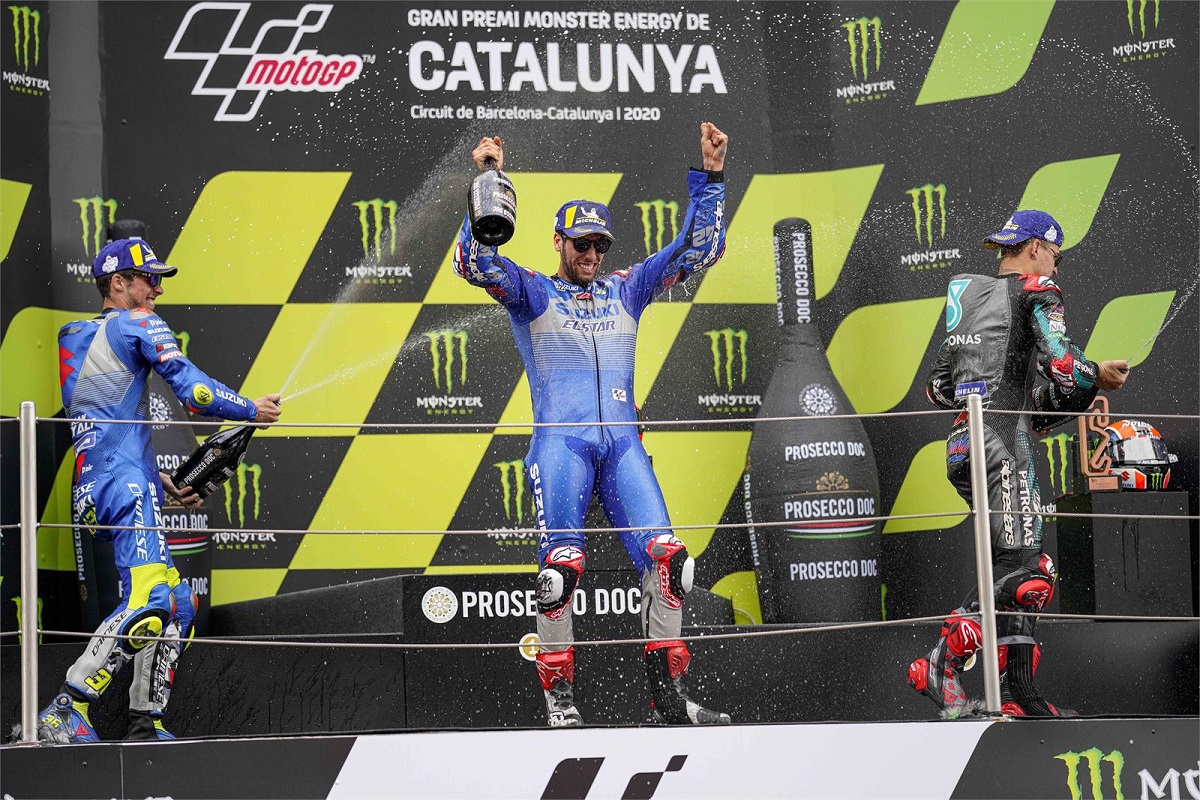 Alex Rins says he is “very happy” to finally remount the rostrum after more than a year, the Suzuki man having “struggled” mentally to move on from his shoulder injury.

Rins’ hadn’t stood upon the podium since his emphatic victory at Silverstone last August, his best result this season being a fourth a Brno while team-mate Joan Mir had racked up three rostrum finishes to lift himself into title contention.

He put on a late charge in the Catalan Grand Prix to pass both Jack Miller and Petronas SRT’s Franco Morbidelli in the latter stages of the event, ultimately finishing third behind race winner Fabio Quartararo and Mir.

The Spaniard reckons his struggles have been “mostly in the head” regarding the after-effects of the nasty shoulder injury he picked up at Jerez towards the start of the ’20 campaign, confirming he is “not feeling any pain” but was still struggling for energy beyond the early laps.

“It’s been a long time since my last podium, but I’m very happy for the rostrum as we’ve struggled a lot the last few races,” said Rins.

“I had the bad shoulder injury in Jerez and since then I’ve struggled a lot, it was mostly in the head because I’m already 100% and not feeling any pain from the bone but still after four or five laps I’m tired and riding on the limit.

“I’m so happy we’ve worked so hard both at and away from the track to be at 100%, and I want to say thank you to Suzuki and my personal team for working to get me back, it’s been a hard season.”

One of Rins’ achilles heels so far this year has been qualifying, the two-time MotoGP victor having managed only 13th on the grid at the Circuit de Barcelona Catalunya, while the other GSX-RR of Mir was only marginally better in eighth.

He reckons that a better set-up compromise is needed in order to cure Suzuki’s lack of performance over a single lap, but lauded the “big step” the Japanese manufacturer has achieved for this season.

“My target was to start well and recover positions in the early laps, in the beginning I was struggling to overtake Pol and lost time with him,” added Rins.

“Then I tried to focus on myself and my riding style and tried to save the tyre as much as possible and you could see the lap times at the end, we were riding 1 or 2 seconds slower.

“It looks like we can hold the pace, we are struggling a lot in qualifying with a new tyre and we are unable to be at the front but then at the end of the race we are there so we need to find a better (set-up) compromise to improve on Saturday.

“They (Suzuki) are doing an incredible job, it’s a shame to not be on the podium in the last race because I had the potential to do so, but they are doing great since I arrived, they have worked hard every year to bring us new items and for this year they’ve made a big step.”

Kvyat: When we get it right ‘I’m the best, I can fly’
Rossi: ‘Two mistakes in a row have ruled me out of the championship’