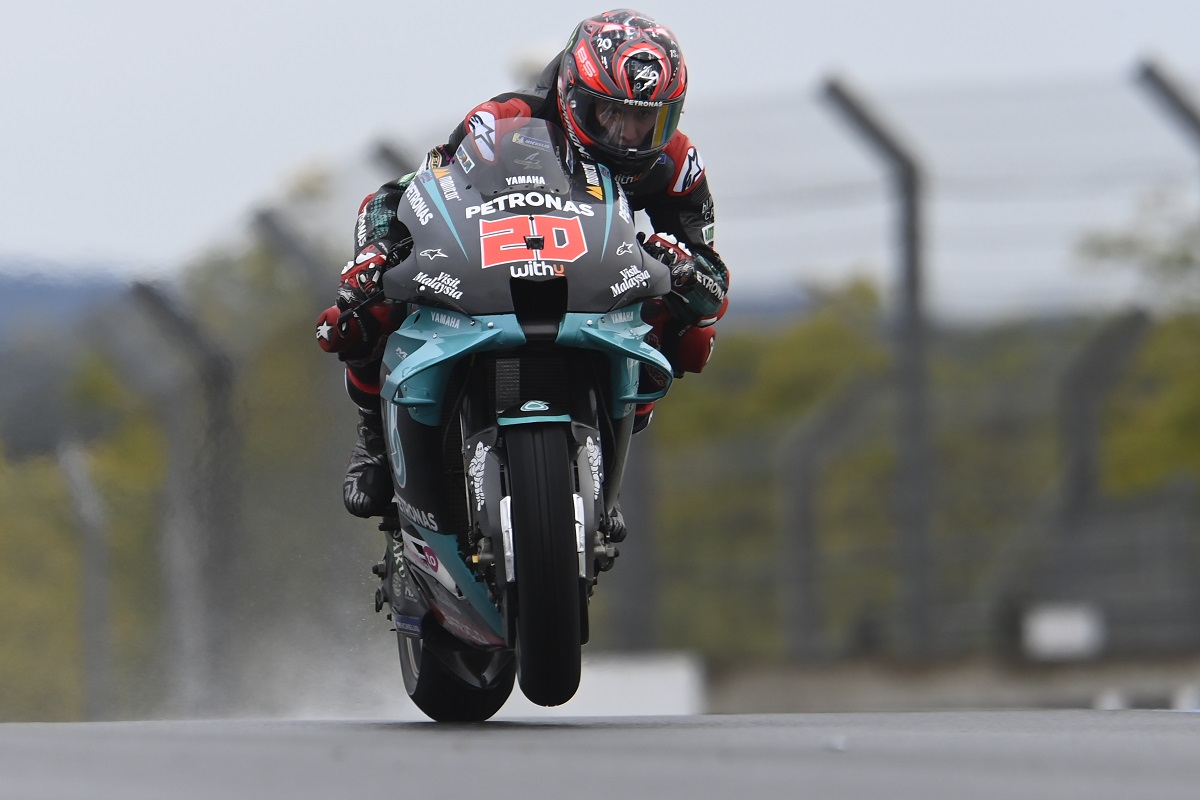 Fabio Quartararo fired in a late flyer to snatch pole position for the French Grand Prix away from Pramac Racing’s Jack Miller at the death.

Quartararo has looked to be the form man across the weekend so far, and made his intentions clear early in Q2 with the fastest lap of the weekend-a 1:31.665- to hold the early advantage, although Francesco Bagnaia ran him close.

The home hero’s early lap looked nearly impossible to beat as one by one each rider failed to eclipse it, though it was Miller who managed to find a monster three-tenths-of-a-second in the second half of the tour to shoot to the head of the timesheets with just seconds remaining.

As usual though Quartararo had saved his best until last, managing to squeeze an extra couple of tenths from his Yamaha on his final push lap to snatch back the initiative from the Aussie, a rapid 1:31.315 leaving him on pole by 0.222 over Miller.

Danilo Petrucci impressed with the third fastest time to complete the front row despite having to contest Q1 in order to reach the pole shootout.

Q1 got underway 20 minutes later than scheduled due to the preceding FP4 session being red flagged mid-way through due to Miguel Oliveira’s KTM lunching its engine, thus leaving the track coated in oil and forcing a stoppage in order to get the tarmac back to a safe state.

Once the session finally began it looked to be a Ducati vs Honda war, Petrucci firing in a 1:31.952 to immediately book himself a ticket directly to Q2.

Bagnaia came the closest to beating his Desmosedici stable-mate, lapping just a tenth slower to grab the final Q2 spot.

Takaaki Nakagami was the man to narrowly miss out, the LCR Honda racer just lacking the extra tenth he needed to make the step into the pole shootout.

The real surprise though was Suzuki, who failed to make their usual breakthrough when it mattered-limiting title contender Joan Mir to a lowly 14th on the grid, while team-mate Alex Rins fared even worse down in 16th.

Cal Crutchlow meanwhile continued his impressive comeback form from Barcelona to bag fourth on the grid for the French GP ahead of Maverick Vinales’ factory Yamaha, while Andrea Dovizioso put in a decent performance relative to his recent qualifying efforts to take sixth and complete the second row.

Bagnaia was seventh on the second Pramac machine ahead of Pol Espargaro on the first of the KTM’s, with Johann Zarco performing strongly on the year-old Avintia Ducati to secure ninth.

Valentino Rossi will start tenth, while Franco Morbidelli slipped from the back of the front row early in the session to 11th by the end after failing to string together a strong closing gambit, while Oliveira was 12th.

Brad Binder’s recent struggles continued meanwhile as he will take the start from 17th after crashing out on his final Q1 tour, although his previous effort was enough to keep him just ahead of Alex Marquez’s factory Honda.

Aleix Espargaro led Aprilia’s charge in 15th, while team-mate Bradley Smith failed to build on his strong form across the Le Mans event and could only manage 19th.