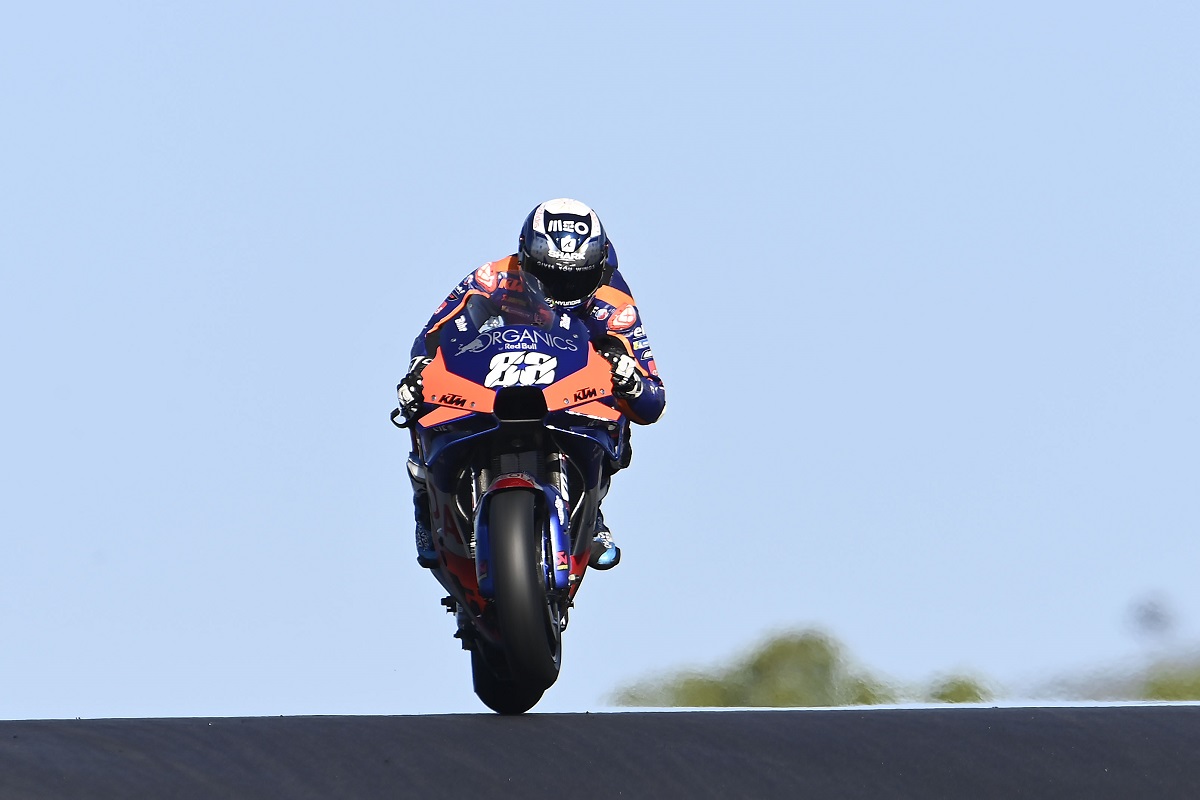 Miguel Oliveira cruised to a commanding second career MotoGP win at home as he headed Jack Miller by over three seconds in the Portuguese Grand Prix.

The Tech 3 KTM racer made a spirited start from pole position, leading Franco Morbidelli at the end of the opening lap by nearly a second.

Oliveira continued to put more and more daylight between him and his pursuers, extending his leading advantage to well over three seconds across the opening half of the contest.

He controlled his lead expertly across the remaining circulations, taking the chequered flag 3.193s   ahead of Miller, while Morbidelli secured the runners-up result in the riders standings with third in the race.

The Petronas SRT mans was forced to keep an eye on a chasing Miller across the entire race distance, the duo having pulled well clear of the tight battle for fourth involving the bulk of the field behind.

Miller remained within a second of Morbidelli for the entire 25 laps, though the Italian’s impressive final sector consistently kept him out of range of the stalking Desmosedici.

Miller put in a storming final couple laps though in a similar vein to his late attack in last weekend’s Valencia GP, pouncing on Morbidelli as the duo approached Turn 13 for the final time.

Miller just about got his GP20 pulled up and was able to manoeuvre the final corner effectively to enact his revenge on losing the win to Morbidelli at the Circuit Ricardo Tormo just seven days prior.

Pol Espargaro won the battle fourth on his factory KTM, the Spaniard recovering from a major mistake at Turn 8-which caused him to drop back behind Cal Crutchlow’s LCR Honda-though he quickly redressed the position.

He then pulled clear from the rest as Crutchlow began to slip back, the Brit being pushed out wide at Turn 1 with only a few laps remaining-thus dropping him back to tenth.

Takaaki Nakagami recovered well to complete the top five from 11th on the grid after fighting his way through the cut-and-thrust battle still ensuing, relegating Andrea Dovizioso from the position with a few tours to run.

Dovizioso himself enjoyed a busy final outing for the foreseeable future, utilising his Ducati’s straight-line prowess to pass his challengers one by one on the run to Turn 1-at times passing multiple bikes-to close out his Ducati tenure sixth.

Stefan Bradl put on a solid display for the factory Honda outfit with his best result of the year in seventh ahead of Aprilia’s Aleix Espargaro, the Spaniard delivering upon the RS-GP’s early weekend promise to score a strong top ten result.

Alex Marquez put in a late charge to take ninth from a fading Johann Zarco in the final couple of circulations, the Avintia pilot completing the top ten in his final race for the Spanish outfit before moving to Pramac next season.

Yamaha’s full-fat ’20 M1’s once again struggled across a race distance, Maverick Vinales its highest finisher down in 11th just ahead of team-mate Valentino Rossi, the seven-time premier class world champion having to make do with 12th in his last event as a full-factory rider.

Crutchlow was shuffled back to 13th come race end, just staying ahead of Fabio Quartararo on the second SRT machine.

Suzuki suffered a disastrous outing as they lost the constructors title battle to Ducati, Alex Rins falling all the way to 15th after struggling for speed late on, while recently crowned world champion Joan Mir retired from 16th after a suspected electronics problem with his GSX-RR.