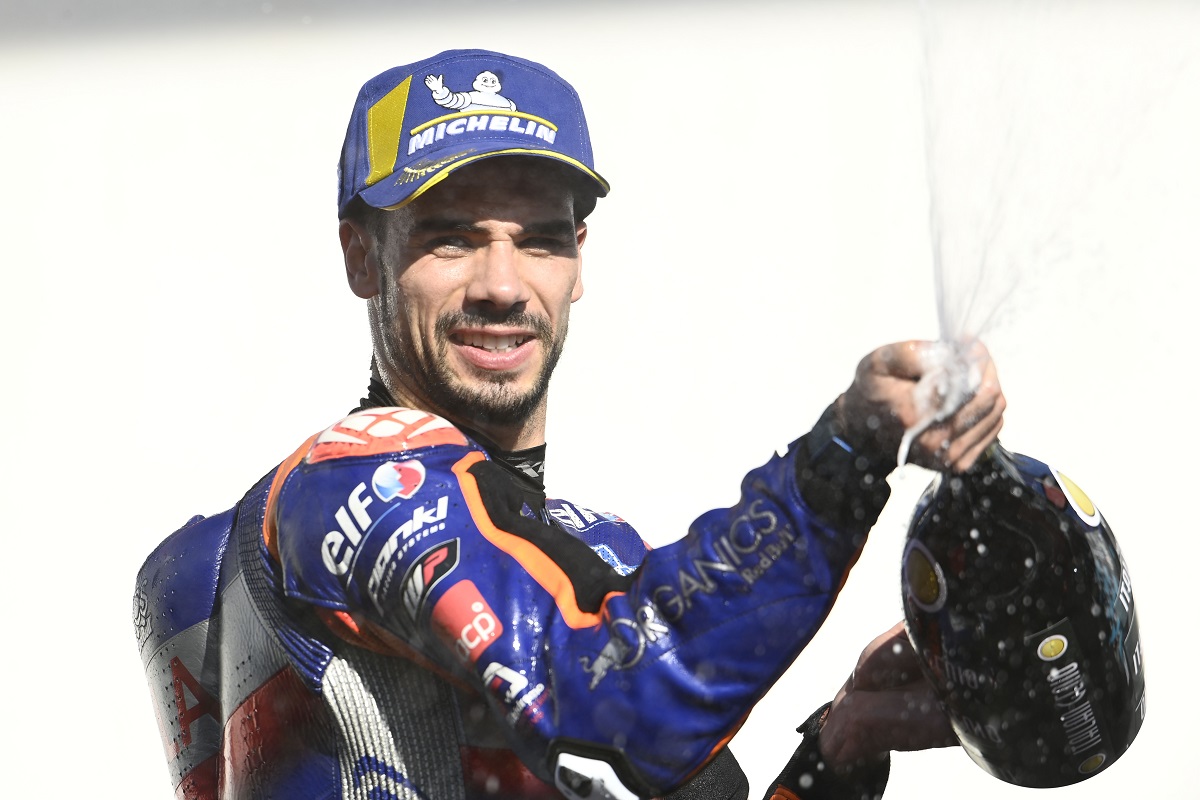 Miguel Oliveira says “he was just hoping for the race to finish” as he guarded a near four-second lead in the closing stages of the Portuguese Grand Prix.

The Tech 3 KTM rider held the lead from the classy pole position he secured in qualifying on the run to Turn 1, immediately establishing a solid lead across the remainder of the opening lap.

He managed to extend his lead well out of slipstream range after a few tours and continued to drive away from the chasing Franco Morbidelli by setting a string of fastest laps around half-a-second faster than anyone else.

He lead stretched as high as four seconds before he rolled off to control the race from the front across the second half of the 25-lap contest, ultimately taking the chequered flag 3.1 seconds clear of runner-up Jack Miller to score his second win of 2020.

Oliveira says the race felt “longer than I expected it to feel”, and that his heart rate crept up in the final half-a-dozen tours after sweat began to cloud his vision as he fired into the tricky Turn 1 right-hander.

“It (race) was longer than I expected it (to feel), I saw we had six laps to go and I just wanted it to end sooner,” said Oliveira.

“With six laps to go I started to get little drops of sweat on the inside of my visor just before the first braking point, so I couldn’t really see where I was going and every lap it was getting harder to see, so I was just hoping for the race to finish.

“I don’t need to tell you how it feels, I lack the words for it.”

“It’s a great emotional day, I have really happy feelings and to win your home Grand Prix is something every rider wants to do, I only have one chance so I had to make it count.”

Oliveira affirmed his delight to have given the Tech 3 squad a second ever victory in his last race with the outfit ahead of moving to the factory KTM team next season, adding that he is “optimistic” that the Austrian manufacturer can make further progress with the limited work it can do on its RC16 over the winter.

“I hope I’ve given a good contribution to the team, being a rookie last season I think we were able to learn from each other and that’s something unique,” continued Oliveira.

“I’ve given a lot of things to KTM but also Tech 3 has given a lot to me and I couldn’t be more happy that I’m leaving the team at this point with a win, they truly deserve it and I just hope going back to the factory team that I can develop good human relationship (in the same way) that I have in these two years with Tech 3.

“I’m optimistic about the future because our package can still undergo some modifications which is nice, the bike itself is performing really well and I’m now able to ride the way I want to.

“For sure our opponents will not sleep during the winter and they will work hard, as always I will expect tough competition because this season was crazy, the level of every rider and team satellite or non satellite was so equal so you have to be on your toes and on your A-game every time you head out on track or else you’ll be out of the points.”

Oliveira’s victory means he closes out the ’20 season ninth overall, having passed Takaaki Nakagami at the death, while he sits just 14 points shy of third-placed Alex Rins after an impressive sophomore premier class campaign with the satellite Tech 3 operation.