Morbidelli: “I had to find something extra” to fend off Miller for Valencia GP success 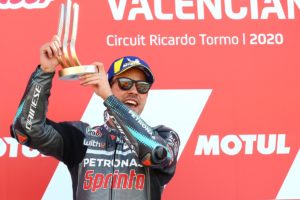 Franco Morbidelli says he had to “dig deeper” on the final lap of the Valencia Grand Prix to hold off a charging Jack Miller for his third career victory.

Morbidelli looked to repeat his commanding wins in the San Marino and Alcaniz GP contests after leading every lap of the Valencia GP, though Miller looked to pull off a late upset as he closed to less than four-tenths behind the Petronas SRT Yamaha in the closing laps.

The Pramac Ducati pilot utilised the straight-line prowess of his Desmosedici to blast alongside Morbidelli on the run down to Turn 1 as the pair started the final tour, though he carried too much momentum into the bend and allowed the M1 back down the inside into Turn 2.

A brave move from Miller saw the Aussie once again back into the lead with a late do-or-die pass at Turn 4, though Morbidelli got the last laugh after snatching back the leadership into the subsequent left-hander of Turn 5.

Miller attempted to take advantage of the less-powerful Yamaha on the run to the line as he squared off the final bend, but would ultimately lose out by just 0.093.

A pumped Morbidelli hailed Miller following the pair’s battle, remarking “it’s always nice battling with him”, the Italian insisting the one-time premier class winner was “just as good as me.”

“It was an unbelievable win, I gave everything all race long and then at the end I had to dig deeper to find something else because Jack (Miller) was there on the final lap and able to challenge me,” said Morbidelli.

“I had to find something extra and luckily I was able to pull it out and have a wonderful fight against him, it’s always nice battling with him, win or lose, so I enjoyed the fight.

“Congratulations to him because he was just as good as me, I have a great feeling about this year as we’ve done brilliantly and I look forward to celebrating tonight before heading to Portimao.

“I just had to try and see what he was going to do next and stick my bike straight back underneath him, that’s all I was thinking about on the last lap.

“Luckily I had enough tyre to fight which was important, the team did a good job too so everything was great.”

Morbidelli’s second success in the past three contests leaves him heading the battle for the runners-up trophy in the riders standings heading to the last race of the year at Portimao next weekend, after Suzuki’s Joan Mir wrapped up a maiden title by finishing seventh in the Valencia GP.

The ’17 Moto2 world champion heads to Portugal just four points clear of Mir’s team-mate Alex Rins after the Spaniard recovered from 14th to fourth in the second event held at the Ricardo Tormo venue.

Maverick Vinales remains in with a shout at salvaging second overall 15 points down on Morbidelli, while Fabio Quartararo and Andrea Dovizioso sit fifth and sixth a further two points back tied on 125 a piece.

Pol Espargaro is the last man within contention of denying the Italian his championship position, the KTM racer 20 points in-arrears.