Mercedes won’t yet ‘flirt’ with other drivers for 2022 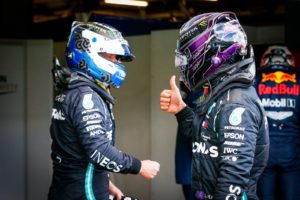 Mercedes says it will not scout drivers outside of Lewis Hamilton and Valtteri Bottas for 2022 until it has a clear idea of its future direction.

Mercedes agreed a one-year extension with Bottas last summer before finally ratifying an agreement with Hamilton in February to cover the 2021 season.

It leaves the title-winning team in the unusual situation of having no driver confirmed for the 2022 campaign.

But Mercedes boss Toto Wolff has emphasised that its priority will be in discussing the situation with its current line-up before considering alternative options.

“We have a mutual understanding of what we want to do in the future, and that will be also the case in the discussions with Lewis going forward,” said Wolff.

“Max [Verstappen] is certainly an outstanding young driver that will be on everybody’s radar in the future.

“As I said before we are not flirting outside before we have a clear understanding with our two drivers.

“We have agreed [with Lewis] that we want to pick up the discussions much earlier this year to avoid the situation like we had in 2020.”

Mercedes-backed George Russell is entering the final season of a three-year deal with Williams and impressed during his stand-in outing in Bahrain last December.

On the situation facing both Bottas and Russell, Wolff said: “Valtteri is always going to have unconditional support from the team, that is not going to change in 2021 either, in order to perform as good as he can.

“He knows it is within his own hands to influence the future.

“As for George, we also know what we have in George, and the future is bright for George in any case, and it [his future] depends how the driver situation within Mercedes pans out.”