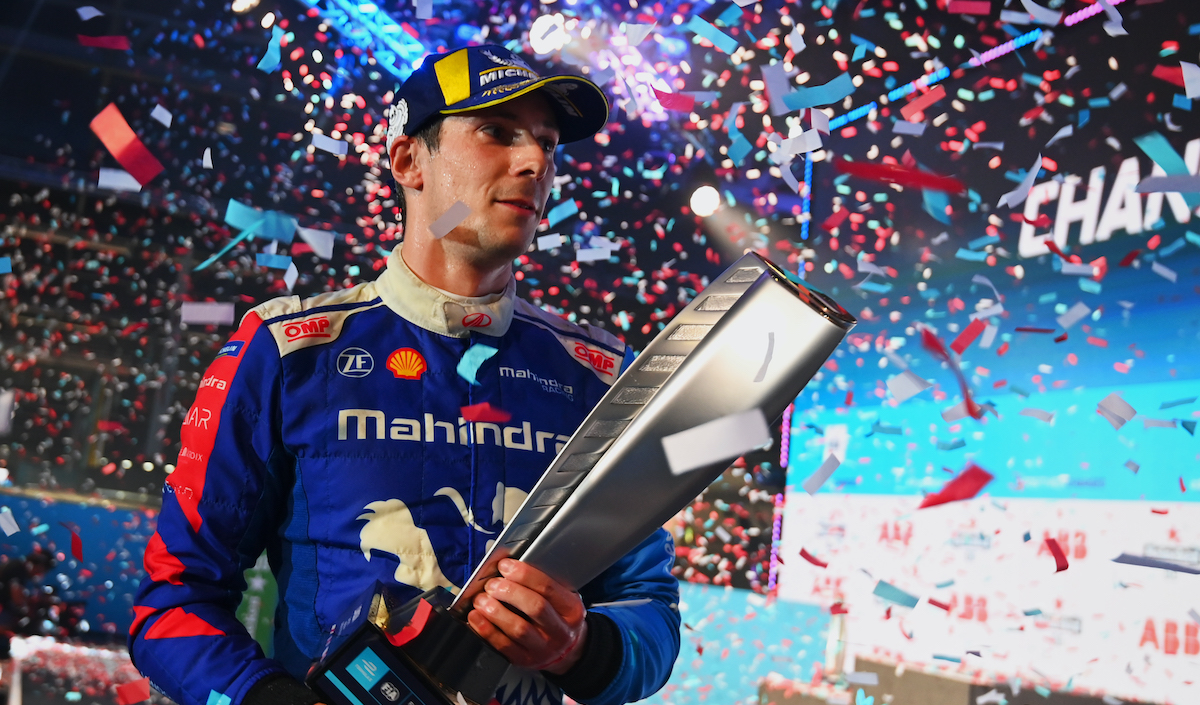 Alex Lynn claimed an emotional home victory at the ExCeL Centre on Sunday in the second race of the London EPrix weekend, to leap up the championship order and firmly place him in contention heading into the season finale weekend next month.

Mercedes’ Stoffel Vandoorne fired away from pole position, having to defend an immediate attack from Oliver Rowland into Turn 1, but once that was dealt with, the Belgian quickly opened up a gap. Meanwhile his team-mate, Nyck de Vries, jumped Lynn on Lap 2 to claim third.

Further down the field, the standings’ top two came to blows on Lap 4, with reigning champion Antonio Felix da Costa shoving Sam Bird’s Jaguar with an elbows-out pass for 18th as the pair scrapped hard for whatever they could get their hands on.

The Safety Car made an early appearance after Rene Rast and Sebastien Buemi made contact at the switchback. The Audi driver would retire on the spot whilst Buemi was able to recover to 11th place at the finish.

At the restart De Vries would make it a Mercedes 1-2 as he jumped Rowland thanks to some leftover Attack Mode power.

A second Safety Care appearance followed on Lap 11 after contact between Da Costa and Porsche’s Andre Lotterer at Turn 1. That led to a moment of genius – or so it seemed at the time – for Lucas di Grassi as he took a trip through the pits in a bid to jump into the lead as the pit speed limit is quicker than the pack was travelling around the indoor/outdoor circuit.

As the pack went racing once again on Lap 13, drama ensued down at the double hairpin. Rowland made his move with a surprise lunge on Vandoorne for second spot. A bump in the braking zone left the Nissan driver a passenger as he speared into the side of the Belgian’s Mercedes. The pair were all tangled up, allowing de Vries to pick up the pieces and pinch second – and then first when leader di Grassi went for his final Attack Mode. Unsurprisingly, Rowland was slapped with a 10-second time penalty.

Heading into the final quarter hour, and di Grassi made the most of that 35kW boost to slice by de Vries into Turn 1 on Lap 16. On the next tour, Lynn followed.

Outside the top three, it was Evans who was best of the rest though four seconds back from the trio at the front. Robin Frijns made his way by Guenther for fifth into Turn 1, going all the way around the outside of Guenther’s BMW. The Dutchman wasn’t done there, though, and set about hassling Evans for fourth. With his mirrors full of the purple Envision Virgin Racing machine, the Kiwi jumped for his second Attack Mode activation, but missed the loop and had to go again on Lap 22 – allowing Frijns by.

The Kiwi atoned for his error in fine style down at the hairpin half a lap later with a textbook dummy on Frijns that took the Dutchman by surprise.

Bird had clambered his way up from 21st up to 11th and smelled valuable points with Nato just ahead. The Brit sold the Frenchman the dummy before diving up the inside of the Venturi. Nato defended hard and the pair both ended up damaged and out of the running.

Di Grassi’s fun and games with that opportunistic trip through the pit-lane wouldn’t stand, with the race leader penalised via a drive-through penalty for a Safety Car procedure infringement – meaning home hero Lynn would inherit top spot and the race victory at the chequered flag, with di Grassi’s failure to serve his penalty.