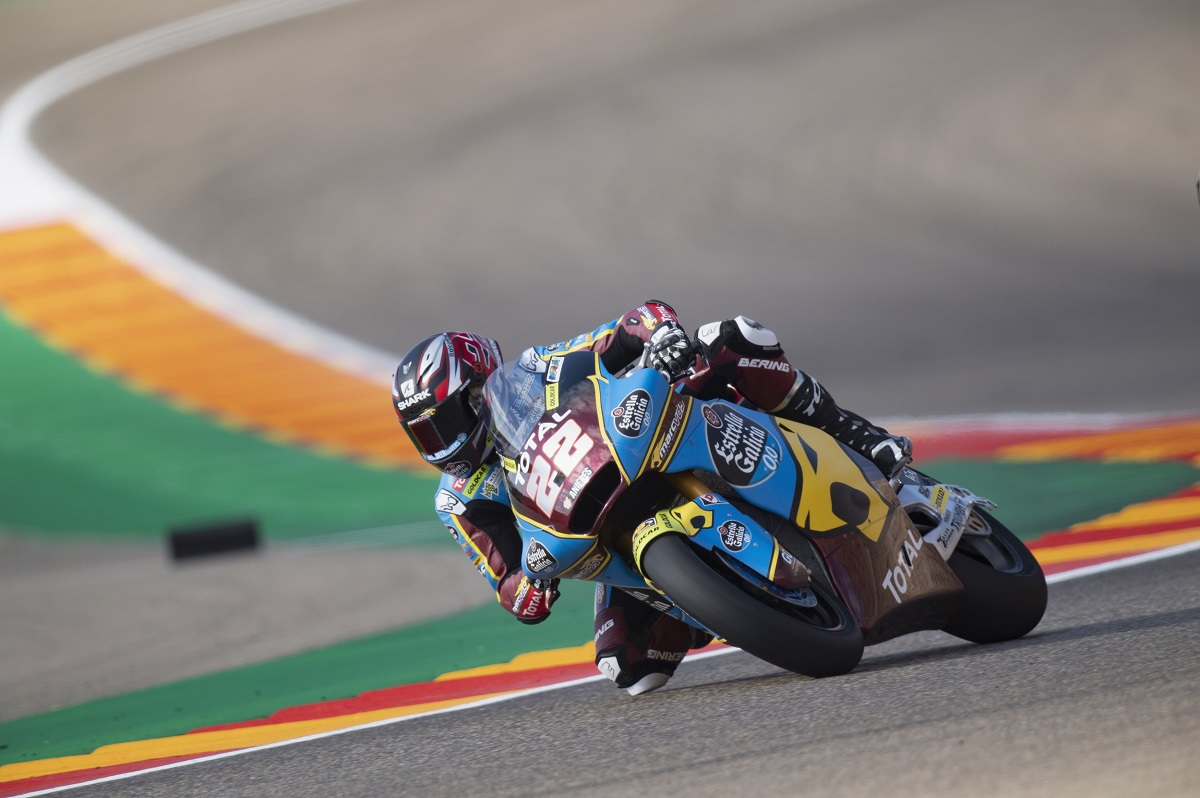 Sam Lowes breezed to a second Moto2 win of the season at Aragon after long-time leader Marco Bezzecchi crashed out on the penultimate lap.

Lowes dropped to second off the start after Bezzecchi made a lightning getaway to move into the lead on the run to Turn 1, though the Brit quickly tried to claw his way back to the leadership.

A small battle between the Marc VDS racer and Fabio Di Gianantonio allowed Bezzechhi a breather, though this was short-lived as Lowes closed back in after retaking second, bringing the Speed Up with him.

It was Di Gianantonio though that looked to be the man in form as the race inched towards its second half, the Italian first passing Lowes before making the move for the lead onto the back straight just prior to mid-distance.

Di Gianantonio’s time at the front was to be short however as he lost the front of his Speed Up on entry to Turn 2 just a few corners later, retiring in the gravel and thus leaving Bezzecchi and Lowes to battle for the win.

While Bezzecchi couldn’t shake Lowes from his tail across the remaining tours, the VR46 rider looked secure in the lead and seemed to be managing his advantage until disaster struck just two laps from home.

In an incident almost identical to Di Gianantonio’s off, Bezzecchi tucked the front of his Kalex and slid off into an early exit, leaving Lowes with a four second gap to the battling Enea Bastianini and Jorge Martin behind.

This allowed him to back off and bring his machine home for a second successive victory, his result moving him into second in the championship standings following an early crash for Luca Marini.

Holding a lead of 15 points coming into the Aragon Grand Prix weekend, Marini struggled for outright speed across the event-as evidenced by his seventh placed grid start-but managed to hold position in the opening stages of the contest.

This wasn’t to last though as he dropped his VR46 bike on the exit of Turn 12 after tapping the throttle a little too early, sliding off into retirement and leaving his series lead vulnerable.

The battle for the runners-up position went down to the final bend, Martin managing to find a second wind late on after being passed by Bastianini with around a third of the encounter remaining.

The duo traded positions several times over the final couple of tours, though Bastianini would make the decisive move for second heading onto the back straight for the final time, taking the chequered flag four seconds behind Lowes.

Martin’s third position was his first rostrum appearance since taking second in the Styrian GP in August, while Jake Dixon enjoyed a quiet race to score his best ever Moto2 result in fourth.

Remy Gardner managed to pass Hector Garzo at the death to bag fifth for the SAG outfit, while rapidly improving rookie Marcos Ramirez also managed to squeak ahead of the Pons rider before the race was run.

Bastianini now holds a slender two point lead over Lowes heading into next weekend’s Teurel GP at the same Motorland Aragon venue, with Marini having now slipped to third overall five points down on the Italtrans pilot.