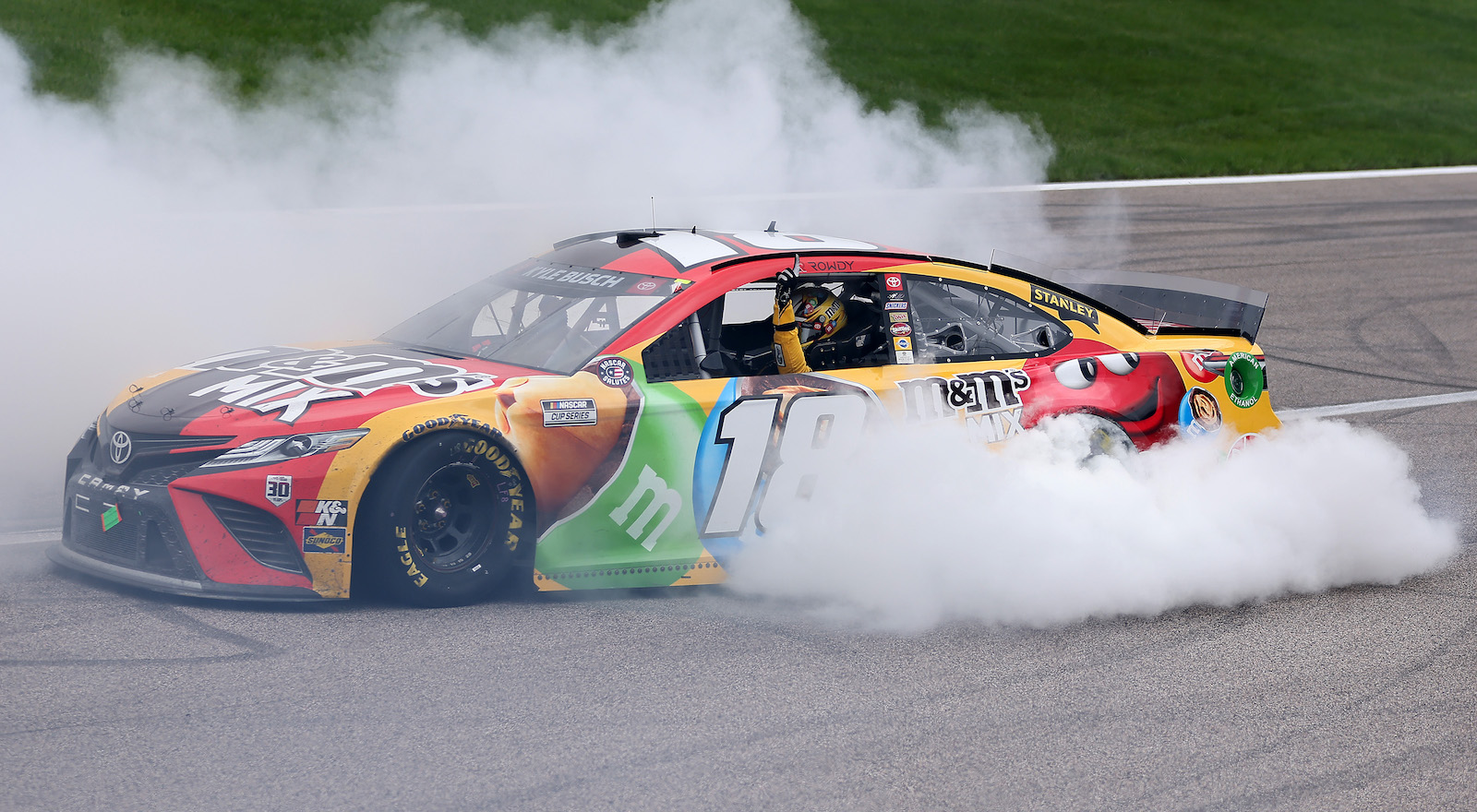 Kyle Busch completed the weekend double at Kansas Speedway, adding to his NASCAR Camping World Truck Series win from Saturday with a win in the Buschy McBusch Race 400 NASCAR Cup Series race on Sunday. The win on Busch’s 36th birthday was Busch’s first Cup Series victory of the 2021 season, 11 races into the year, and the first, ever, for crew chief Ben Beshore.

“It’s awesome. Just such a testament to this team and everybody at Joe Gibbs Racing,” Busch said. “Ben Beshore, his first win as a Cup crew chief. It’s awesome to put M&M’s back in victory lane – M&M’s Mix on board with us here this weekend. Super thanks to our vendor partner, Hy-Vee; they did a cool promotion with Rowdy Energy and M&Ms a couple weeks ago. Great things going all around. It’s cool to come back to Kansas; it’s great to get back to victory lane. I have to thank my teammate, [Martin] Truex Jr. I forgot to mention it on television, but I just saw the replay, and he was behind me, pushing me and gave me one hell of a run down the frontstretch to get me clear. That was the winning ticket for us.”

Kevin Harvick finished second after an uncontrolled-tire penalty during a lap 230 caution for the retrieval of another team’s uncontrolled tire. Brad Keselowski and Matt DiBenedetto finished third and fourth to, along with Harvick, put three Fords inside the top-four of the finishing order. Chase Elliott rounded out the top-five.

“We had the right pit strategy once the cautions came out, there,” Harvick said. ”We had the pit-road penalty and came in for tires and Rodney [Childers, crew chief] made a great call of coming back in to put tires on, and that kind of put us on the offense. We were able to be really aggressive on the two restarts we had at the end and were able to make up some ground. Everybody on our Busch Light Ford Mustang did a great job today of just hanging in there. We made a few mistakes, but we made our car better throughout the whole day and were more competitive than we had been in the last couple mile-and-a-half races.”

Kyle Larson dominated the race, leading 132 laps of the 267-lap race, but wound up 19th as a result of contact with Ryan Blaney and the wall just before the white flag. Blaney wound up 21st.

Larson previously lost the lead to Denny Hamlin with 30 laps remaining, but retook the position when Hamlin got into the wall a few laps later. Hamlin hit the wall harder with 22 laps remaining, bringing out a caution. After another caution on lap 253 of the 267-lap race, Busch took his race-winning lead on a lap-258 restart.

“You don’t know who’s going to pick behind you. You can guess, but you don’t really know. A couple of the times that I guessed, I guessed right,” Busch said of making the right lane-choice decision to take the lead. “A couple times I guessed, I guessed wrong. It’s just a matter of what’s going to happen behind you. I felt like if I could get Truex behind me, that would be the best thing for us. Being a teammate, he would help push, and I’d tell him when we’re going to get the best run we could, and it all worked.”

Larson started in the 32nd position as a result of a blown engine a week earlier in the opening laps of the race at Talladega Superspeedway, but he got to the front to lead four laps in the opening 80-lap stage and dominate the race from the beginning of the second stage.

Pole sitter Keselowski led most of the opening stage, running up front for 72 of the 80 laps before falling back to fourth as Busch led the final four laps of the stage en route to the stage-one win.

“What’s really cool is that we started the race good and we worked our way forward from the start of the race,” Busch said “We made minor adjustments all day to the car and nothing really did anything. We kept getting tighter as the day went on, even though we were trying to free up. We did a long sim session this week; that was helpful. I feel like we’re really close for Kansas, at least, and what we can do and what we can learn on that. I look forward to, hopefully, being able to celebrate with my team and, hopefully, have a good night tonight. It’s cool to be able to work the way we did today.”

Ricky Stenhouse Jr. stayed out longer than everyone else during the cycle to lead laps and hope for a caution that didn’t come. Larson, on newer tires, was able to catch Stenhouse and retake the lead on lap 145 before Stenhouse finally made his pit stop.

Larson, once back to the lead, maintained the position until another cycle of green-flag stop, the final one of the race. Larson, once again, gave up the lead to pit on lap 213. Chris Buescher, like Stenhouse before him, stayed out longer, waiting until 226 to make his pit stop. When Buescher finally stopped, Larson retook the lead.

“At the end there, I was second through three and four and came off of four and the 2 [Keselowski] and the 4 [Harvick] somehow got linked together and went flying past me doing the old bump draft deal. When they got to turn one, the 4 never lifted and turned the 2 sideways right in front of me, and I had to stop, so I lost two more spots on the last lap, because I lost all my momentum. Tough deal there, but overall, just a tough day for us. We started, there, mid-pack with our Auto-Owners Camry, and it took a while to get any progress. We struggled with the handling, back and forth between tight and loose all day. Just could never get it all tied together. Never could get it to do what we wanted. It was a real handful in traffic. Scratched and clawed for the best we could get, and that was sixth, which is not all that terrible.”