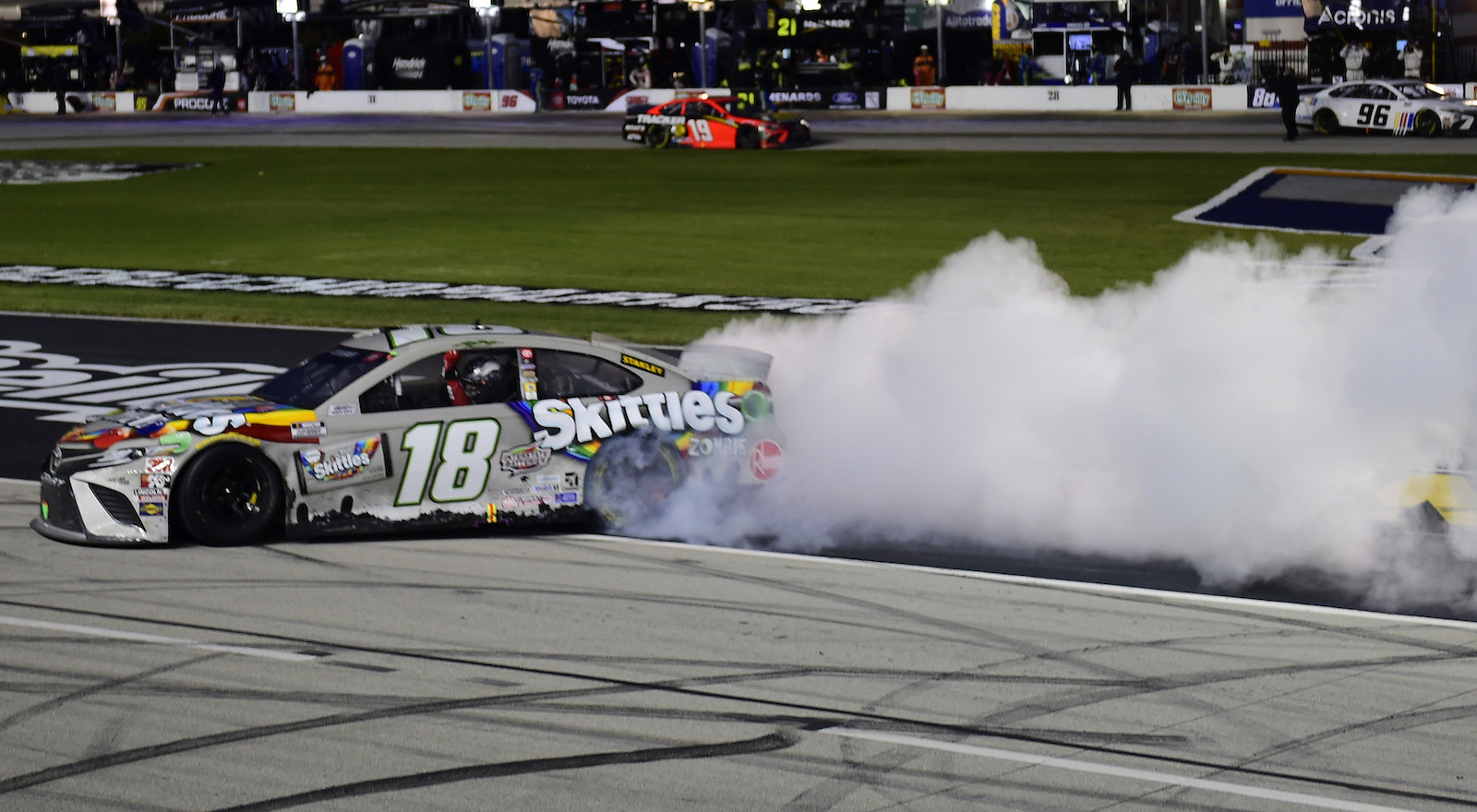 The AutoTrader EchoPark Automotive 500 at Texas Motor Speedway finally resumed Wednesday evening after being red-flagged for misting rain since Sunday after the completion of 52 laps. When the race took the checkered flag three days after taking the green, reigning NASCAR Cup Series champion Kyle Busch claimed his first win of 2020, 34 races into the 36-race season. Busch’s latest win came two races after he was eliminated from the playoffs.

“We finally got it,” Busch said. “I was so nervous. I was nervous the whole last run. I’ve been in this position so many times. The last three laps, though, that’s like winning the championship — that’s how nervous I was. I can’t believe it, but just so proud to be here. My team guys, awesome pit stops, they were phenomenal. I appreciate M&Ms, Interstate Batteries, Rowdy Energy Drink. We’re ready to fight next year; we’ll be back.”

Joe Gibbs Racing finished one-two, with Busch’s teammate Martin Truex Jr. Toyota finishing second after starting in the back because of an issue with his spoiler. Truex was inside the top-five of the running order by the time the race resumed Wednesday, using pit strategy during the three cautions in Sunday’s 52 laps.

“I think, coming here, we had a lot of confidence, and obviously, we had a good car,” Truex said. “This time of the year, playoffs, to finish second is great, but it’s not enough. I don’t know. Excited about Martinsville. I know we can win there, and obviously, we’ve shown that in the past. It’s a new race and a new week. We have to figure out how to be better than we’ve been there and feel like everybody will get better. Looking forward to it; excited for the opportunity to get to do this. Hopefully, we’ll put ourselves in another championship race. Great job by our team. I can’t say enough. We just lack a tiny bit of speed off the 18 [Busch].”

“It was definitely hard fought,” Bell said. “I felt like my Procore Camry was extremely fast. If I ever could have got by the 19 [Truex], I feel like I would have been able to get up the 18, but to pass him is another thing. I was able to drive up through the field pretty good, but once you got up to the top couple cars, passing got a little bit tougher. I’m really proud of everyone on this Procore Camry 95 team. They’ve been bringing really good race cars to the track. We just haven’t been able to finish well, and today we finally got one.”

Busch took his first lead when Truex ran out of fuel during a cycle of green-flag pit stops on lap 199 and led most of the remaining laps of the 334-lap race. After Busch made his pit stop in that same cycle, he cycled back to the lead on lap 207 and won the second stage of the race on lap 210.

Busch stayed out during the caution that followed the second stage, which was the eighth and final caution of the race. He continued to lead until a final cycle of green-flag pit stops inside the final 80 laps.

Busch cycled back to the lead, with Clint Bowyer in second, with 54 laps remaining. With 50 to go, Busch lost the lead to Bowyer. But Bowyer pitted too early during the cycle to go the remaining distance and, as a result, gave up the lead to Busch to pit, again, under green with 23 laps remaining.

Busch ran out of fuel after his celebratory burnout.

“I came in here to do a celebration, and it was out,” Busch said. “It’s running on the pump, but it’s running low. I don’t know if there’s anything left in the lines for me to get back to victory lane, so if the tower is listening, send a tow truck in case I can’t go.”

Kevin Harvick started on the pole and led the first 28 laps Sunday before sliding into the wall when the track began getting wet because of the mist. He fell off the lead lap when he made an unscheduled pit stop because of the incident and was 36th, a lap down, when the race resumed Wednesday.

“It just went straight. Unfortunately, we were the first one to the damp PJ1 [traction compound],” Harvick said. “That’s the downside to it. Once it’s wet, it’s like ice. I couldn’t get out of the gas and couldn’t do anything but go straight. It had okay speed still, so work on it and figure it out”

Denny Hamlin also nearly wrecked in the same area of the race track just before Harvick. Hamlin was collected in a multi-car wreck Wednesday on lap 60. Hamlin, though, still managed a 10th-place finish, finishing ninth.

Harvick got back on the lead lap during the lap-60 caution, but with eight laps remaining in the race, Busch passed him, putting Harvick back down a lap. Harvick wound up with a 16th-place finish, the first not on the lead lap.

Alex Bowman inherited the lead when Harvick wrecked and was up front when the yellow flag waved for the rain mist on lap 43. Pit stops were completed before Sunday’s red flag, though, and with varying pit strategies, Bowman was outside the top-five after a four-tire pit stop.

Bowyer, after restarting with the lead Wednesday, remained up front to win the first 105-lap stage.

Bowman retook the lead for the start of the second stage with a fuel-only pit stop. Using the same fuel-only strategy, Ryan Blaney took the lead during a lap-134 caution. Truex, then, passed Blaney for the lead on lap 156.

Blaney and Bowman rounded out the top-five of the finishing order, finishing fourth and fifth, respectively.

“Not a bad night for our DEX Imaging Ford Mustang,” Blaney said. ”We had pretty decent speed all day and led there a little bit and, then, kind of fell back but ran in the top-five most of the night. I just lost a little bit of speed at the end. My car felt pretty good, but just couldn’t really keep up. The track got super cold and grippy at the end. It gained grip with the night time coming but, overall, not a bad day. We’ll take a top-five and go on to Martinsville. We were really good there earlier this year, and I look forward to getting back.”