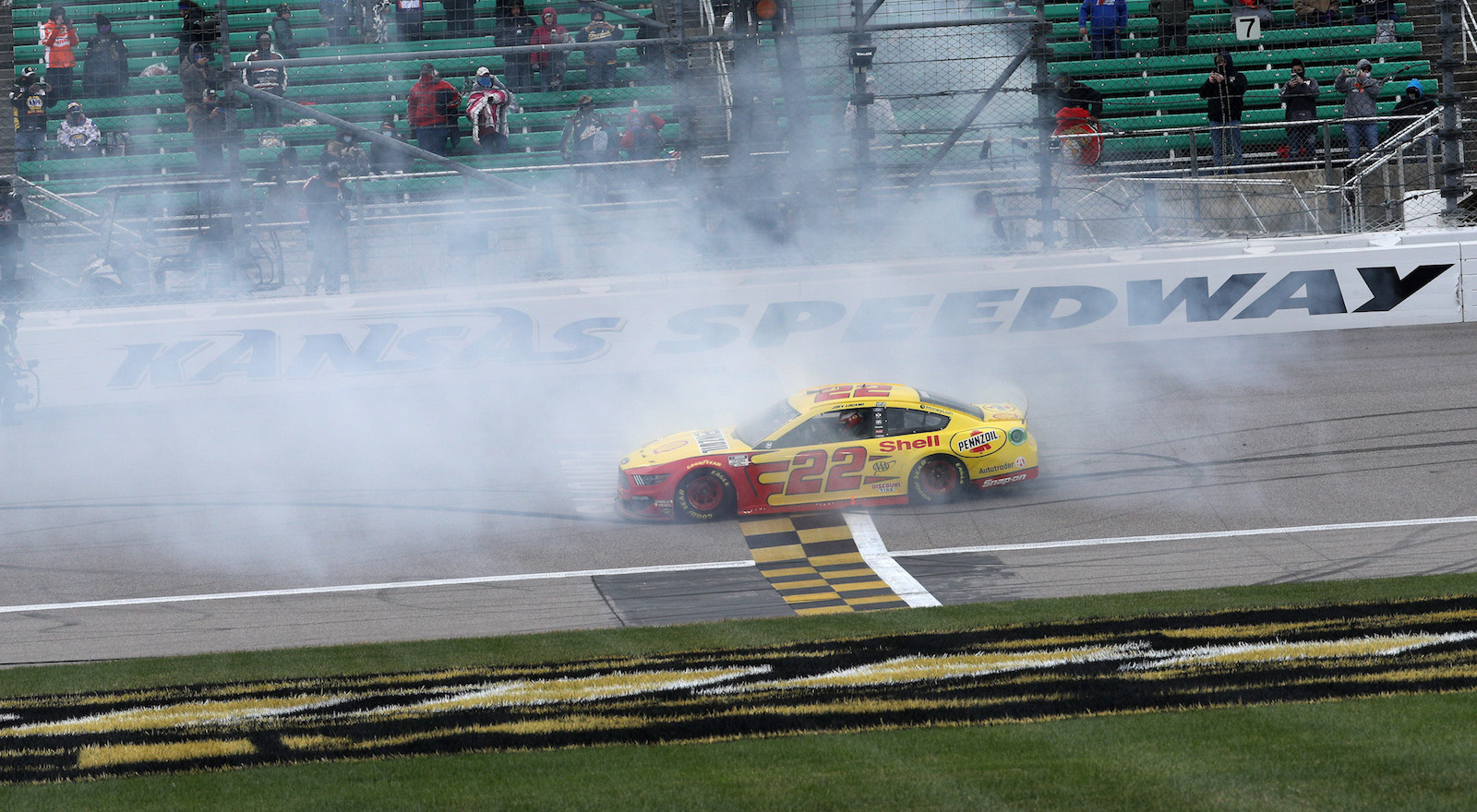 Joey Logano held off Kevin Harvick to win the Hollywood Casino 400 at Kansas Speedway on Sunday. The win was Logano’s third of the 2020 NASCAR Cup Series season but his first since the fourth race of the season at Phoenix Raceway in March. With his latest win, Logano became the first driver to secure a spot in the championship four at Phoenix Raceway in November.

“You come into this race knowing that, if you can win this thing, you have an amazing advantage,” Logano said. “The same thing happened in 2018 when we raced for the win at Martinsville, knowing that we have two races to battle for nothing but the championship. I can’t believe it, especially the way the beginning of the race was going and running back there not scoring stage points. It was a good strategy by Paul [Wolfe, crew chief] and good pit stops, and now this Shell Pennzoil Mustang is going to race for a championship at Phoenix.”

Harvick finished second for a Ford one-two finish after battling Logano in the closing laps while also holding off Alex Bowman. Harvick led a race-high 85 laps of the 267-lap race.

“I was a little bit tighter low,” Harvick said. “I needed the lap cars to time out well. Joey is a good blocker.”

“You know, here and Texas are two tracks we were nervous about,” Keselowski said. “We were really fast all day; we just didn’t quite have enough there at the end. I feel like if we would have had the lead, we could have won, but it just wasn’t in the cards today.”

Kyle Busch rounded out the top-five.

“Any time you get back in the pack, it’s just so hard to pass and work your way up towards the front. Everybody is so equal, and with the dirty air, trying to get through some of that stuff is a challenge,” Busch said. “But any time we got up front, it seemed like our car was way different, way better, and had a better opportunity to run in the top-three, top-five. Even when we were on old tires earlier in the day, that was probably the best it was, and we held onto third, I think, for that run, there. I don’t know, just really cool to always have the M&Ms Halloween scheme this time of year. It’s really cool. Hope people go and download the Treat Town app on their device and have a happy Halloween. I appreciate M&Ms, Toyota, Interstate Batteries, Rheem, Stanley. We’ll be back next week.”

Logano led with Harvick in second throughout the final 40 laps of the 267-lap race.

Chase Elliott won the first 80-lap stage of the race after starting on the pole and leading 44 laps of the stage. He ran up front until a lap-25 caution, during which William Byron changed only two tires to get off pit road first.

When the race restarted, Byron was shuffled back through the field as Harvick and Elliott battled for the lead. Harvick took control of the position for awhile, until Elliott took his stage-winning lead on lap 64.

Denny Hamlin beat Elliott out of the pits during the caution that followed the opening stage and ran up front for most of the second 80-lap stage, leading 55 of the laps that made up the stage, for his own stage win.

Hamlin gave up the lead to pit under green on lap 125, as did most of the race field. Matt DiBenedetto, Ryan Newman and Corey LaJoie, though, stayed out and were able to pit under a caution that came for a Matt Kenseth incident on lap 144.

After the trio of drivers who stayed out under green pitted during the caution, Hamlin was back up front and held off a challenge from Harvick in the final laps of stage two.

The final stage of the race didn’t go as well for Hamlin. Inside the final 100 laps, he was forced into an unscheduled green-flag pit stop after right-side damage from contact with the wall resulted in a flat tire. He led 58 laps in the race before the incident.

Hamlin got back on the lead lap by staying out and taking a wave-around when lead-lap cars pitted during a caution that came out just before lap 200 when Kurt Busch’s engine blew.

“I haven’t seen an engine problem in years. No fault of anybody at Hendrick engines,” Busch said. “We’re running hard here. We were running top-five and there’s a ton of RPM down the front-straightaway with the tailwind. We were right in the mix. We were doing the deal. I just couldn’t quite clear some guys to get into that top-three or four and then our car would come back to us on the long run after about lap 30.

“It’s a shame for everybody at Chip Ganassi Racing. Having an engine failure in the playoffs – it’s just like a huge parachute that slows you up. We’ll pack that parachute up, throw it away, and we’ll go to Texas to win. We knew we were going to have to win either here or Texas. Martinsville we have a shot at it, too. The odds are stacked against us but, hey, we’re in the top-eight for a reason. I have a great crew chief, Matt McCall, and we’ll bounce back. Thanks to Monster, GEARWRENCH, Chevrolet. It’s just one of those things where you have an engine failure and there’s nothing we can do about it.”

Hamlin, then, got back on the same pit sequence with everyone else when the next caution came for Tyler Reddick with 46 laps remaining.

Harvick was the race leader when the caution came for Busch’s engine and continued to lead until Reddick’s caution, the final yellow flag of the race. But Logano beat him off pit road during the last yellow flag to take the lead that would end up being Logano’s race-winning lead.

“You gotta want it, man,” Logano said. “What an amazing team this Shell Pennzoil team is. I am worn out. I spent more time in the mirror than I did in the windshield, there. Pit stops got us positions and got us the lead. The 4 [Harvick] was fast, real fast, especially down the straightaways. I thought if I could hold him off the first 15 laps that I would have a chance. Dirty air was the best for us. As we caught lap traffic, I was able to gap ourselves as he got more dirty air, and I was able to draft somebody, because I was a little slow down the straightaway. Man, I am exhausted after that. We are going to Phoenix and racing for a championship again. Heck yeah!”