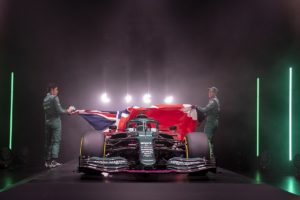 Having spent many years as Formula 1’s underdogs, the Silverstone-based team that now carries the majestic Aston Martin name is setting the foundations to break away from that label and become a bona fide front-running operation.

The goal of fighting for world titles may still be several years down the line but Aston Martin is not being coy about its ambition.

Aston Martin’s name bears a lot of weight in the automotive industry, and applying the same principle to its F1 sector is the next step in its trajectory.

For much of its 30-year history the Silverstone-based squad have been regarded as overachievers, claiming impressive results with the limited resources at its disposal.

Lawrence Stroll’s takeover in mid-2018, when Force India was on the brink of collapse, was not only essential but changed the dynamic at the team. Stroll’s intentions were clear early on, outlining that a new factory would be constructed at Silverstone after acquiring land adjacent to its current base. Under a year later, the Canadian took a significant stake in Aston Martin Lagonda, and declared the reintroduction of the luxurious sports car manufacturer to F1, who last entered a race in 1960.

“The team who designed and built our new Formula 1 car – the 500 men and women who conceive, manufacture, build and prepare our cars so that we can go racing at the pinnacle of global motorsport – has always punched above its weight,” Stroll said. “Now, as Aston Martin, it has the power with which to punch even harder.

“This is just the beginning. The team is pushing forward, and our ambitions are limitless. We now have the pieces in place, the people and the partners, to make real progress.”

Taking the next step and consistently competing at the front of the grid is no easy feat, given the large gap that currently exists between the front-runners and the mid-field pack. Aston Martin is not alone on the grid holding the ambition to creep up the pecking order. Having missed out on third place in the Constructors’ Championship to McLaren last year in an immensely close fight, another tight battle is expected this year.

“The midfield is ever increasing in competitiveness and getting much more difficult,” said Team Principal Otmar Szafanuer. “I can’t see Ferrari staying sixth forever, so they’ll be really difficult to beat this year and beyond. McLaren beat us last year into third, they’ll be difficult. Renault have the might of a manufacturer behind them as well. They are not going to be easy with Alonso coming in, a two-time world champion. So it will be very, very difficult for us to finish at the top of that midfield. It’s not going to be easy.”

But while every season is undeniably important, Aston Martin’s ultimate goal is to be at the front, which isn’t an overnight mission. Therefore, Szafnauer assured that the team isn’t simply concentrating on those who are behind it.

“We want to look at the guys that finished ahead of us and get closer to the Mercedes and Red Bull. We want to get closer to them as well. So the task is great but we are up for the challenge and we will work hard and do the best we can to achieve that.”

Racing Point managed to sign off its tenure on the grid with a race victory at Sakhir, courtesy of Sergio Perez, a world away from the team’s performance of early 2019.

“I think we are realistic, it’s a new start for us, there’s a lot of work for us ahead,” Vettel said. “The team is growing and I think the last year and this year is very exciting for the team, relaunching as Aston, and to be part of that, but also F1 is changing, bringing the budget cap, that’s all stuff coming our way if you compare to historically the big teams.

“It’s a journey that I think everyone is very excited to embark on but obviously we’re not expecting to arrive tomorrow – if we do, I don’t think anybody minds! But it’s not going to be that easy, so it’s a lot of work, but I think I’m looking forward to getting in the car, be myself, be happy, and have a good time, and if that’s the case the results will follow, whatever that means.”

Partnering Vettel will be Lance Stroll, who sees a completely different team to the one he joined prior to the start of 2019.

“A lot of the people are the same, and we’ve got some great additional people who have joined over the last couple of year and been a great help,” Stroll said. “We’ve evolved so much as a team since I came here in 2019. We were a team that was struggling financially and didn’t have the resources to build a perfect car in an ideal world with the group of talented people that we have.

“That’s changed, we have more sponsorship, better backing, Lawrence has done an incredible job putting a great team together at the factory in order to achieve what we want. Last year, we saw so much progress and hopefully we’ll see even more this year.

“The potential is there to really fight up at the front and challenge Red Bull, although I think Mercedes will be difficult as they’re very competitive they’ll be further up the road. But Red Bull and other the teams we were fighting last year – hopefully we can increase the gap to those.”

It’s less than three years since this team almost collapsed – which is undoubtedly a greater stress than carrying the branding of an iconic marque – but there is now expectation that Aston Martin will be a potent threat rather than a plucky underdog.

“We’re growing as a team, and for sure there are differences, and the team dynamic is changing,” Szafnauer said.

“As you grow, for sure the dynamics change, and they’ve got to be managed, but the DNA of the team hasn’t changed. We’re still that bunch of racers that we’ve always been. We still are driven by efficiency and punching above our weight.

“We have now and in the future will have even more weight, so hopefully that punch will be harder. But the DNA is the same. However, we’ve grown, and the dynamics have slightly changed.”