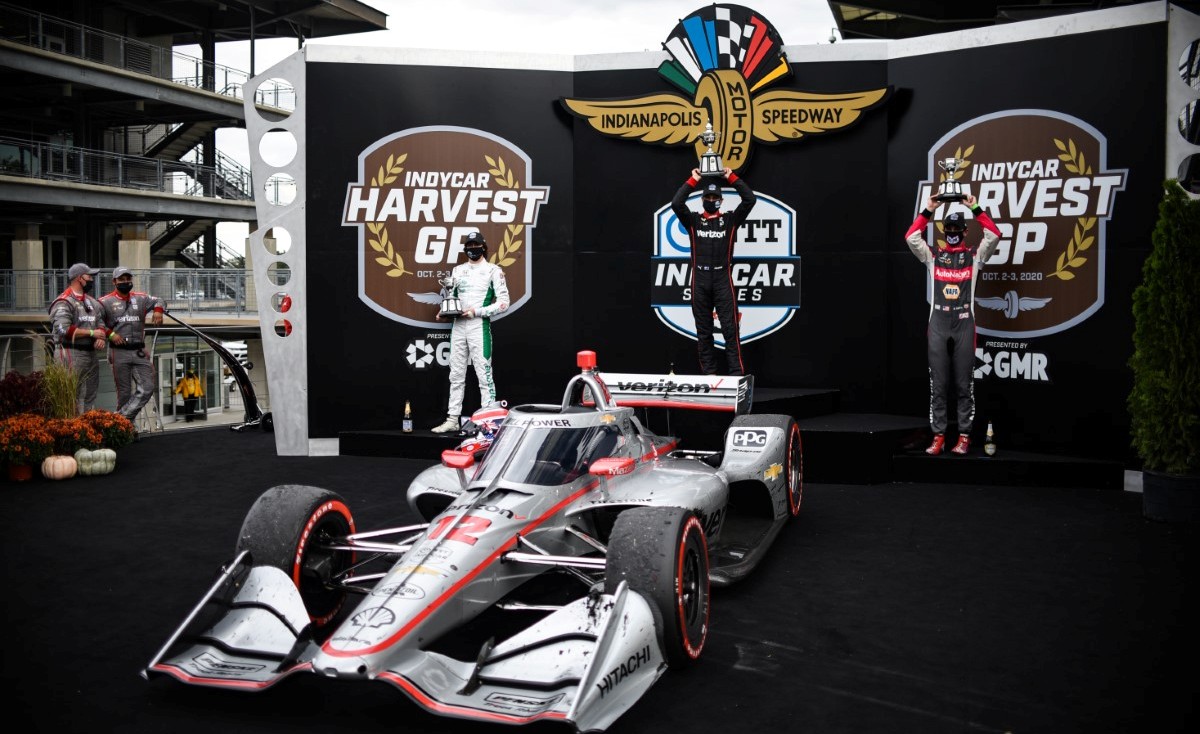 Team Penske’s Will Power held off a charge from Colton Herta in the final laps of the second Harvest Grand Prix race to claim his second win of the 2020 NTT IndyCar Series campaign at the Indianapolis Motor Speedway.

Power led all 75 laps of the race and looked to be out of reach for his rivals for most of the afternoon, however a late charge from Herta set up nail-biting final 10 laps.

The 2014 series champion utilised every ounce of his experience to fend off the 20-year old charger to claim a 39th career victory to tie him with Al Unser for fifth in all time IndyCar wins.

Herta had initially got by Andretti Autosport team-mate Alexander Rossi with 11 laps remaining and chased down Power with haste. Despite the clear pace advantage, his tires gave up near the end and he crossed the line just under a second behind the Australian.

Third-placed Rossi looked to be the initial challenger to Power in the final stint, but Herta on the scuffed Red Firestones had the pace to snatch away the second spot on the podium.

Newgarden pulled back more points on series points leader Scott Dixon as he recovered from a tough qualifying session to finish in fourth place after starting ninth.

Pato O’Ward had solid pace through the race for Arrow McLaren SP as he ran with the leading pack in the opening laps, the Mexican would eventually come to hunt down Newgarden in the latter stages but had to settle for fifth.

Jack Harvey led a solitary race in sixth with another solid outing for Meyer Shank Racing, managing to maintain a safe gap to Graham Rahal behind in seventh.

Five-time series champion Dixon made the most of yet another difficult afternoon at the Brickyard. Having started 15th, the Kiwi had plenty of work to do to shadow Newgarden through the field.

However, his job became a lot harder after tangling Ryan Hunter-Reay in the opening laps, leaving a hole in the floor of the No.9 PNC Bank Honda.

Going to the season finale in St.Petersburg, the gap to Newgarden is 32 points meaning a top nine finish in Florida would guarantee a sixth title for Dixon regardless of what Newgarden can do.

Alex Palou had a difficult afternoon in his No.55 Dale Coyne Team Goh entry after starting fourth, the Spaniard slipped back to ninth at the chequered flag having started in fourth.

Simon Pagenaud would round out the top 10 to ensure all three Penske cars finish the race on the track owned by ‘The Captain’, taking the fastest lap of the race for good measure.

The final race of the season at the Firestone Grand Prix of St.Petersburg will crown another championship for either Dixon or Newgarden on October 25.