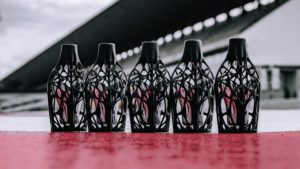 Formula 1 has launched a range of five perfumes that aims “to take fans on a sensory journey through a thrilling race”, and will retail from today (Monday).

The fragrances, created in conjunction with Designer Parfums, are contained inside a 3D-printed exoskeleton structure, meant to resemble a Formula 1 chassis, and will retail at £195 for a 75ml bottle.

According to a release from Formula 1 Precious Mettle is a “fresh, intense, woody fragrance with a metallic twist that represents the courageousness required from drivers as they line up on the grid.”

“Turn 1 is an avantgarde composition, with inimitable accords of burning rubber and rain on salty asphalt, honouring the performance and determination of powering through the first corner.”

Overtake 320 is named as a nod to the maximum speed in kilometres of Formula 1 machinery and is “a warm and spicy composition that races with a fiery blend of cinnamon and bergamot.”

Neeeum White is “a tribute to the fearlessness of F1 heroes as they reach the final straight; a confident fragrance with a daring cocktail of spices, contrasting hot black pepper with the coolness of juniper.”

Meanwhile Carbon Reign has been created to “replicate the sense of victory” and “captures a vibrant and energetic scent built around a champagne accord, dry amber and woods.”

“We are very excited to be unveiling the second instalment in our exclusive fragrance collection with Designer Parfums,” said Director of Marketing and Communication Ellie Norman.

“Following the successful launch in Abu Dhabi last year we are thrilled to see the collection become available in Europe and engage with our fans through the important touch point of smell.

“The unique and daring fragrance collection embodies the sport and has been crafted to take fans on an F1 journey.”