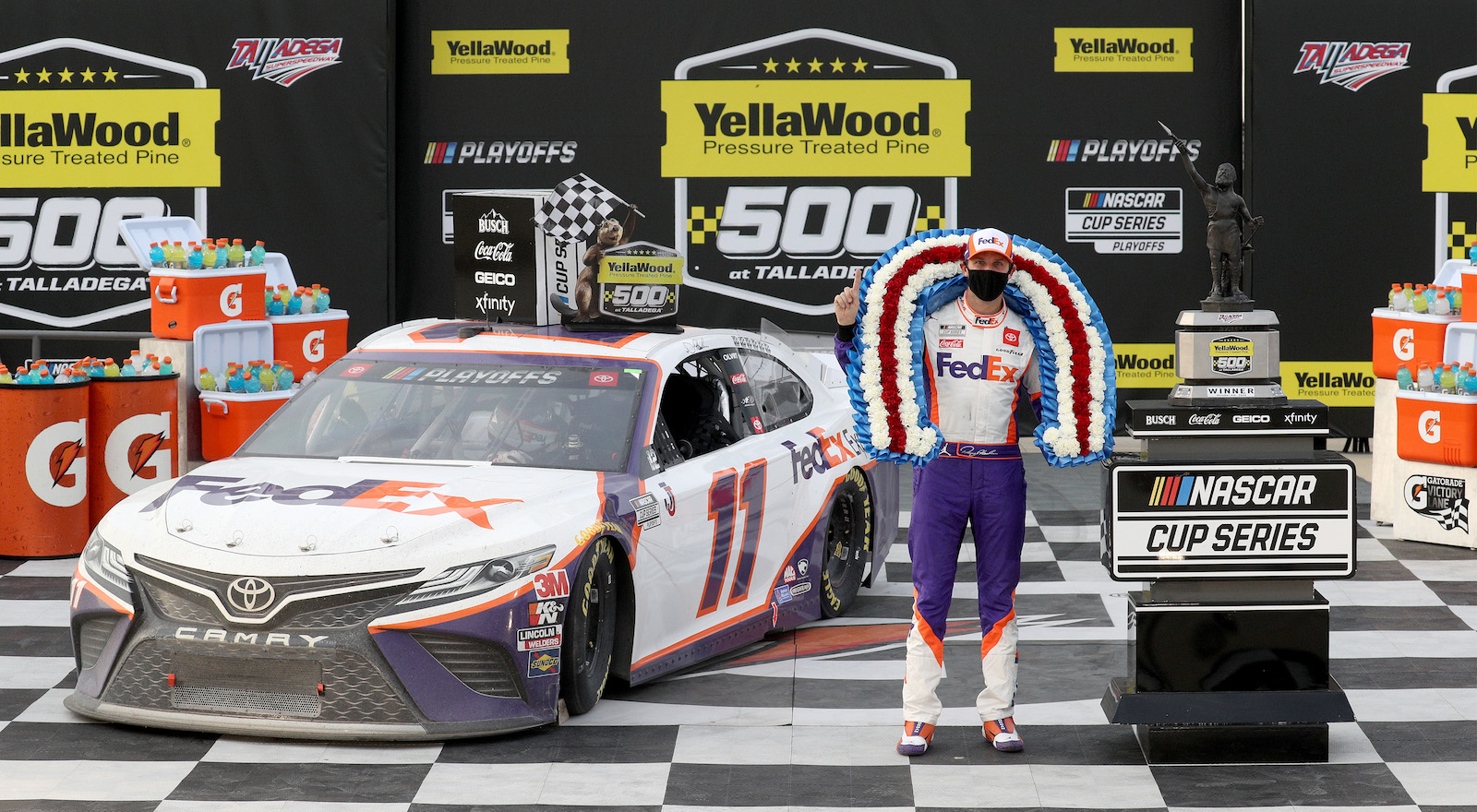 Denny Hamlin claimed his seventh win of the 2020 NASCAR Cup Series season and secured advancement to the third round of the playoffs Sunday in the YellaWood 500 at Talladega Superspeedway.

Hamlin took the checkered flag 0.23 seconds ahead of Matt DiBenedetto, who was the race leader for a third and final overtime restart. DiBenedetto, though, wound up with a 21st-place finish because of a penalty for forcing William Byron below the yellow “out of bounds” line as the frontrunners approached the checkered flag. At first, Elliott also was penalized for going below the yellow line on the final lap and was credited with a 22nd-place finish, the final position on the lead lap. NASCAR later rescinded Elliott’s penalty, though, awarding him a fifth-place finish after determining he was forced below the line by Chris Buescher. Buescher, as a result, was moved to the back of the lead lap for a 22nd-place finish.

“A lot of stuff happened, for sure,” Hamlin said. “I don’t know if the 21 [DiBenedetto] was running out of gas, but they, obviously, got shuffled there. They were crashing up top. I think the 20 [Erik Jones] hit the wall and then started coming back down, which forced, I think, me and the 24 [Byron] down to the apron. Just was able to overcome. This is one of those that you don’t plan on winning, but we got away with one today.”

Hamlin also went below the yellow line on the final lap but was allowed to keep his win, as NASCAR ruled he moved down to avoid Byron.

“They were crashing in front of us,” Hamlin said. “Obviously, I got forced down there, just like the 21 [DiBenedetto] and others did. There were a bunch of us that all crashed down there.”

Erik Jones was the race runner-up, with Ty Dillon and Byron in third and fourth.

The yellow flag waved a track-record 13 times. For much of the race, Hamlin utilized a strategy of running in the back to avoid the carnage. He was up to fourth by the record 13th caution caution that sent the race into its third overtime. He was second, next to DiBenedetto on the front row, for the final restart, though, after opting to stay out while some other lead-lap cars pitted.

“Just a lot of attrition,”Hamlin said. “We just played the strategy and the numbers game to run in the back until we were locked in. Just things worked out. We finally got one back. This one was unexpected to say the least, but proud of this whole FedEx team, Toyota and everyone at JGR for bringing great race cars. Today we’re obviously thinking about J.J. Damato [JGR executive] and his two kids. Really excited about this win. This was unexpected for sure.”

Several cars on the lead lap pitted during one of the three final cautions, as the extra laps turned the 188-lap scheduled distance into a 200-lap fuel-mileage race.

Joey Logano, who led a race-high 45 laps, led one of the drafting lines of traffic through most of the final stage that began after lap 120. After taking the lead on lap 137, he traded leads with drivers including Team Penske teammate Brad Keselowski, Elliott and Darrell “Bubba” Wallace Jr. Logano was the leader when the 11th caution of the race came on lap 183 for a James Davison incident, sending the race into its first overtime and was the leader for the first overtime of the race. But he was among the drivers collected in the 12th caution of the race that sent the race into its second overtime.

Buescher won the first 60-lap stage of the race under caution, inheriting the lead when previous leader Aric Almirola was turned while attempting to block Alex Bowman on lap 58. The contact resulted in a multi-car crash that also involved Kyle Busch, Ryan Blaney and Austin Dillon.

“I’m okay. I, honestly, haven’t seen the replay, so it’s hard to say, but I got hit from behind and turned in the outside fence,” Almirola said. ”It’s such a shame. We had such a fast Smithfield Power Bites Ford Mustang. I’m just disappointed. We were doing everything we needed to do. We were closing in to the end of stage one, and it looked like we were gonna score a lot of points, there, which is exactly what we needed to do. It looks like he [Bowman] got to my outside, and my car started to turn to the right, so it’s unfortunate. I don’t know if he got in the back of me and hooked me or how that played out, but my car just made a hard right into the fence. It’s unfortunate. I had a lot of confidence going into today. I thought we were gonna have a good shot to win. Our car was so fast, but unfortunately, the good Lord had different plans for us today. We’ll go onto the Roval and try one more time.”

The caution in the closing laps was the fifth caution of the race, those first five cautions also including a lap-25 competition caution. Before the competition caution, pole sitter Hamlin had led all but two of the first 25 laps, Logano leading the other two.

The competition caution was the fourth yellow flag, setting a record for most cautions in the first 25 laps of a Cup Series race at Talladega. The yellow flag began waving early, with the first caution coming on the opening lap for a Christopher Bell spin.

While Hamlin dominated before the competition caution, several drivers ran up front in the second half of the first stage. Almirola was first off pit road during the competition caution. He and Ryan Blaney, then, traded the lead back and forth. Next, the top position was jockeyed between Jones and Blaney before Blaney’s Team Penske teammate Logano took over challenging Jones up front.

Chase Elliott, then, took over the lead on lap 52 after overcoming a speeding penalty during the competition caution, but he led only three laps before Almorola reassumed the lead on lap 55.

Martin Truex Jr. won the second stage at lap 120. Elliott led nearly half of the second 60-lap stage, 28 laps to be exact, but was back to fourth by the end of the stage.

Aside from Elliott, Keselowski, Buescher and Jones also led laps before a big crash involving at least 10 cars on lap 109. The wreck started with Clint Bowyer making contact with Jimmie Johnson, attempting to draft.

“You’ve got to go,” Bowyer said. “You’ve got to push him. The 22 [Logano] and the 21 [DiBenedetto] were trying, and obviously, they gave up on it for some reason. As soon as I got to him [Johnson], I push him in the front, and the whole rear of the car went down, and I was like, ‘Oh my God,’ and before I know it, he was tank swapping all over the place. I don’t know if that was how they had their cars built or whatever, but as soon as you got close to him, he was all over the place. Obviously, didn’t mean to wreck him, but you’re going hard and three-wide, and people are behind you pushing. I was hoping he would save it, but he didn’t, and we all wrecked.”

“It was a wild ride,” Kurt Busch said. “That’s the nature of this sport. You’re on top one week with a win, and everything’s fantastic. And then, this week here at Talladega, we were hoping for a nice, smooth run and to gain some points. I was just doing my job as a Chevy helper running top-five, and next thing you know, I’m going for one of the wildest rides I’ve ever been in.”

Elliott was the race leader following a red flag for track cleanup. Logano and Tyler Reddick also led laps before Truex took his stage winning lead on lap 119. Logano, though, was penalized for late in the stage for forcing another car below the yellow line.