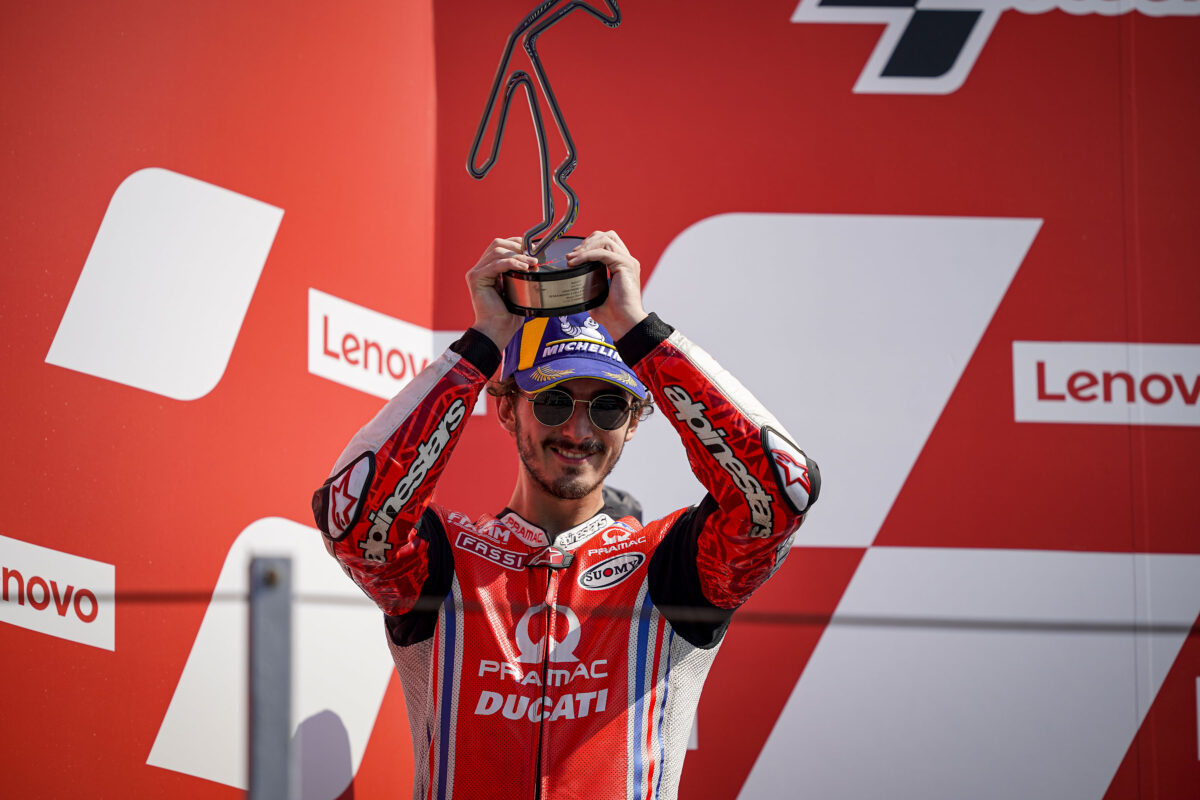 Bagnaia has been in a battle with Avintia MotoGP racer Johann Zarco to secure the vacant Ducati berth since Andrea Dovizioso announced his exit from the team at the Austrian Grand Prix last month.

The ’18 Moto2 world champion has impressed for official satellite Ducati squad Pramac in his sophomore campaign this year following a subdued debut season in ’19, the Italian robbed of a first rostrum appearance in the Andalucian GP at Jerez after suffering an engine failure while running second in the closing laps.

After missing three races due to a knee injury sustained in first practice for the Czech GP, Bagnaia returned with a bang to secure his first podium thanks to a strong ride to the runners-up position at the San Marino GP, before leading most of the subsequent week’s Emilia Romagna contest, although crashed out late on.

Ducati made clear after preliminary talks with ’17 and ’18 pilot Jorge Lorenzo broke down that they would be focussing on hiring a younger challenger to complete its ’21 line-up, with Bagnaia’s recent strong performances deciding that he got the nod over Zarco.

“My MotoGP debut was not easy, but at Ducati, they never questioned me: they gave me all the support and confidence that a rookie needs and they let me do experience in 2019,” said Bagnaia.

“I listened to them, I trusted them, together we learned to know each other and understand each other, and now we form a great team.

“They taught me a method of work that allowed us to take away some nice satisfactions and I think that’s just the beginning.

“Today I am the happiest person in the world, for me, it is a dream come true: being an official Ducati rider has always been my ambition, and I succeeded together with all of those who had always believed in me even when things did not go well.”

The Frenchman-who secured an impressive pole and podium finish at the Czech event on his year-old GP19 machine-won’t be left empty handed though as he secures one of the empty seats at Pramac, with a full-fat factory supported Desmosedici GP21 to boot.

Joining him will be current KTM-affiliated Moto2 racer Jorge Martin, the ’17 Moto3 world champion deciding to defect from the Austrian manufacturer to chase his premier class dream with Ducati.

“Jack Miller and Pecco Bagnaia have shown this year that they can take advantage of the potential of our Desmosedici GP bike and have earned this opportunity,” added Ducati CEO Claudio Domenicali.

“Their transition to the official team from the Pramac Racing Team, where they both grew up, is proof of the efficient collaboration that binds us to the team of Paolo Campinoti, which I would like to thank.

“I am sure that next year his team will be able to make the most of the talent of the two new riders Johann Zarco and Jorge Martín.”

Enea Bastianini-who is battling for the ’20 Moto2 championship-looks to be heading to Avintia to replace Zarco, most likely on a GP20 after he confirmed several weeks ago that he had secured a move into the premier class with Ducati.

His team-mate looks to be between either the incumbent Esteve Rabat-who has first dibs on the seat due to the funding he brings to the team-or intermediate class points leader Luca Marini, who has reportedly held talks with both Avintia and Ducati alongside half-brother Valentino Rossi.