Alpine A521 to debut at Silverstone filming day 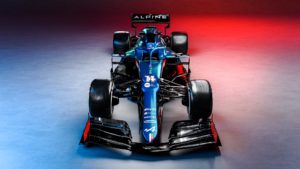 Alpine’s new-look Formula 1 car, the A521, will hit the track for the first time on Wednesday as part of a filming day.

Alpine, which operated as Renault from 2016 through 2020, unveiled its overhauled look on Tuesday, displaying a metallic blue, red and white car, named the A521.

Esteban Ocon will rack up the car’s first laps at Silverstone on Wednesday.

Conversely reigning World Champions Mercedes have opted against running a shakedown prior to the pre-season test in Bahrain.

Mercedes will instead use one of its filming days on March 16, in between testing and the opening round, at the Bahrain International Circuit.

Mercedes won’t yet ‘flirt’ with other drivers for 2022
Technical Insight: A complete analysis of the launch-spec Mercedes W12