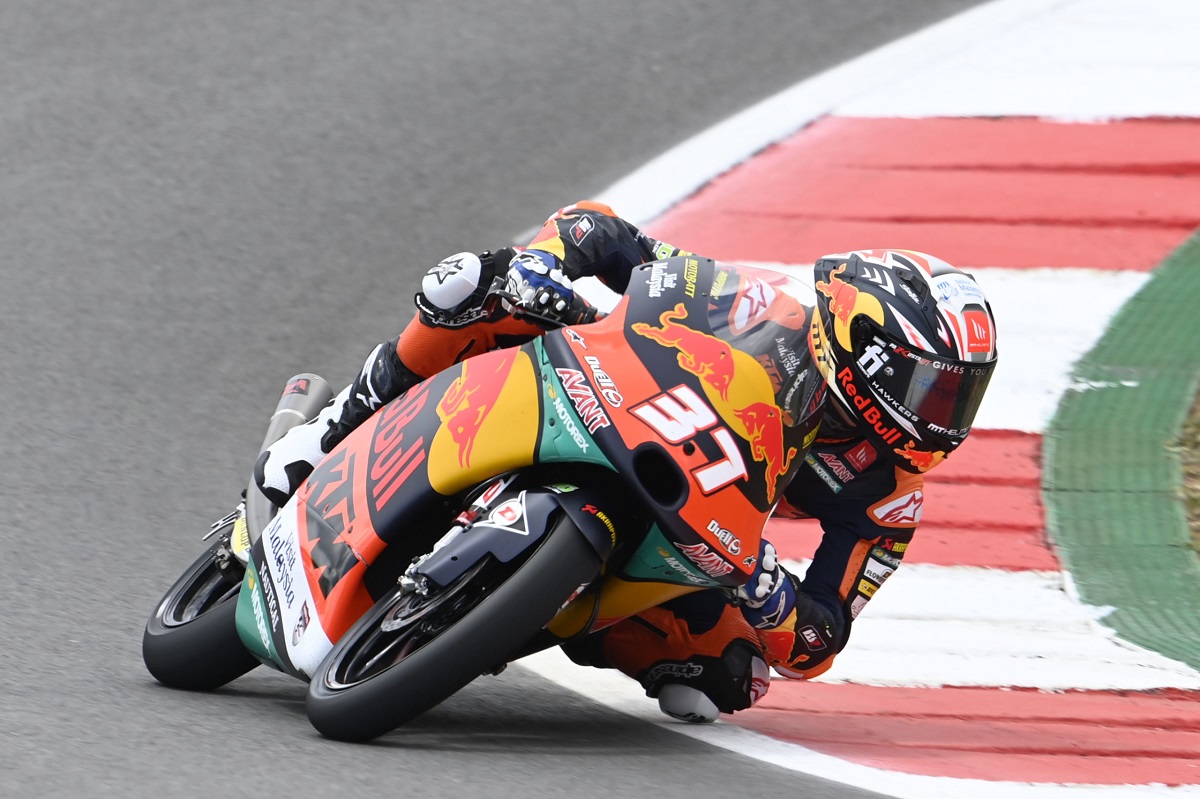 Pedro Acosta secured a second straight Moto3 victory as he passed Dennis Foggia on the final lap of the Portuguese Grand Prix to win by just 0.051s.

Acosta rode a race with guile far beyond his 16 years of age, the KTM Ajo man remaining firmly within the top three across pretty much the entirety of the 21 lap sprint despite starting 12th.

Long-time leader Dennis Foggia looked to have the measure of the field during the encounter as he was able to use his small advantage in the high-speed corners to pull out enough of a gap to hold the lead down the Algarve International Circuit’s 1km pit straight.

Acosta remained firmly entrenched onto the rear of Foggia’s Leopard Racing Honda throughout though as he looked to extend his series lead, finally electing to attack as the leading group of nine riders began their final tour.

He had a look down the inside at Turn 3 but just failed to make the grade thanks to a late-braking Foggia, the Italian soon using his pace in the fast bends to pull out a small advantage on Acosta.

Determined to grab a second career win Acosta used every ounce of grip left within his Dunlop tyres to move within range of Foggia heading into the tight Turn 13, the Spaniard firing down the inside with a well-measured attempt that saw him secure himself in the lead.

He nearly gave it all away as the front of his KTM bobbled through the final long right hand turn, but he ultimately clung on to secure supremacy by just 0.051 over Foggia.

Pole-man Andrea Migno looked to make it a three-way tussle for victory in the closing few laps, but ultimately failed to possess enough speed to make it happen and thus had to settle for the final podium spot.

Ayumu Sasaki grabbed fourth on his Tech 3-run KTM ahead of Gabriel Rodrigo-who had to serve a long-lap punishment after taking out Xavier Artigas early on-while Niccollo Antonelli was sixth.

Romano Fenati came home seventh ahead of Sergio Garcia, the Gas Gas pilot slipping back over the final tour after running within the top four for most of the contest, while Jaume Masia and Ryusei Yamanaka completed the top ten.

Masia had established himself in third at the start of the final tour, but lost the front as he sailed his KTM into Turn 5.

He was able to remount his machine swiftly and only crossed the line 12.5 seconds after his victorious team-mate.

Jeremy Alcoba recovered well to score two points in 14th after making a pit-lane start due to fighting with John McPhee in the Doha GP, the Scotsman not able to fight back so well with his larger start delay as he took 23rd-leaving him pointless after three races.

Acosta’s win sees him extend his championship lead to a formidable 31 points after just three races ahead of team-mate Masia, with Darryn Binder-who failed to score after also starting from pit lane-and Antonelli level on points a further three back.