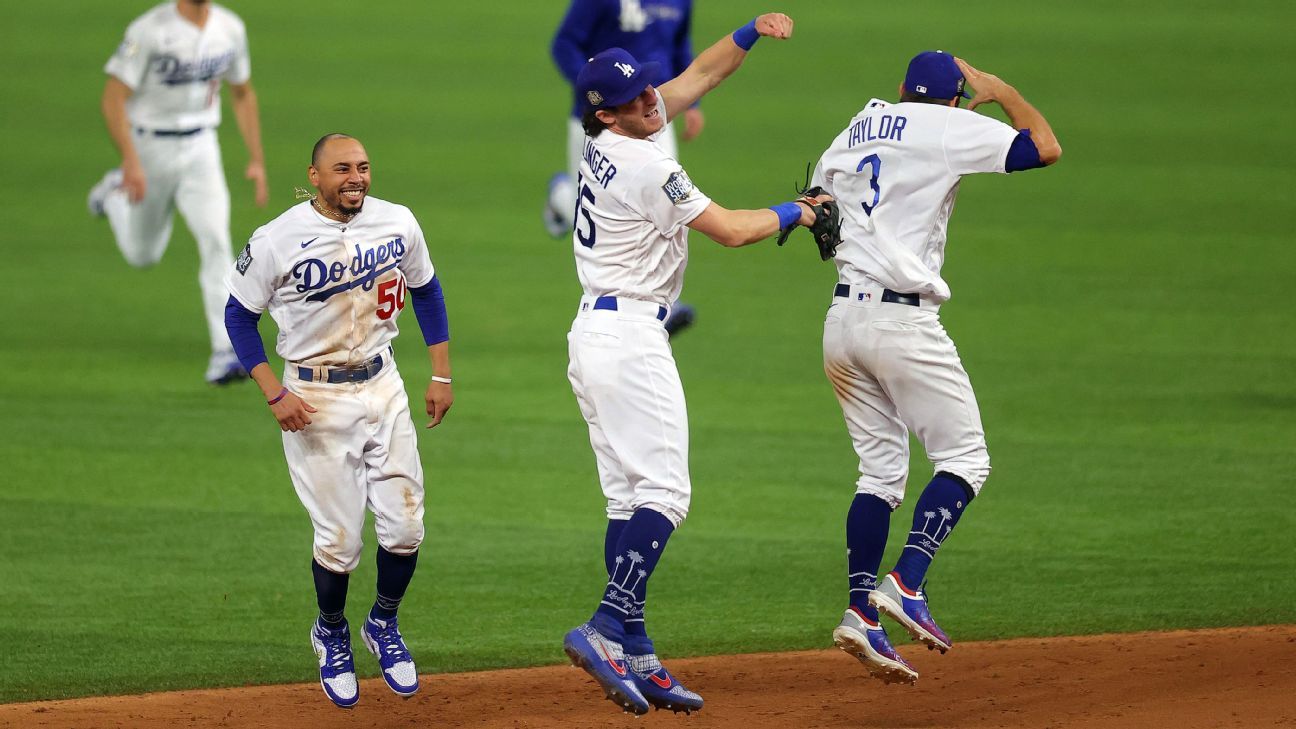 ARLINGTON, Texas — They might have gotten a little help from the opposing manager in Game 6, but the Los Angeles Dodgers finally won their World Series, the first for the franchise since 1988 and the first in three tries for them over the past four years.

The Dodgers beat the Tampa Bay Rays 3-1 on Tuesday night at Globe Life Field behind a stellar effort from their bullpen, with six relievers combining for a 7⅓ scoreless innings after starter Tony Gonsolin gave up a solo home run to Rays rookie sensation Randy Arozarena in the first. L.A. won the series 4-2.

Corey Seager achieved a rare October double, becoming Most Valuable Player of the World Series after earning the honor for the National League Championship Series. Just as Orel Hershiser did when the Dodgers won their previous World Series title in 1988.

“That’s things you think about when you’re a kid,” Seager said of being called World Series champion. “You wonder what it’s like, you strive to hear that, and to do it with this team and this group — it couldn’t be any more special.”

The Dodgers trailed early in Game 6 and were doing very little on offense until the sixth inning when Rays manager Kevin Cash inexplicably pulled starter Blake Snell while the left-hander was pitching a gem. Snell had struck out nine batters while giving up two hits, including one to Austin Barnes before being pulled. Reliever Nick Anderson came into the game and immediately gave up a double to Mookie Betts, a run-scoring wild pitch and a run-scoring groundout, erasing the deficit and giving the Dodgers their first lead of the game.

“I’m not exactly sure why,” Betts said when asked about the decision to remove Snell. “I’m not going to ask any questions. He was pitching a great game.”

Arozarena’s homer was his 10th of this postseason, but it wasn’t enough for the Rays, who managed only four hits the rest of the game. The Dodgers also had five hits on the night, including a home run by Betts in the eighth inning to extend the Dodgers’ lead.

Julio Urias pitched the final 2⅓ innings for the save.

It’s the seventh championship for the Dodgers, who have won their division for eight consecutive years. The Dodgers posted the best record in the majors during this pandemic-shortened season. They had a scare against the Atlanta Braves in the National League Championship Series, going down 3-1 in the series before winning three straight games to capture the NL pennant.

Longtime Dodgers broadcasting legend Vin Scully, who retired in 2016 following a 67-year career, tweeted his congratulations to the team.

Seager batted .400 with two homers, five RBIs and six walks against the Rays, including a sixth-inning grounder that allowed Betts to speed home from third base with the go-ahead run. The star shortstop jumped into the arms of second baseman Kiké Hernandez after Urias struck out Willy Adames to clinch the championship.

Seager hit .310 with five homers and 11 RBIs in the Dodgers’ seven-game win over Atlanta in the NLCS, including three homers as the Dodgers fought off elimination in Games 5 and 6. He drove in runs in five consecutive plate appearances, starting with his last two at-bats in Game 2, matching a feat that had been accomplished only by the Houston Astros‘ Carlos Beltran in 2004.

“It was absolutely phenomenal. This team was incredible,” Seager said. “We never stopped. We were ready to go as soon as the bell was called. Once it did, we kept rolling. You can’t say enough about what we did this season.”

The previous MVP of both a League Championship Series and the World Series in the same year was San Francisco pitcher Madison Bumgarner in 2014. Only eight players have done it — all National Leaguers.

Los Angeles had come up short in the World Series twice in the previous three years. Betts was on the other side two years ago and homered in the clinching Game 5 for the Boston Red Sox, who before this season traded the 2018 AL MVP to the Dodgers. In July, Los Angeles gave him a $365 million, 12-year extension that goes until he turns 40 in 2032.

“I just came to be a part of it. I’m just happy I could contribute,” Betts said.

The Rays have played in two World Series, this season and in 2008, losing both times.

Los Angeles manager Dave Roberts did what his seven predecessors — including Joe Torre and Don Mattingly — failed to do: bring a championship to long-starved Dodgers fans. He joins Hall of Famers Walter Alston and Tom Lasorda as the only managers to do so.

An emotional Roberts shared hugs with his players after the final out.

“This is our year!” Roberts shouted, drawing huge cheers from about 11,000 fans in Texas.

He has taken the Dodgers to the playoffs in each of his five seasons, but they never reached their ultimate goal, and Roberts endured his share of criticism along the way.

Roberts got booed in Game 5 by the few fans allowed at Globe Life Field.

The mostly pro-L.A. crowd didn’t want Clayton Kershaw to leave the game so soon, but Roberts stuck to his pregame plan. He wanted his veteran ace to face 20 or so batters (he faced 21) and turn it over to the bullpen. Kershaw left after getting the first two outs of the sixth. The Dodgers went on to win 4-2.

After closing out the Rays, Roberts thanked two people who weren’t in Texas: former pitching coach Rick Honeycutt and pitcher Ross Stripling, who was traded to Toronto in late August.

Roberts also singled out Kershaw and closer Kenley Jansen, who struggled this season.

Kershaw was equally happy for Roberts. “It’s not easy to be manager,” the pitcher said. “There are so many behind-the-scenes people who put us in position to succeed and he’s at the top of that food chain.”

Kershaw became only the third starting pitcher to earn two wins and strike out at least one-third of the batters he faced in a single World Series, joining Bob Gibson and Sandy Koufax.

He’s the first pitcher to do so on a winning team and not win World Series MVP.

“I’ve been saying, ‘World Series Champs’ in my head, over and over again, just to see if it will sink in,” Kershaw said. “I’m just so very thankful to be a part of this group of guys, and so very thankful that we get to be on the team that is bringing back a World Series to the Dodgers fans after 32 years. They’ve waited a long time, and to get to do that … you couldn’t ask for anything more, it’s incredible.”

About 2½ weeks after the Lakers won the NBA title while finishing their season in the NBA bubble in Orlando, Florida, the Dodgers gave Los Angeles another championship in this year when the coronavirus pandemic has delayed, shortened and moved around sports seasons.

“Man can we PLEASE have a parade!!!” Lakers star LeBron James tweeted. “I know I know we can’t but DAMN I wanna celebrate with our @Lakers & @Dodgers fans!!! LA is the city of CHAMPIONS”

ESPN Stats & Information and The Associated Press contributed to this report.