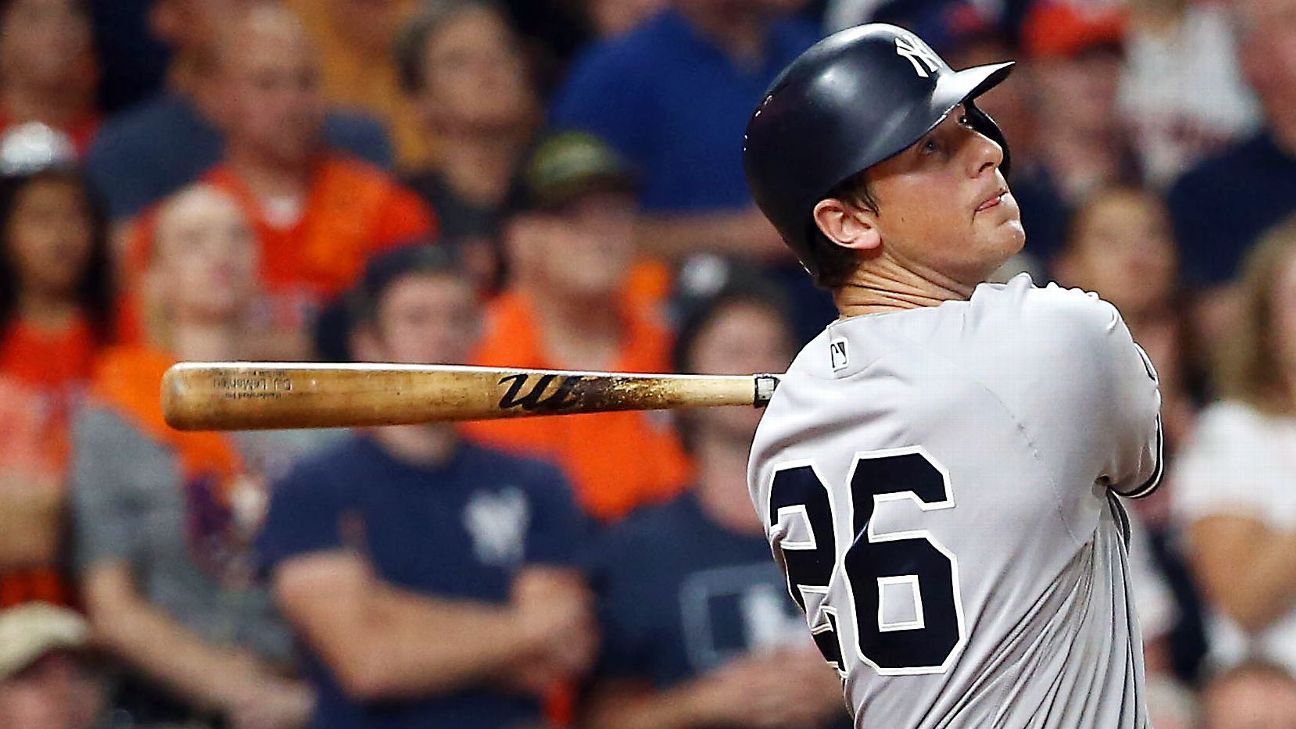 NEW YORK — DJ LeMahieu is on the verge of a first in more than a century of Major League Baseball: the first player to win undisputed batting titles in both the American and National Leagues.

Luke Voit is about to become a more common name atop the leaderboards but part of an illustrious list, joining Babe Ruth, Lou Gehrig, Joe DiMaggio, Mickey Mantle, Roger Maris and Alex Rodriguez as New York Yankees to top the majors in home runs.

“I’ve always admired the Babe,” Voit said after the Yankees woke up from their latest slump to beat the Miami Marlins 11-4 on Saturday and kept their hold on the AL’s No. 5 postseason seed going into the final day. “It’s just awesome company. That guy hit 700 home runs (714 to be exact). That means I got to start hitting like 150 a year to catch up to him. So that’s never going to happen.”

LeMahieu had his fourth four-hit game and three RBIs while raising his average to .359. He passed Washington’s Juan Soto (.346) for the big league lead and opened a large margin over defending AL batting champion Tim Anderson of the White Sox, second in the AL at .337.

“This game’s been around for a long time, and I think anyone who’s watched knows just how special a player DJ LeMahieu’s been for us in these two years,” Yankees manager Aaron Boone said.

LeMahieu won the 2016 NL batting title with a .348 average for Colorado. Ed Delahanty hit .410 for the Philadelphia Phillies to win the NL championship in 1899; he is credited by some researchers with the 1902 AL championship at .376, while others accept Nap Lajoie as winning that title at .378 despite lacking the plate appearances required in more modern times.

“Guys don’t win batting titles in both leagues, because you win it in one league, they probably keep you,” said Marlins manager Don Mattingly, the 1984 AL batting champion with the Yankees. “It’s a different game nowadays.”

A 32-year-old infielder in his second season with the Yankees, LeMahieu will become New York’s first batting champion since Bernie Williams in 1998.

Voit hit a three-run drive against Nick Vincent in a seven-run sixth for a 10-3 lead. He has made 38 consecutive starts, including 19 straight at first base, despite an injured foot.

“I’ve been trying to transform myself into a better power hitter and this year was another steppingstone for me,” Voit said. “I’ve always been a guy, high school, college, minors. I play through stuff. I’m a grinder. I want to be out there. I want to help a team, especially when we were hurting earlier in the year and I had to do whatever it took to be out there. So I was making sure I was getting plenty of treatment from all of our trainers and trying to stay on top of it so I could play through it and not be like killing me.”

Yankees rookie Deivi Garcia (3-2) allowed four runs and seven hits in 6⅔ innings with seven strikeouts and a walk. Boone has not announced whether Garcia or left-hander J.A. Happ will follow Gerrit Cole and Masahiro Tanaka as his playoff starters.

Preparing for a first-round playoff series on the road, likely at Cleveland or Tampa Bay, the Yankees (33-26) are trying to hold off third-place Toronto (32-27) and keep the No. 5 seed. New York’s season has flowed and drifted like the tide: a 16-6 start, following by a 5-15 slide, a 10-game winning streak and five losses in a six-game span coming in.

Wade’s homer off the second deck in right ended the Yankees’ first five-game homerless streak since April 1-5, 2014. They have scored nearly half their runs via the long ball, 156 of 315, according to the Elias Sports Bureau.

“Any spark to get us going, especially with the last game coming up tomorrow and going to the playoffs,” Wade said after his third homer this season.

Giancarlo Stanton was in a 1-for-21 slide with 12 strikeouts before his 113-mph RBI double to the left-center gap in the fifth that drove in Aaron Judge with the tying run.

“I feel like we’re always one swing away,” Voit said. “We just need to get that one to get us going.”