How can the Padres take the next step and push past the Dodgers?

There is little denying the San Diego Padres took a significant step forward in 2020, not only reaching the postseason for the first time in 14 years but grabbing national headlines for their youthful and enthusiastic style of play, displaying an exuberance rarely seen in today’s game. They were arguably the most fun club to watch last season.

But the Padres’ season ended at the hands of the best club in baseball, the Los Angeles Dodgers, who also ended the seasons of the Milwaukee Brewers, Atlanta Braves and Tampa Bay Rays. The Dodgers are Major League Baseball’s benchmark, having reached the World Series in three of the past four years, finally winning it all in 2020. The quest for every team, particularly in the National League, is simple: Find a way to beat the Dodgers.

But here’s another thought: You might not have to design a plan to beat the Dodgers and overcome their incredible talent and massive payroll over the course of a grueling 162-game regular season, but rather devise a blueprint to take your best shot in a five- or seven-game postseason series. It’s a formula other clubs have successfully drawn up against rival juggernauts in recent years.

The Marlins had a front-row seat in the mid-1990s to watch the Braves dominate the NL. Their design was to devise a way to knock off the Braves in a short October series. Entering the 1997 season, Atlanta had been to four of the previous five World Series.

“We knew to get farther, we would have to get through the Braves,” said Jim Leyland, manager of the ’97 Marlins. “We knew our only chance was if we could handle those guys. We felt like we were as good as anybody. We didn’t win the division, but we were pretty well-equipped going into the postseason.”

Likewise, the Boston Red Sox of the early 2000s joked about having to face the Evil Empire, also known as the New York Yankees, who reached the World Series six times in an eight-year span starting in 1996.

Each of those clubs devised a way to overcome what was viewed as a superior team when it mattered most, the postseason.

These Dodgers are what the Padres, like the rest of the league, must contend with. The Padres — like the 1997 Marlins with the Braves in the NL East and the 2004 Red Sox with the Yankees in the AL East — have an up-close view of the best club in the league since they share the same division as the era’s marquee franchise and are separated by only a two-hour drive.

Since he was a child, Fernando Tatis Jr. has lived to play. This year, the game needs him just as much as he needs it. Jeff Passan »

“I think you’re always cognizant of the teams in your division, the teams you’re going to have to beat if you’re going to win a pennant or a World Series,” Padres general manager A.J. Preller said. “But our focus in general is what’s right for us, what we think is going to win over the course of the long haul, over 162 games. It’s not just to get to the playoffs, but it’s to win a championship. The majority of that is not just with one team in mind.”

It’s important to distinguish that neither the ’97 Marlins nor the ’04 Red Sox entered the season having conceded the divisional race. Both teams built solid rosters that had them believing they were good enough to take down their rival. Despite finishing second to the Braves and Yankees, respectively, those Marlins (8-4 against the Braves during the regular season) and Red Sox (11-8 vs. the Yankees) were better head-to-head against their rivals.

“For us, it was more of a decision of let’s get into the playoffs and then we’ll take care of it once we’re in,” Alan Embree, a key member of the 2004 Red Sox bullpen, said of how the Sox viewed the Yankees. “You have a collection of your favorites and your underdogs. As underdogs, we tended to believe in ourselves, that we weren’t going to back down from anybody or be afraid of anybody. Every time we faced the Yankees, it was like a heavyweight title fight. But we knew they weren’t better than us.”

The Padres are in a similar situation. They never appeared in awe of the Dodgers during the 2020 season or even while being swept in the NL Division Series, when the Padres were severely handicapped because of injuries to their top two starters, Mike Clevinger and Dinelson Lamet. 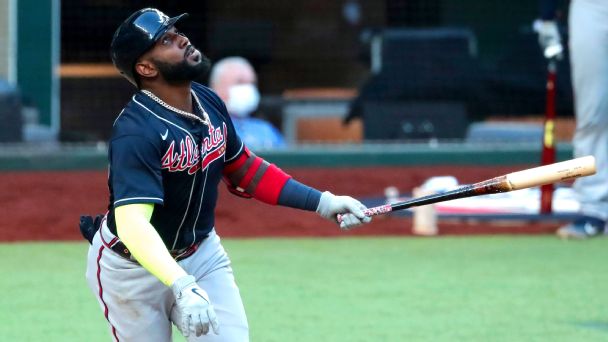 With the unique 2020 season behind us, it’s time to turn our attention to the hot stove season. Free agency, trade talk, offseason news &»

The Padres must design a plan to slay the NL West kingpins. In doing so, they must devise a way to exploit the Dodgers’ weaknesses, which are not easy to expose. One potential trouble spot is facing left-handed pitchers. In 2020, the Dodgers were a league-best 27-9 against right-handed starters while going 16-8 versus lefties. That was still good enough for fourth in the league, but if you’re looking for an opening, this might be one of the few to find against L.A. Of the Dodgers’ five postseason losses this year, three came when facing a lefty starter.

Left-hander Blake Snell was carving up the Dodgers lineup in Game 6 of the World Series before he was surprisingly lifted in the sixth inning. It underscores that a quality lefty can have success against the Dodgers. There is talk that Snell, a former Cy Young Award winner, might be available via trade, and the Padres snagging him would make perfect sense. San Diego has a loaded minor league system and could be a trade partner with most anyone. Jose Quintana, a free agent, is also an available lefty.

This might be where the Padres should focus their attention. High draft picks MacKenzie Gore (third overall in 2017) and Ryan Weathers (seventh in 2018), along with young flamethrower Adrian Morejon, all are left-handers and could very well be part of the puzzle to toppling the Dodgers. But Gore and Weathers have never pitched in a big league regular season game, and Morejon has limited major league experience.

Even with the Dodgers’ strong pitching, the Padres should have plenty of offense to make a go of it in any short series. Manny Machado, Fernando Tatis, Eric Hosmer and Wil Myers highlight a strong middle of the order. The clubs are scheduled to play each other 19 times in 2020, giving the Padres a good, strong look at what they would be up against should they meet again in the postseason.

The Padres saw an opening against the Dodgers this season and used a similar path that the 2004 Red Sox did when then-general manager Theo Epstein bolstered his club with the trade-deadline acquisitions of shortstop Orlando Cabrera and first baseman Doug Mientkiewicz, each a Gold Glove winner. This was because Epstein recognized that a likely showdown with the Yankees would require eliminating giving up extra outs. 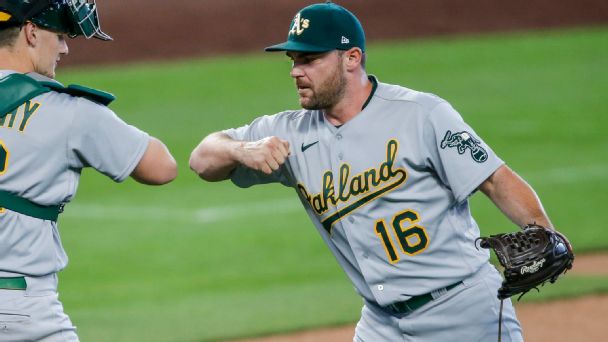 Who is ready to pounce on Liam Hendriks? Is there anyone the Blue Jays aren’t in on? Here’s what we’re hearing about the hottest MLB offseason topics. Jeff Passan &»

Sensing a legitimate chance to meet the Dodgers in the postseason, Preller made trade-deadline deals to acquire Clevinger, left-handed bat Mitch Moreland, catcher Austin Nola and closer Trevor Rosenthal. As is often the case in the postseason, it didn’t fully pan out for the Padres, but they exhibited a desire to go for it when they believed they had an opening. A pattern has now been established.

“The reality is, the Padres are never going to be able to compete financially and roster-wise completely with the Dodgers,” Preller said. “So what’s your next best option? Let’s do the best we can and if we get there, we can beat them in a seven-game series.”

That the Padres are even in this spot is a testament to the roster-building process they’ve undergone for years. These windows don’t stay open very long for organizations, particularly those that don’t have the Dodgers’ type of financial muscle. That’s why watching the Padres’ continued ascent could make for some of the game’s best theater in the coming years.