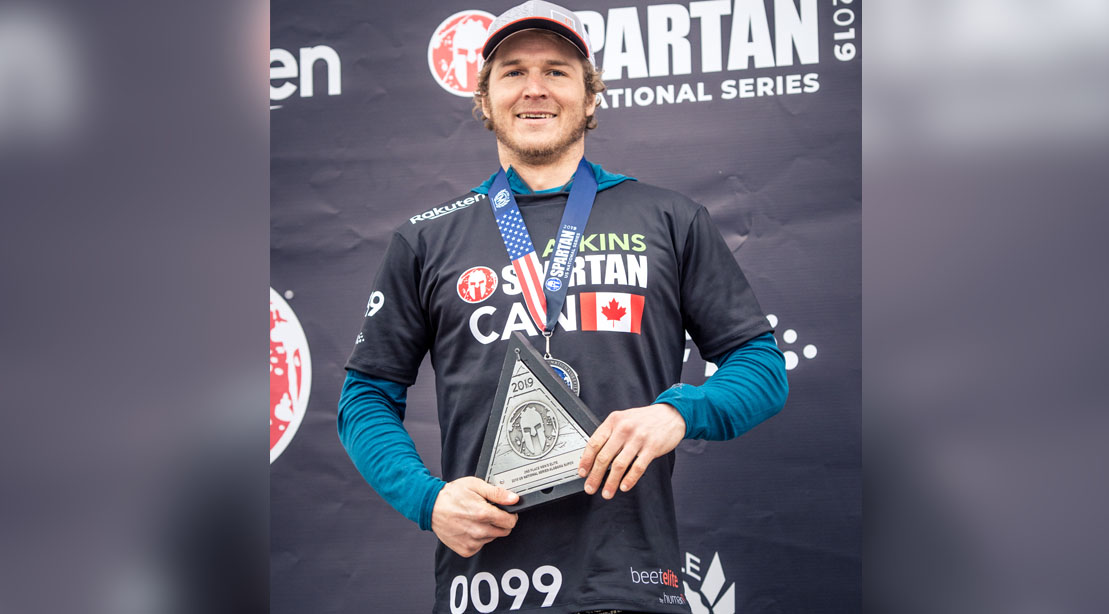 For an athlete who’s ascended heights the size of Mount Everest, why would it sound crazy that OCR superstar Ryan Atkins finds relaxation in sewing himself a comfortable sleeping bag?

Atkins is one of the world’s best OCR athletes on the planet. He’s the reigning Spartan Ultra World Champion, winning back-to-back titles in Iceland in 2018 and Sweden a year later, in the sports’s 24-hour winter event that is recognized as the hardest on Spartan’s Championship calendar.

For those not in the know, obstacle course racing — or OCR — is the ultimate athletic test for pushing one’s physical limits. Its races last anywhere from a few miles to ultramarathon lengths while competitors travel through any number of obstacles (think mud and barb wire).

Besides being defending champion, Atkins also won the first season of the Spartan Games , a five-day competition comprised of obstacle course racing, ultra-running, wrestling, functional fitness, and other competitions. Atkins holds the unassisted record for ascending the height of Mount Everest on foot. He accomplished the feat at a ski mountain in Sutton, Quebec — making the 8,848-meter ascent in 11½ hours. He’s completed the 7 Summits Challenge, climbing the equivalent height of the highest summits of each continent (Everest, Aconcagua, McKinley, Kilimanjaro, Elbrus, Vinson, Carstensz Pyramid).

He was also a member of the second-place team in “World’s Toughest Race: Eco-Challenge Fiji,” which is currently streaming on Prime video.

In between his high-octane and long-suffering workouts, which can go on for hours and hours, Atkins says any number of household hobbies, from woodworking to the peaceful process of putting needle to fabric and sewing his own hiking gear, give him the much needed mental break to balance each day’s intense training.

“I made the sleeping bag that I use,” Atkins says. “I made a superlight down sleeping bag with all the baffles and down and other lightweight material. That took me about 30 hours to figure out. And it’s awesome. I take it on hiking trips. So, yeah. Sewing is pretty satisfying.”

After starting out as a BMX racer, the Quebec native learned early on that he had penchant for physical punishment. Atkins won his first event —  a 50-kilometer race — without ever running that far in his life. So besides finding balance, Atkins explains in this week’s Winning Strategy how you can find your hidden talents and skillsets. He also shares what he’s learned climbing some of the world’s most difficult terrain that can help push you to your limit, while also alerting you on when it’s time to step back and give it a rest.

The Ultimate Champions’ Chest Workout
ASK ANDY: ‘What kind of workout should I do if I only have 30 minutes a day?’