Which team has the best group of pass-catchers?

That’s the word which best describes how I feel as I begin the assassination of my own reputation (if I ever had one to begin with).

You see, when content deputy editor extraordinaire Kristina Costabile asked which positional group I’d like to rank this week, I instantly, clearly not thinking, responded with ‘receivers.’

In fact, it was along the lines of do I dare?

RELATED
» Which team has the best group of linebackers?
» Roster Overhaul: New-look Argos eyeing top of East Division
» Previewing the 2021 Season: Everything you need to know

Well, I dare. And I dare you to tell me I’m wrong. I fully expect NOBODY to agree with this list, especially those who do not get the ‘best’ ranking, as I’ll keep the good-better-best status as I did for the linebackers.

The REDBLACKS definitely have a big three in RJ Harris, Brad Sinopoli and Jalen Saunders. But outside of those three, there is a lot to be desired for a team hoping to dig themselves out the basement.

Saunders is an excellent addition as he was one of my favourite receivers in the league when he topped the 1,000 mark a few years ago with the Hamilton Tiger-Cats, but that only is a saw off with the departure of Dominique Rhymes to BC. 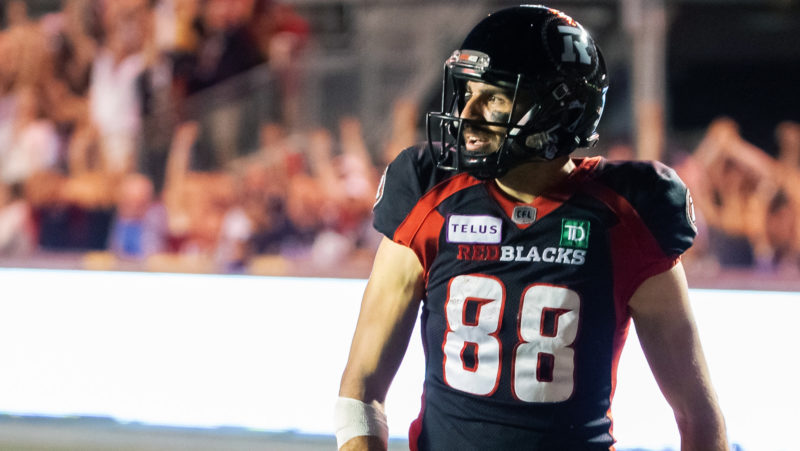 Anthony Coombs also arrives as a swiss army knife for Paul LaPolice’s offence. Think Nic Demski when trying to figure out where Coombs goes in the offence. If he stays healthy, he’ll be a huge plus for Ottawa.

Aside from this, the REDBLACKS need a lot of new faces to make a great first impression or Matt Nichols is going to have a hard time adjusting to his new surroundings.

The defending Grey Cup Champs didn’t have a 1,000-yard receiver in 2019 but it didn’t matter. They won by committee. Kenny Lawler, Darvin Adams, Rasheed Bailey, Nic Demski, Janarion Grant, Andrew Harris and Drew Wolitarsky are all back. There is only one player who isn’t back who caught a pass in their Grey Cup win in 2019: Chris Streveler.

This is another group that won’t jump off the page but the Bombers have been run heavy and why wouldn’t you with Andrew Harris in the backfield? I’m excited to see what Kenny Lawler and Rasheed Bailey do with a full season as starters. Lawler was the team’s 2019 Most Outstanding Rookie, and Bailey showed promise in the back half of the season in the first CFL action of his career.

GM Kyle Walters, meanwhile, has brought in over a dozen new faces to compete with plenty of jobs to be won or at least to join the practice roster as the next man up for the receivers.

The Calgary Stampeders receiving corps from 2019 included Eric Rogers, Reggie Begelton and Juwan Brescacin. It was widely regarded as a receiving corps near the top of the league. Well, now they’re all gone.

Hopefully we see Kamar Jorden coming off rehab of his knee and over a full year to strengthen further to climb back to one of the best receivers in the league. The Stamps will need it as, again, their depth will be tested as younger players like Josh Huff, Hergy Mayala, Markeith Ambles and Richie Sindani will be tasked to fill some big shoes. That being said, Mayala and Sindani have already shown the Stamps have the Canadians to replace Brescacin.

Departures hasn’t stopped John Hufnagel before as the Stamps are consistently able to bring players in to be the next star. That next star could be Aaron Peck, who had over 100-yards in two games in 2019.

Hufnagel has also brought in a tonne of American receivers, including NFL vet Ryan Grant, who has over 1,000 yards in his NFL career and also there is some family familiarity with Nick Holley. The Stamps are hoping the same happens with Nick as his twin brother Nate, who was the CFL’s Most Outstanding Rookie in 2019.

Yes, the Alouettes lost DeVier Posey but the good news is that B.J. Cunningham is healthy after the team missed him for most of the season in 2019. 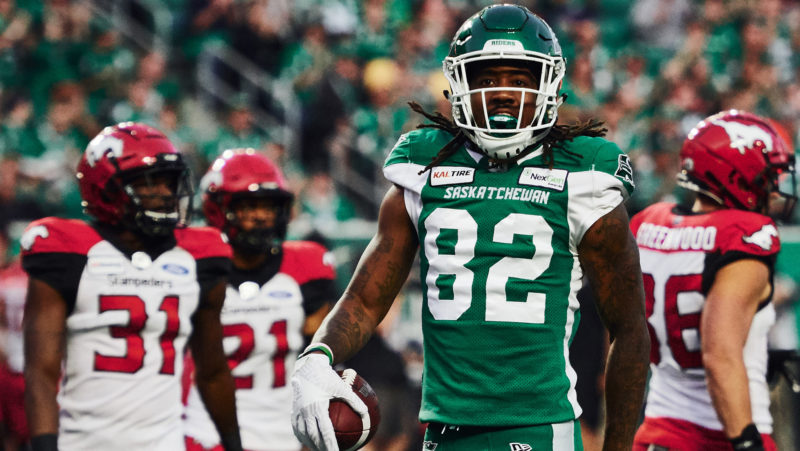 Naaman Roosevelt hauled in 946 yards and one touchdown in 2019 with the Riders (Arthur Ward/CFL.ca)

The Als were also busy in free agency over the last two off-seasons. They brought in one of the best second down receivers in 2019, Naaman Roosevelt, to help solidify some veteran savvy on a youthful, high flying offence.

Quan Bray has 1,000-yard potential and I believe Jake Wieneke does as well.

With Lewis, Bray, Roosevelt and Wieneke, the Montreal offence has some major questions on their depth and their Canadian talent. Without those two things there could be some extremely difficult days ahead for Montreal.

The Alouettes did join the party of bringing in someone with credibility from their NFL days as former Pittsburgh Steeler Eli Rogers is set to arrive in camp.

But in come Eric Rogers, Davaris Daniels, NFLer Martavis Bryant, Juwan Brescacin and Terrell Sinkfield Jr. Rogers, Daniels and Sinkfield are all 1,000-yard receivers in this league and not to mention Chandler Worthy, who in three games last season had a decent start with over 40-yards per game.

Three of these receivers in Toronto will be extremely familiar with the offence, as former Stampeders, where new head coach Ryan Dinwiddie cut his teeth as a coach.

Along with Martavis Bryant, the Argos have brought in another NFL vet in Kendall Wright at the age of 31 to see if he can add to the depth in Toronto along with a load of less experienced receivers behind them.

The Riders have the best big play receiver in the league in Shaq Evans. The deep threat has found his groove with Cody Fajardo and the pair have already been working out together this off-season to keep the chemistry going. If this was a QB/WR duo, Evans and Fajardo would be in the ‘best’ category.

But this is overall receiving group and there are some interesting story lines to follow as they could be one of the youngest up and coming groups in the league.

Kyran Moore gave Fajardo a reliable target and passes thrown to Moore was tops in efficiency in 2019. Then you have the 2018 West Division Most Outstanding Rookie nominee Jordan Williams-Lambert looking to redeem himself after a lacklustre few games returning from the NFL in ’19. The team is also excited about Carlos Henderson and Paul McRoberts, who caught the eye of the coaches all season, but were not able to make it on the roster on a regular basis.

They’ve also brought in some NFL experience with Sammy Coates, who averaged over 18-yards per catch down south.

On the Canadian side, the Riders have stacked the position in the last three drafts with Brayden Lenius, Justin McInnis, Kian Schaffer-Baker and Terrell Jana. They’re also hoping to see Jake Harty finally get to play after injuries the last two seasons.

I’ll start by saying how grateful I am that I can write a name for this team. The Elks enter the season with a tremendous amount of CFL experience. So much so that there isn’t room for them all.

Ellingson, Walker and Edwards were all 1,000-yard receivers in 2019. The two Smith’s were also topping 600-yards. To say Trevor Harris will have a lot of weapons would be an understatement. It’s a group of receivers that when you look at it on paper, it jumps off the page.

BC starts with one of all our favourite receivers in the league, Bryan Burnham. He is arguably the best of the complete package receivers with a combination of speed, size and a pair of hands that have made some of the most incredible catches in recent memory. He is also a second down must-have after leading the league with 38 second down catches in 2019. 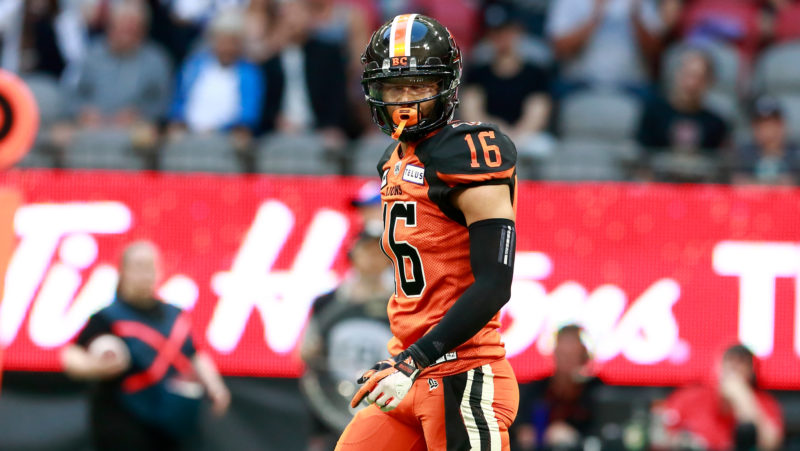 The Lions also have a great combination of Canadian receivers in Shaq Johnson and Lemar Durant and have now added the 10th leading receiver in 2019, in Dominique Rhymes, who was the top target in Ottawa last year with a 1,000-yard season and trailed only the Riders Shaq Evans in most yards per catch.

The Lions also brought in Lucky Whitehead from the Winnipeg Blue Bombers, who was a decent option underneath and who can make a big play out of nothing.

Outside of those five, however, there is a lot of curiosity of what they’ll get from some of the new faces. Maurice Harris has the most pro experience with 28 games and over 400-yards in the NFL.

The defending East Division champions welcome back their top four receivers from 2019. They’re the only team that can say that.

Defending MOP Brandon Banks is joined by Bralon Addison, Jaelon Acklin and Marcus Tucker. Oh and don’t forget about DeVier Posey. That is a dangerous attack! What Posey will bring to the Tiger-Cats, with the attention needing to be spread across the receiving corps, is frightening for opposing defensive coordinators to figure out how to handle this dynamic group.

The Tiger-Cats also picked up first overall pick and tight end Jake Burt in the draft, who comes in as a huge slot target for Dane Evans and Jeremiah Masoli.

The Canadian depth is a youth movement in Hamilton with Mike Jones and Anthony Coombs leaving.

Overall, the quarterbacks should be thrilled with what has arrived.