Steinberg’s MMQB: One key pending free agent for every team

We’ve got draft details. We have  a schedule. And now we have the first key date on the 2021 CFL calendar: free agency. Teams will be able to start signing free agents at 12:00 pm ET on February 9th, 2021, which puts our countdown at just over two months. And, starting today, teams can start signing their own pending free agents to avoid them hitting the market. It should be an interesting next number of weeks.

There are some interesting notes associated with 2021 free agency. It’ll be the second year with the communication window, which opens on January 31st. This window allows teams just over a week to talk and negotiate with players under contract with other clubs. Knowing we haven’t had football in more than a year, you can anticipate things to be busier than ever during that stretch.

The missed season also presents another interesting wrinkle. We saw plenty of player movement earlier this year in 2020 free agency and I was fascinated to see how big names were going to impact their new teams. Well, we might not see that in some cases, as a number of players who signed in new spots eight months ago are free agents once again.

Micah Johnson (BC), Alex Bazzie (Toronto), Patrick Levels (Hamilton), Richard Leonard (Calgary), and James Wilder Jr. (Montreal) are among the big name pending free agents after signing in new spots less than a year ago. I’m not saying all of these players are going to end up elsewhere, but it’s something to keep an eye on.

For this week’s column, I’ve highlighted one key pending free agent for each team. In most cases, it was difficult to select just one. As such, instead of deeming those I selected “the most important to re-sign”, I wanted to give a broad look at the type of players potentially available.

That means we’re not highlighting impact players like Greg Ellingson, John Bowman, Shaq Evans, and Simoni Lawrence, among others. Just remember: those guys are just as important to their team as the players we’re focusing on below.

Finally, the only specific criteria I used was that the highlighted player had to have played with their current team in 2019. That disqualified the likes of Johnson, Levels, et al mentioned above. Now, without further delay, here are nine crucial players their team needs to prioritize re-signing before February 9th.

The 2021 season has a great deal promise for the Lions, specifically on offence. Burnham is one of the driving forces behind that. 2019 was Burnham’s best year statistically, as he finished with 1,492 receiving yards and 11 touchdowns. But it’s not like it was a breakout year. Last season was Burnham’s fourth straight over 1,000 yards and third straight with seven or more touchdowns. The guy has turned into one of the league’s best and most consistent receivers.

The Lions will have a fresh, healthy, and rested Mike Reilly at quarterback in 2021. They’ve added exciting young receivers Dominique Rhymes and Caleb Holley (assuming they re-sign). But Burnham is the glue of BC’s attack: he’s as sure-handed as they come and runs crisp, reliable routes. The only way the Lions hit full stride on offence is with Burnham in the fold.

Vernon Adams Jr. got a ton of credit for Montreal’s resurgence in 2019, and rightfully so. On the defensive side of the ball, though, no one was more important than Muamba. With 93 tackles, Muamba finished second only to Hamilton’s Lawrence last season, and has racked up 201 total since joining the Alouettes for 2018.

As one of the CFL’s elite middle linebackers, so much of Montreal’s defensive success ran through him last year. The reigning Most Outstanding Canadian brings an important designation on his passport, too. As a national player at one of the most important defensive positions, Muamba is a true ratio-buster. That makes it even more important the Als have him back in 2021.

Just when it looked like the starting tailback job was Cooper’s for the taking, we ran into a worldwide pandemic and were unable to play in 2020. The good news for fans in Edmonton is, if he’s re-signed, that starting running back job still has Cooper’s name written all over it. That’s really positive, because Cooper looks like he’s ready to burst through a wide open door.

Cooper waited behind CJ Gable for two years and that patience looks ready to pay off. We’ve seen the potential in rare starting opportunities for Cooper. In the six games he’s started over two seasons, Cooper has averaged almost 83 rushing yards per game and over 5.5 yards per carry to go along with four touchdowns and a good chunk of usage in the pass game. Cooper will be 28 for the coming season and has the chance to really spark Edmonton’s offence. 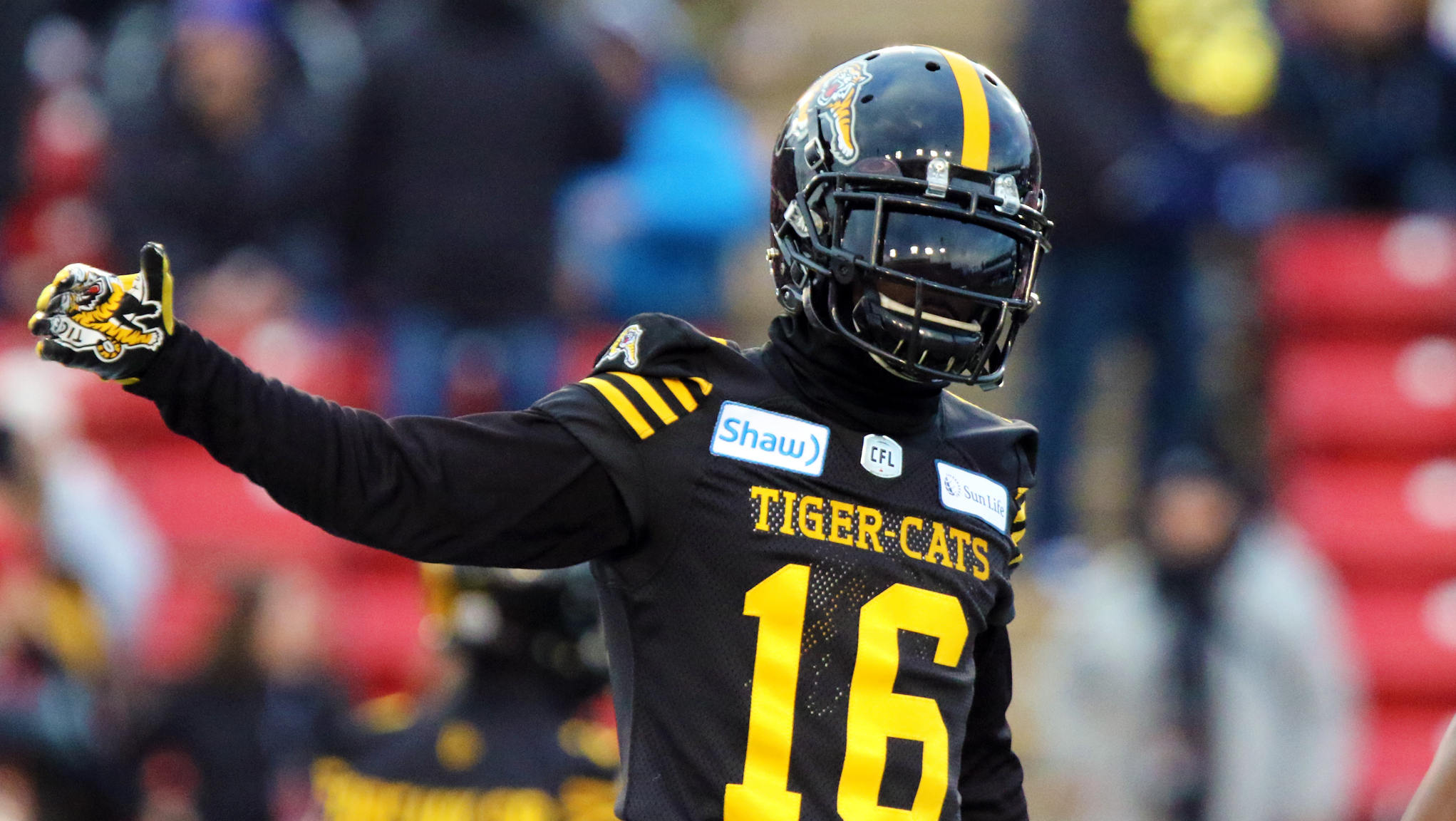 Brandon Banks has become the face of the franchise in Hamilton since joining in 2013. Will he continue in a Ticats uniform in a year where they host the Grey Cup 2021?

This one really does go without saying. Banks stands out in a star-studded group of Hamilton free agents that also includes Levels, Lawrence, Larry Dean, and Derico Murray. Knowing how deep the Tiger-Cats are on the defensive side of the ball, though, you could see a scenario where they could absorb losing one of those aforementioned players. I’m not sure the same is true for Banks.

Banks is the most explosive and dangerous player in the CFL. He led the league with 1,550 receiving yards despite missing two games in 2019. Banks missed four games in 2018 and still finished second with 1,423 yards. He has 32 total receiving touchdowns over the last three seasons, which just happen to be the first three full three years he’s been used as a feature player on offence. I don’t think I need to say more.

After playing just four games due to injury in 2018 and being cut loose by the Lions, Elimimian proved any doubters wrong with his first season in Regina. One of the greatest linebackers in CFL history proved he can still get it done last year. Elimimian led the Riders with 88 defensive tackles and finished third in the league overall. This all came while being limited in training camp and missing the first three games of Saskatchewan’s season.

Now with a full season off, a refreshed and motivated Elimimian has the chance to be just as crucial for the Roughriders as he was in 2019. Sask. boasts big names on the defensive side of the ball, including Ed Gainey, Charleston Hughes, and Loucheiz Purifoy. But knowing the position he plays, and the experience he brings, bringing Elimimian back this season has to be a priority for the Roughriders.

Ottawa selected Korte fourth overall in the 2018 CFL Draft, so we already knew he was a huge part of their future. But the 2021 season projects to be the biggest one yet for the pending free agent. Korte is the favourite to start at left tackle for the REDBLACKS this season, which is an important position any year. It’s even more crucial knowing what Ottawa did just under a year ago.

When the REDBLACKS acquired quarterback Nick Arbuckle from Calgary in January, it signaled a new direction. Ottawa is hoping Arbuckle is their long-term starter and having the right guy protecting him at left tackle is a huge part of that coming to fruition. It feels like it’s Korte’s time to shine. 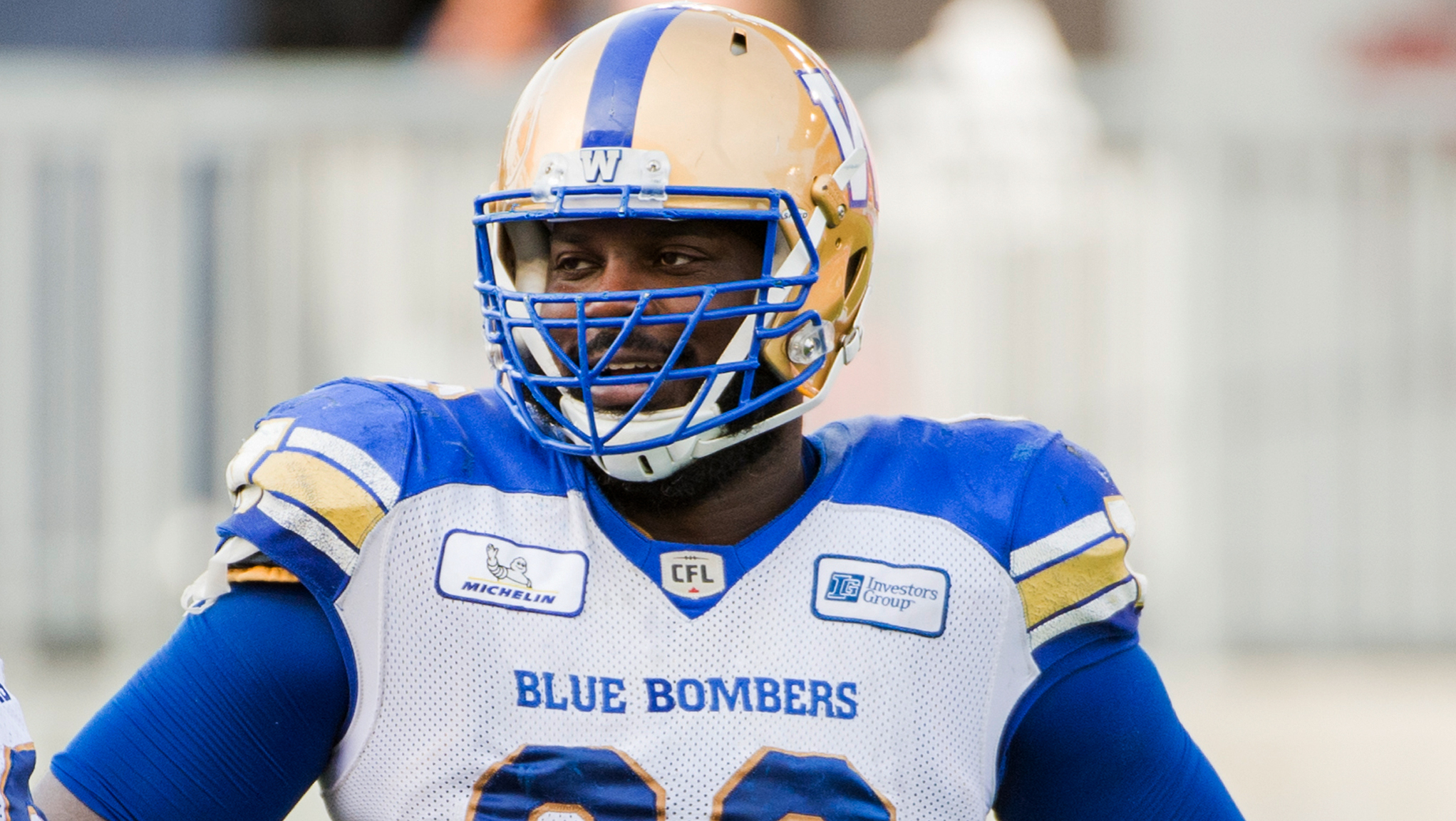 Stanley Bryant has been an anchor on a Winnipeg Blue Bombers offensive line that captured the Grey Cup in 2019 but he could hit free agency should he not re-sign before Feburary.

Winnipeg’s list of pending free agents also includes fellow All-Decade first teamers Andrew Harris and Justin Medlock, so by no means is Bryant the only, or most, important of the group. That being said, knowing what Bryant has accomplished since joining the Bombers in 2015, not having him in the fold this season would be a massive loss.

Bryant has been a CFL All-Star three years running in 2017, 2018, and 2019. He’s also been the West Division’s nominee for Most Outstanding Lineman those years, winning it twice and finishing runner-up in 2019. Elite and well-rounded at a crucial position, Bryant will be 35 for the 2021 season. That said, bringing him back is key if Winnipeg wants to take a run at repeating as Grey Cup champs.

New general manager Pinball Clemons made plenty of changes coming off a nightmare 2019 campaign. He has lots to figure out going into free agency in February, too, with the likes of Bazzie, Juwan Brescasin, Drake Nevis, and Chris Ackie all in need of new contracts. But part of the criteria here is players who played in Toronto last year, which is where Noel fits in.

The hometown product wasn’t used as much last season as in 2018, but I still think Noel has a ton of potential. He’s fast, dynamic, versatile, and also carries a Canadian passport. With Matt Nichols now in at quarterback, I’m curious to see what the Argos can unlock with Noel. He showed us two seasons ago he can be a dangerous option when called upon.

Coming off his best statistical season, the two-time CFL All-Star is poised for even more responsibility in 2021. With Brandon Smith’s retirement, Wall is now the savvy veteran in Calgary’s defensive backfield and will be looked to in an even larger leadership role than he already filled.

A mainstay with the Stampeders since 2012, Wall led the team with 67 defensive tackles in 2019, which is impressive knowing the position he plays. At the hybrid SAM spot, Wall meshed the duties of a defensive back and a linebacker as well as anyone and cemented his spot as one of the league’s most versatile players. Having him back in 2021 will be massive for Calgary.