TORONTO — The start of a CFL season, whether it’s kicking off in early to mid-June like we’re used to, or 20 months after the Grey Cup was last presented, oozes of optimism. Talk with any member of any team across the league and they’ll tell you why they like their chances and that anything this season is possible. The hot summer sky they stand under right now is the limit.

Our esteemed panel of voters for weekly picks — a group that some might argue consists of varying degrees of expertise — is no different. Whether you’re a player or prognosticator everyone is 0-0 right now, wide-eyed and hopeful about their own success this year. We’ll focus on the results eventually (probably once Week 2 hits) but it’s nice to just have games to pick again, isn’t it?

You can get your own picks in at CFL Pick ‘Em presented by TotalEnergies. For info on rules regarding streaks and prizes click here. 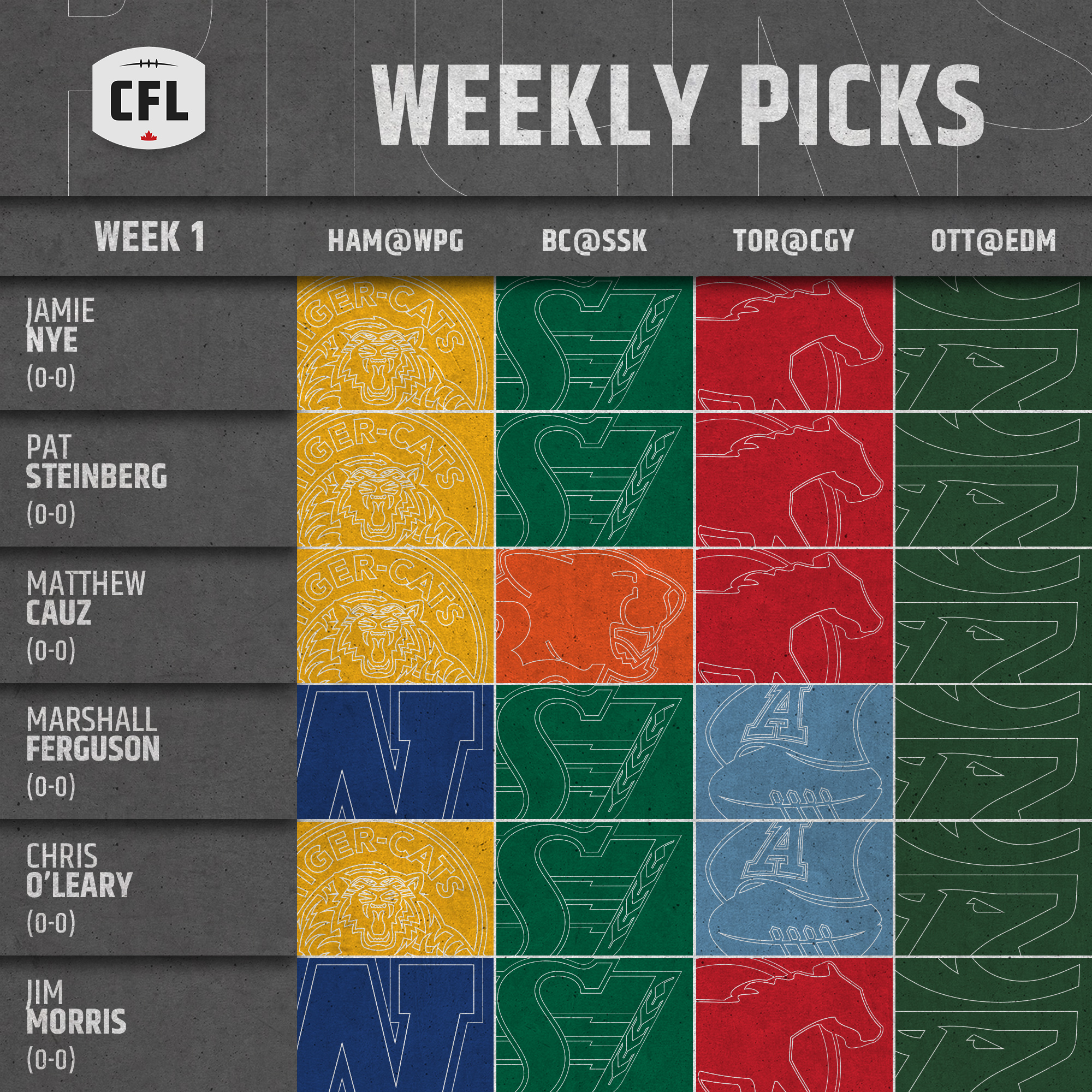 We pick up where we left off 20 months ago, with the Bombers celebrating their Grey Cup win (just one more time, for their banner raising) while they share the field with the Ticats. Of course, it won’t be exactly the same. The Bombers won’t have Andrew Harris or Darvin Adams in their lineup. The Ticats will be without Ted Laurent and Chris Van Zeyl, among others.

While there have been roster changes on each side for these teams, they’re probably the two best preserved rosters over the last 20 months. That makes sense when you consider where they finished the 2019 season but is also impressive given that we’ve had two off-seasons for players and coaches to look elsewhere for opportunities. Expect two amped up teams and a sold out crowd at IG Field ready to welcome them back.

Speaking of amped up crowds, there’s a big, rowdy one waiting for the Riders and Lions in Regina under some bright and sorely missed Friday night lights. The Riders’ faithful finally get to see what Year 2 of Cody Fajardo as their starter will look like, and just how much firepower that offence will have under the guidance of coordinator Jason Maas.

The Lions will be in search of answers, too. Can the o-line keep Mike Reilly off the turf at Mosaic? Can the d-line disrupt and make life difficult for Fajardo? Rick Campbell will have his team ready on Friday and the Lions will need to be on point, playing in an emotional and electric atmosphere.

The new-look Argos start what has the makings of an absurdly difficult schedule (at Calgary, at Winnipeg, vs Winnipeg, vs Edmonton, at Hamilton, vs Hamilton, at Saskatchewan) against a Stampeders team that has rattled off 12 straight wins against them. The last Argos win in Calgary came in 2013. So, historically the Argos are in tough to start their season.

The Stamps enter into this season with more question marks around them than usual, with new faces surrounding Bo Levi Mitchell on offence and a number of strong defensive starters replaced by less experienced ones on the defensive side of the ball. The Stamps still have Mitchell at QB, though and are coached by Dave Dickenson and the organization’s scouting has been at the front of the three-down pack for arguably a decade.

The Argos will have a lot to figure out as well. Ryan Dinwiddie said he wouldn’t announce his starting QB until Aug. 6 and in Wednesday’s practice, Nick Arbuckle was dealing with a glute injury. Then there’s the good problem of rolling out a roster that’s great on paper and watching it learn how to play together.

The REDBLACKS finally get to put their last-place finish of 2019 behind them on Saturday in Edmonton. Unfortunately it’ll be against an Elks team that’s got lofty goals and a lot of flashy pieces in its arsenal.

While we wait to see the extent of options that Matt Nichols — who has been limited in practice this week — has around him on offence, we should all know by now what Edmonton’s working with. Trevor Harris has pre-season MOP buzz building not just because of his abilities but the talent that’s around him. Derel Walker, Greg Ellingson and Armanti Edwards highlight a star-studded receiving corps and Canadians Kwaku Boateng and Mathieu Betts anchor a d-line that got younger and just as imposing while we were all away.

It’s flat in the prairies, but Ottawa might have some hills to climb on Saturday.