O’Leary: McManus to Flutie worked no matter the location

The foundation may have been put down a few years and two teams prior, but sometimes a spectacular duo deserves another moment in the sun, even if the moment we’re thinking of took place almost 21 years ago now.

Danny McManus and Darren Flutie are one of the CFL’s all-time greatest one-two punches. First paired together in BC, then reunited in Edmonton, they arrived in Hamilton in 1998, at this point in their time together having surpassed simple chemistry and moving on to alchemy.

Through their five years together in Hamilton, Flutie pulled in 372 passes from McManus, totalling 5,386 yards and 26 touchdowns. Perhaps their most important play in those years together came in the 1999 Grey Cup game. Leading Calgary 14-0 late in the first half of the 87th Grey Cup, Flutie got a step on Calgary DB Shadwick Criss. It was all he needed, as McManus lobbed a perfect pass to the back of the end zone. Flutie make a spectacular one-handed catch and helped put the Ticats up three scores to go into halftime. Hamilton went on to win 32-21.

RELATED
» Lions and the CFL mourn the passing of David Braley
» O’Leary: Ticats’ reunion takes on more meaning a year later
» Catch up on the first six episodes of Remote Reunion driven by Kubota 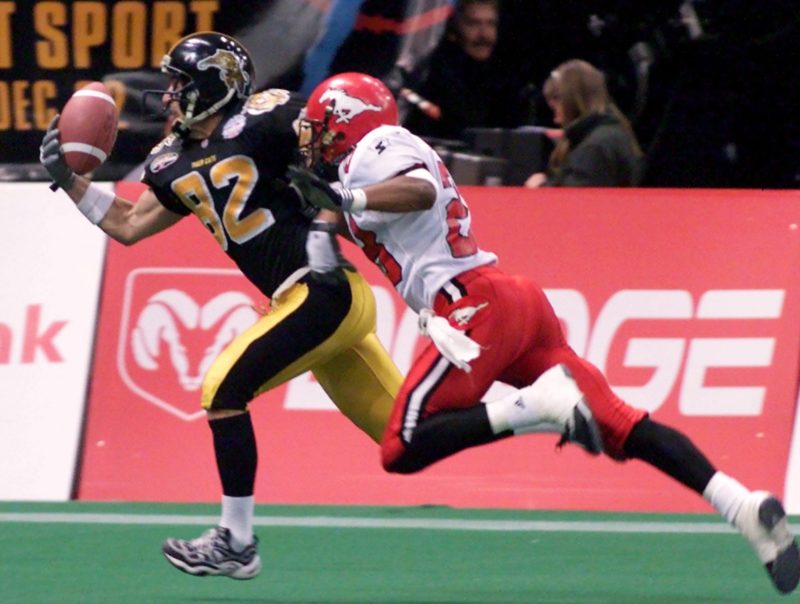 Darren Flutie made this high degree of difficulty catch in the 1999 Grey Cup game, helping the Ticats to a 21-0 halftime lead (Photo: The Canadian Press)

“Danny and I had a chemistry but it was the result of a lot of hard work,” Flutie told Dan Ralph of the Candadian Press in 2006.

“We’d spent a lot of time together after practice working to the point where he knew what I was going to do and I knew what he was going to do. We were both trying to get better and we both wanted to make a name for ourselves and the only way to do that is through hard work.”

That work started with the Lions. The duo was together there from 1993 to 1995. Flutie followed McManus to Edmonton for the 1996 and 1997 seasons before going to Hamilton together. While the diving, one-handed TD reception in 1999 was a pretty one, they both said that their work together in the 1994 West Final was a bigger moment.

There, McManus looked the short distance down a snowy field in Calgary and found Flutie through double coverage to give the Lions their first playoff win over the Stamps — who were heavy favourites in this one — in 30 years. Darren got the win over his brother Doug and the Lions went on to beat Baltimore in the Grey Cup game.

“I think that’s where we made a name for ourselves,” Flutie told Ralph. “We were huge, huge underdogs going into that game.”

By the time they got to the Grey Cup game in 1999, they had the sting of failure to the Stamps in their mouths for a full year. Both the quarterback and the receiver were in their prime and they were at the football equivalent of finishing each other’s sentences.

“It was like having another quarterback on the field,” McManus told CFL.ca’s Brodie Lawson in the ’99 Ticats’ Remote Reunion, driven by Kubota.

“He read coverages pretty much the same way that I did. There were a lot of things we did in practice maybe once and when we got in the game we were on the same page and we hit it.”
“The relationship that Danny and Darren had, I used to sit back and admire that every day in practice,” Ticats’ receiver Mike Morreale said during the reunion.

In 2017, Hamilton Spectator columnist Steve Milton wrote that this Grey Cup-winning Ticats team wasn’t one of championship moments. There wasn’t a decisive play in that Grey Cup game, no 13th Man like in 2009, no penalty on the return like the one that would shock the Ticats in the 2014 Grey Cup, no fumble like the Stamps might forever think of when they look back to the 2017 championship game.

It was a culmination of moments, a journey of seasons of close calls and disappointment and lows, written away by a team that collectively figured it out to close out the decade and the century with a win.

Ticat fans would rather not have to be patient, but their long waits — it had been a 13-year drought before they won it in 1999 and this cancelled season technically pushes the current drought to 21 years — are undeniably sweet when they are finally rewarded.

McManus and Flutie had to wait too, but their alchemy played a part in giving the fans what they’d yearned for.

“I’ve always said Danny was the best quarterback I ever played with, except for one,” Flutie told Ralph, referring to his hall-of-fame brother.

“Doug has a great football mind and feel for the game. But Danny had a great arm and a real fire for the game.”

O’Leary: Joey Moss was the heartbeat of a generation of Edmonton sports
Tait: Catching up with Bombers’ DC Richie Hall