O’Leary: Maxie, Stallions had their fun and won big

As he gets ready to look back on a team that dominated the CFL 25 years ago this month, Demetrious Maxie wants to get one thing clear.

The Baltimore Stallions’ defensive line needs a little respect on its name.

Specifically, the d-lineman that’s on the phone might deserve some credit.

Maxie was just a 20-year-old rookie on that Stallions team and as he tells it, was the best player on a tough defensive line, a key piece of a team that went 15-3 in the 1995 season.

Maxie was the only player on the team that day to sack Calgary Stampeders’ quarterback Doug Flutie. There may have been words like “young buck” and “old-ass men” thrown around as he described it, with the tone being at least 80 per cent in jest.

But that’s a minor detail when Maxie, now the d-line coach with the Edmonton Football Team, looks back on a team that’s a significant part of CFL history. The Stallions are of course, the only American team to ever win the Grey Cup. Led by coach Don Mathews, the Stallions were a group that had a ton of fun on the field and a lot more off of it. A group of them, including Maxie, reconnected for the Remote Reunion series, driven by Kubota. 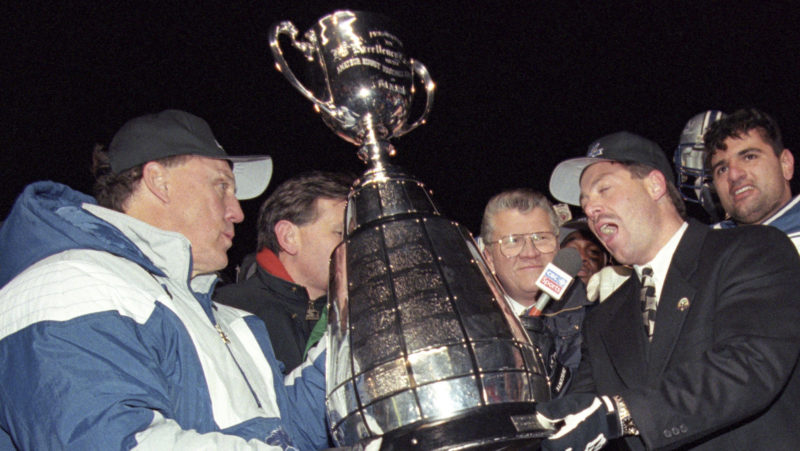 “It was probably the greatest experience I ever had as a pro football player,” Maxie said from his home in Mesa, AZ. He played for a mediocre team at the University of Texas El Paso and ended up walking into a very good pro situation at the tail end of the CFL’s U.S. expansion era.

“Going into that ’95 season when the Baltimore Stallions gave me an opportunity to go over there and continue to play football…man, that city embraced us, that town, that organization, it was first class,” he said of that season, which launched a 13-year CFL career.

When people think back to the U.S. expansion era, the shortcomings and ultimate failure of that time come up. There’s the infamous story of Anthony Calvillo working out for the Las Vegas Posse in a parking lot. There’s the one about the Shreveport Pirates sleeping above a barn at training camp.

But Baltimore was different, Maxie said. They played in the Colts’ old stadium and were comfortable with their facilities. They had a loyal, dedicated fan base that was happy to have some kind of pro football back, 10 years after the Colts had bolted to Indianapolis. Ultimately, the Stallions were a stopgap for the return of the NFL, when the Cleveland Browns moved in in 1996, months after the Stallions won the Grey Cup.

“I couldn’t complain because I believe our stadium in Baltimore was better than 90 per cent of the teams that were playing in Canada, except for Toronto, they had the Skydome and that was known worldwide,” he said.

It was interesting, though, learning the Canadian game as a rookie in the U.S.

“You’ve got to be in better shape, you’ve got to have an understanding for that yard off the ball. You’ve got to be ready to run sideline-to-sideline and the width of the length of the field. You had to play on special teams if you’re going to make that roster.”

He remembers learning the nuances of the Canadian game very quickly in his first game, which came against a BC Lions team that had beaten the Stallions in the ’94 Grey Cup.

“Being in Baltimore and playing in the CFL, it maybe changed my whole thought process on how in-shape I needed to be to play in the CFL,” he said.

He also quickly learned how badly his teammates wanted to avenge that Grey Cup loss. Lui Passaglia’s last-second field goal deprived the Stallions of a championship that past November. The year was fun, but the focus the entire time was righting the wrong from the year before. When game day arrived at the Grey Cup in 1995 — the first time that Regina had hosted the event — Maxie had no doubts about the outcome.

“The atmosphere, the good energy, everything about that team: How we practised, how we prepared for the game. I knew we were going to win a Grey Cup because we worked well together and we held ourselves accountable to whatever we had to do,” Maxie said, remembering Calgary beating them at McMahon Stadium earlier in the season, in the midst of an extended road trip.

“Going into that game, yeah, I knew we were going to win. We were a better team. We had better athletes, better coaches. Don Matthews was a motivator and he was a great influence on us because he allowed his athletes to play football and work around his defence. We really believed that we were going to win that game.”

Baltimore topped Calgary 37-20, pulling away from the Stamps in the fourth quarter. The Stallions made their history in taking the Grey Cup out of Canada, but were back across the border that off-season. When U.S. expansion ended, the Stallions moved to Montreal and became the Alouettes.