O’Leary: Joseph reminisces, wonders what might have been with Riders

Fourteen years later, Kerry Joseph doesn’t remember every granular detail of how he became a Saskatchewan Roughrider, but he remembers enough.

He’d just signed a contract extension with the Ottawa Renegades that came on the heels of a 2005 season that saw him throw for 4,466 yards and rush for 1,006 yards, both career bests. The Renegades weren’t much as a team, but Joseph had established himself as one of the top quarterbacks in the CFL.

Then the Renegades folded.

“I was in the back of a car somewhere. I was out of town,” Joseph recalled during some downtime in the Seattle Seahawks’ training camp this summer. Joseph joined Pete Carroll’s coaching staff in July.

“(Former Roughriders GM) Roy Shivers called me and we started talking about the dispersal draft and he asked me how I’d feel about coming to Saskatchewan and being a part of it. I told him I’d love it, I’d be glad to. I knew they had talent there, they had Danny Barrett who had done some great things over there.

“We had a good conversation and talked about my contract and the deal and we made it work out. It worked out real good for me.” 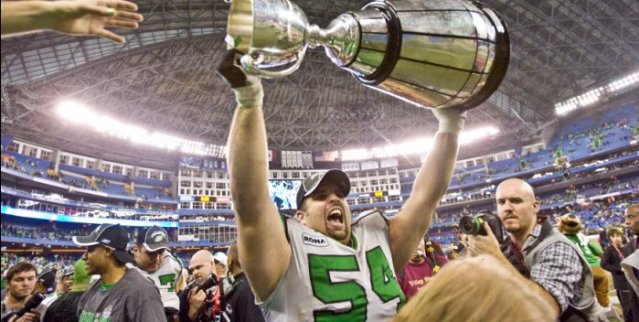 As Joseph and his Riders teammates from that vaunted 2007 team discussed in their Remote Reunion, driven by Kubota, it worked out perfectly. With Joseph at the helm, the Riders won just their third Grey Cup ever in 2007, beating Winnipeg 23-19 at Rogers Centre in Toronto.

Joseph remembered the team assembling in the 2006 season and seeing potential.

“When I walked in that room, you could see there were some guys in there with a chip on their shoulders,” Joseph said.

“When you think about across the board, from quarterback to defensive back they had some players. I felt real good about being in that role and really felt that was an opportunity to do something special.”

Those Riders went 9-9 but fell in the West Final to a BC Lions team that would go on to win the Grey Cup. The 2007 season brought change, as GM Eric Tillman — who’d taken over for Shivers midway through the ’06 campaign — hired former Riders’ QB Kent Austin as his head coach. That team clicked, going 12-6, with Joseph being named MOP and Austin winning coach of the year honours. 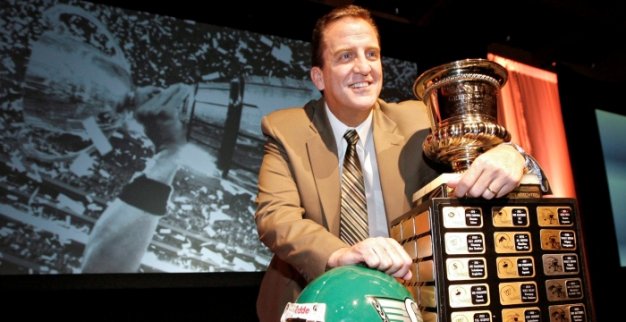 Riders great Kent Austin won coach of the year in 2007, on the same night that Kerry Joseph won MOP. The Riders got the trophy they came for a few days later at the Grey Cup (Photo: CFL.ca)

That the Grey Cup was in Toronto that year felt like just another star in a Riders’ green-tinted sky aligning. The Riders had won their last Grey Cup in Toronto in 1989, when Austin was their quarterback. On a more personal note for Austin, it was a return to the city where he’d served as the offensive coordinator for the Argos for the past three years. He won a Grey Cup with the organization in 2004, but was fired in 2006.

“We didn’t even think about that,” Joseph said. “We just focused on our end goal and that was winning the championship. Regardless of going back to Toronto to play the game, we didn’t talk about that. It was just, we’re here for one reason. We’ve got one goal and at the end of November it was to hold up that Grey Cup trophy.”

They held up that trophy, brought it back to Regina to celebrate with their ecstatic fans (“We had four well-earned days back in Regina,” was all Joseph would say about the extent of the celebration) and everyone in Saskatchewan went into the winter thinking about how their team would defend its championship.

Of course, that didn’t come to fruition. Joseph and Tillman couldn’t agree on a revised contract and when they reached an impasse, Joseph was traded to Toronto.

“Unfortunately, after winning the Grey Cup and MOP, it didn’t work out. It got taken the wrong way out in the media,” he said.

“I know some people looked at me the wrong way and I took a lot of heat, but I never fought back at it. I always said it just didn’t work out. Did I want to be traded? No. Did I want my money back? Yeah. Did I want to be the highest paid quarterback in the CFL? No. I just wanted what I felt that I deserved. And it didn’t happen.”

“I can tell you right now in 2020 I still think about it sometimes. What could have been.”

— Kerry Joseph on being traded to Toronto in 2008

Joseph played the majority of seven more seasons in the CFL, but he always has wondered what might have been had the trade not happened. What would the Grey Cup defence have looked like in 2008 and beyond in Saskatchewan?

“I can tell you right now in 2020 I still think about it sometimes. What could have been. Life is not fair and sometimes life throws you a curveball and you’ve got to swing at it. I just had to keep swinging and not let it really destroy me. I never said it publicly but I was I was bitter that I did all this for this team and there was nothing I could do about it after that. I couldn’t bring us back to that glory another year.”

When CFL fans think of Kerry Joseph, they’ll likely think of him that night in Toronto, raising the Grey Cup above his head, swarmed by his teammates and his coach, their place in history cemented. That’s how Joseph thinks of it too. He came back to the team for a short stretch to close out a tumultuous 2014 season, but it didn’t feel the same as it did in ’07, for so many different reasons. Winning hasn’t happened a lot in Saskatchewan. When it does, your name takes on a reverence in that province, especially when you’re a quarterback.

“It was great to bring that there, to bring the third (Grey Cup) and to be the third quarterback to do it and to do it with the one that that was the second quarterback to do it as our head coach,” Joseph said. “And to be on the same team with the fourth one that would do it (in Darian Durant, who led the team to the Grey Cup in 2013). There’s a lot of history with that ’07 team.”

O’Leary: Edmonton faced a daunting task in ’81 Grey Cup
Streveler thankful for CFL in transition south of the border