O’Leary: How the 2009 Als dipped into the fountain of youth

After enduring their share of Grey Cup disappointments, the 2009 Montreal Alouettes found the perfect mix of youth, experience, coaching and finally, winning.

“One of the reasons it was such a good team is that there was such a broad scope of age and experience,” former Als cornerback Davis Sanchez explained.

“You’d had those guys like (Scott) Flory and (Bryan) Chiu, and AC (Anthony Calvillo), (Ben) Cahoon and myself, who were there in the 2000 Grey Cup. Then you had the younger guys, like J-Rich (Jamel Richardson), Avon (Cobourne)…(John) Bowman, (Chip) Cox, like these guys are younger guys and brash and probably at that point in time, the best players on our team, mixed in with the old guys.

“I think that was one of the ways we were able to get over the hump, because we had those old guys that were good, guys that were hall of famers. But we needed that infusion of not only from Tres (head coach Marc Trestman) and what he brought, but then the young talent that came in 2007, 2008 and 2009. That’s kind of what got us over the hump.”

RELATED
» O’Leary: Dwayne Mandrusiak shares memories of Joey Moss
» Morris: Lions will have plenty of options for a GM hire
» Catch up on the first six episodes of Remote Reunion driven by Kubota 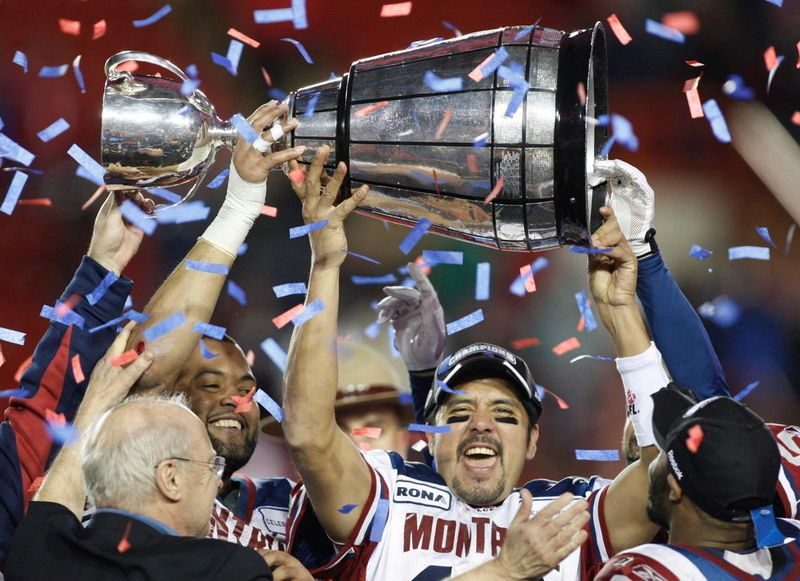 The Alouettes erased a 16-point deficit in the fourth quarter en route to their 2009 Grey Cup win (Photo: The Canadian Press)

That Als team had been to the Grey Cup plenty of times through the 2000s decade, but were getting in the habit of coming up short. They’d won in 2002 then lost in 2003, 2005, 2006 and 2008. After a dominant season that saw them go 15-3 and a demolition of the BC Lions in the East Final, they seemed poised to put their late November misfortune behind them.

Then came the Saskatchewan Roughriders.

The Riders stifled the Alouettes’ offence and built up a 27-11 lead, four minutes into the fourth quarter of the game.

“If anybody says that they had no doubt that they were going to come back and win that game, good on them,” Sanchez said, “but I certainly had doubt. It had happened before.”

The veteran portion of the team, along with Trestman’s ability to cover every facet of preparation, made the difference this time.

“Everything Tres says and does on a daily basis is well thought out. I think that’s how he builds his team, from training camp,” Sanchez said. “I think in Toronto they had a saying, brick by brick. He’s definitely the most well thought out coach I’ve ever been around on a day to day basis.

“As a group, you realize how much he’s putting into that, how much thought and effort he’s putting into every day, that end goal. As a group it gives you confidence of buying into the big picture that he has. That’s not normal for a coach. You think every coach has a plan. Tons of coaches come in and talk, but they don’t necessarily have a plan. They don’t know that their talk on Monday is a prep for what they’ll say on Wednesday, which leads to the final thought they’ll have on Friday before the game.

The Als knew what it felt like to let a game slip away on this big of a stage. In a season that they were so dominant, they knew how to get through that fourth-quarter deficit, even if the hill they were climbing was steep.

“I don’t really see that as adversity,” Sanchez said with a laugh. “Adversity needs time to set in, there was no time for that to set in. It was just play after play and here we go. I don’t know if we had time to realize that was adversity.

“We knew we were better than them. We thought we had more talent than them.”

They were of course aided by the Riders’ too many men penalty, which allowed Damon Duval to hit his second attempt at a game-winning field goal to complete the comeback. While that penalty and the wave of devastation it sent out over the Riders’ fan base was substantial, it’s not what the Als remember from that night in Calgary 11 years ago.

That Grey Cup was the third of Sanchez’s career. He’d add a fourth with his hometown BC Lions in 2011, but no matter where his career took him, the thought of Montreal was always fresh in his mind. When he was a co-host on The Waggle, he shared that he’d wished he could have spent his entire career with the Alouettes.

“I think if I look at other guys who spent their whole time in one place and even spend a good part of their off-season there (it’s different),” he said.

“Being able to play a pro sport for a team and represent that city, live in that city and be immersed into the city, whether it’s community programs or just the people and all that, that’s a special thing that not everyone, at a regular (job) at the bank or wherever else gets to do.

“I probably took that for granted and wanted to bounce and get home fast as soon as the season was over to hang out with my buddies.”

He thinks about the love that Montreal showed him, even in the years when he was only there for football season and wishes he could have had more of it. A little extra money offered by other teams seemed like the right thing to pursue at the time, but playing your entire career in one spot is special in itself.

“I would have way rather been in the same city the whole time,” he said. “You get to build that legacy too, right? For me, if I’d played there my whole career, I might be in the hall of fame, you might have the possibility of having your name on the wall. You bounce around…that makes those things tougher to do.”