There’s an old credit card ad that starts with Phil Jackson walking into a convenience store. The legendary basketball coach buys four scratch-and-win lotto tickets. The result of the first three is the same: Winner.

The clerk marvels at the Zen Master’s good fortune.

Jackson confidently scratches the fourth one, only to reveal a try again.

“The fourth one’s tough, huh?” the clerk says. Jackson agrees, nodding to his teams’ penchant for three-peats — two of his Chicago Bulls squads did it and when this ad was filmed his L.A. Lakers had just watched their quest for a fourth title fall short. He shrugs and leaves the store.

You have to wonder if the men in Edmonton’s locker room at the 1981 Grey Cup were thinking about just how tough four in a row can be. That team was dominant, racking up a league-best 14-1-1 record and marching all the way to the Grey Cup game in Montreal. On the other side of the ball stood the somewhat lowly Ottawa Rough Riders, a team that went 5-11, a record that stands to this day as the least successful team to make it to the very end of the season. 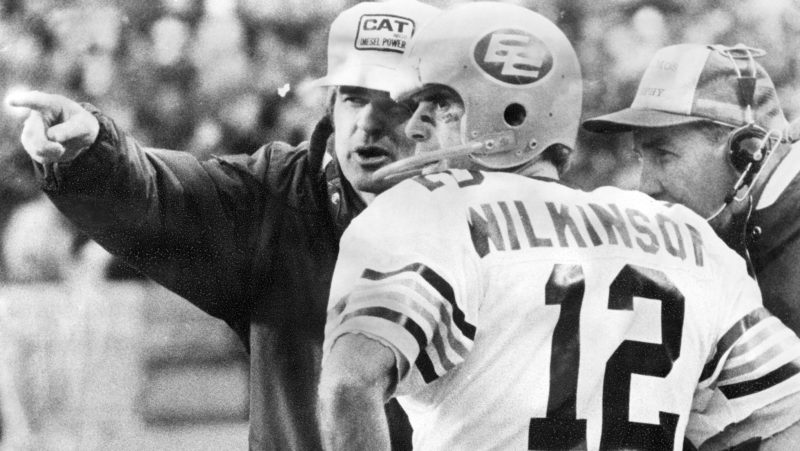 It’s the kind of match up that has you thinking the game could be over at halftime.

Humble pie, with a side of crow, maybe washed down with your favourite pundit’s overzealous words were widely available when halftime arrived on Nov. 22, 1981.

Edmonton, the 22-point favourite going into the game, trailed Ottawa 20-1. After three consecutive Grey Cup wins, a dynasty was in limbo.

“We got off to a terrible start in that ball game,” then-Edmonton QB Warren Moon told the Edmonton Journal’s John MacKinnon in 2015.

“At halftime, we just tried to gather the troops. Everybody had some great words of inspiration to talk about the second half and coach (Hugh) Campbell, as well.

Moon took over for his fellow hall-of-fame teammate, Tom Wilkinson as the first half slipped away. Campbell loved splitting up QB duties and used both of his pivots in the second half.

“We both, in the second half, played a big part in that comeback,” Moon told MacKinnon. “We just started clicking, we started executing better.

“And Ottawa was a very feisty bunch, no question about it. They played above their heads that day and it took everything we had to beat ’em.”

Through that nickel-and-dime offence, a ratcheted up defence and perhaps a fortuitous call late in the game — a deep J.C. Watts pass intended for Tony Gabriel was contested by Edmonton defensive back Gary Hayes and ruled pass interference on both players, negating the play — Edmonton was able to get in position to set kicker Dave Cutler up for a 27-yard field goal. He sailed the ball through the uprights with six seconds to spare, erasing the 19-point deficit and breaking a 23-all tie.

As it often turns out, the wise words of a convenience store employee ring true. The fourth one is tough and for most teams it proves impossible. Edmonton was spoiled by its success in the late ’70s and into the ’80s. The Oilers were probably even a more talented group and took control of the championship train in Edmonton starting in 1984, after the football team’s five-in-a-row run ended. The Oilers won back-to-back twice and capped it with their last Cup in 1990, but had their run interrupted twice by the Calgary Flames.

Another Oilers’ rival, the New York Islanders, won four Cups in a row from 1980 through 1983. In baseball, the New York Yankees won five World Series’ in a row from 1949 to 1953. The Boston Celtics won eight NBA titles in a row from 1959 to 1966 and in the NFL, no team has ever even three-peated. Prolonged success at the pro level is incredibly rare and more often than not, falls to tests like the one that Moon and his team encountered in the 1981 Grey Cup game.

That they were able to rebound from that first-half deficit and go out in 1982 and win a fifth championship is one of the most remarkable achievements in league history. Edmonton’s five-in-a-row squad is the benchmark of success in the CFL.